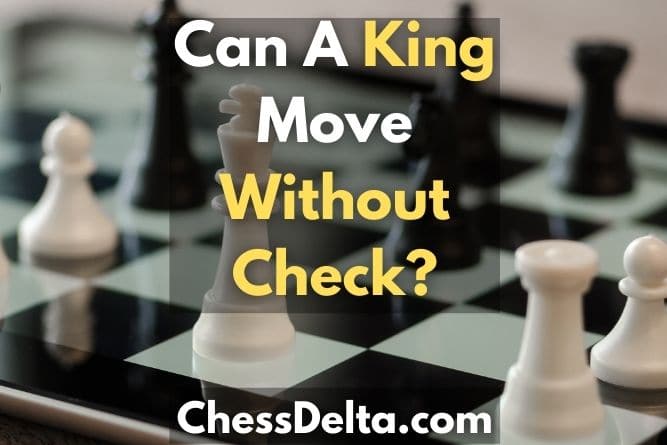 Often when you play chess, you get into check. You have to move your king to take it out of the check. But, can a king move without check?

Yes, a king can move without check. A king is free to move any time during the game as long as it doesn’t get into check which is illegal. There is no rule in chess that restricts the king to move until it is in check.

You might be thinking that a king can only move when it is in check. Until that, you can’t move your king. But it is wrong. You can move your king even if it is not in check.

Ahead, I’m going to explain to you what is a check, ways to get out of check, the rules you need to know regarding it, and some other necessary information.

If you are a beginner and want to know exactly How does the king move in chess? then I also recommend you to check that out.

This article will really help you to clear all your doubts, so please keep reading till the end.

But before that, do you want to increase your chess-playing experience? Then I highly recommend you to check out some of the best chess sets here. (on Amazon)

Don’t Miss Out Some Of The Best Chess Sets!

What is check in chess?

Check means a situation in which your king is under attack. So whenever your opponent attacks your king then you are said to be in check.

But don’t worry if you are in check there are ways to save your king out of the threat. Let’s discuss that!

What are the ways to get out of check?

There are three ways to take the king out of the threat:

The white king can either be moved to a safer square or a chess piece (here the black pawn on g2 square) can be kept between the piece giving check and the attacked king to get out of check.

However, the third option of killing the piece giving check is not available here.

So this is how the king can be saved from the check.

Also Read: What happens if the king cannot move?

Rules regarding king and check in chess

As per the standard rules of chess:

If you remember these few rules then I can promise you will never make any mistakes.

When can the king move in chess?

A king can move anytime during the game if while moving it doesn’t gets into check.

Here’ an example that shows when a king can move in chess.

So in similar situations, the king can move without check in chess.

When the king cannot move without check?

When moving the king puts it in check then the king is not allowed to move.

Here’s an example that shows when a king can’t move without check.

In this case, as you can see, it is the white’s turn to move and here also the white king is not in check. But can the king move?

Hence in this case and in similar situations, a king can’t move without check.

Read Related: Does a king have to be in check before checkmate?

Also, note that a king can’t move when it is checkmated. Checkmate means the king is in check but there are no legal moves left to save the king.

Moreover, there is also another case known as a stalemate in which the king is not in check but the player has no legal moves left to continue the game.

You can read more about these two concepts in my article the difference between stalemate and checkmate.

So that’s it! I hope you understood everything. If you found this article helpful then please consider it sharing with others. Thanks and have a nice day!

Can a king kill without check?

Yes, a king can kill without check. There is no rule in chess that restricts the king to kill until it gets into check. However, a king can’t kill if doing that puts it in check which is illegal.

Can a king move without checkmate?

Yes, a king can move without a check or checkmate. However, a king can’t move when it is checkmated. By definition, checkmate means that there are no legal moves left to save the king from the threat. The game ends immediately whenever a checkmate occurs.

Can the king attack in chess?

Yes, a king can attack and even capture the opponent’s piece. However, a king can’t attack if doing that puts the king in check because it is illegal.