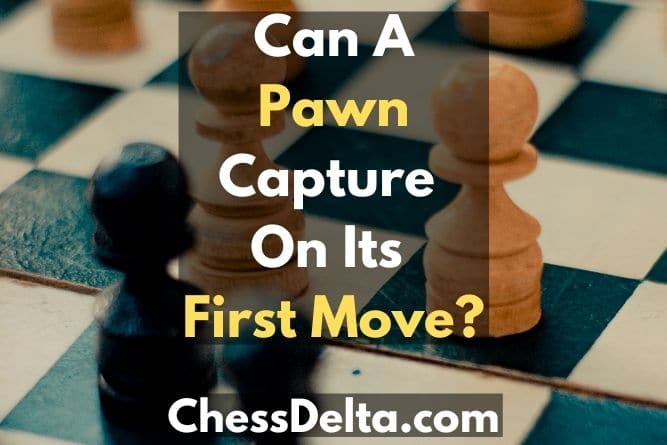 If you just started learning chess then at this stage you may be learning about how each chess pieces move. But while studying that, a question like this may come to your mind, can a pawn kill or capture on its first move?

Yes, a pawn can capture on its first move. However, the piece to be captured must be available on the adjacent diagonal square of the pawn in the forward direction. There is no rule in chess that restricts the pawn from capturing on its first move.

You may think that a pawn can’t kill on its first move. But it is wrong.

If you also have this misconception, then don’t worry. Because, in this article, I’m going to clear all your doubts about pawn moves in chess, when they can capture when they can’t capture, and other related questions.

So to understand everything properly, keep reading till the end!

Basics of pawn moves in chess

A pawn can either move one step forward or two steps on its first move from its starting position. A pawn can’t move backward in chess.

It is your choice whether you want to move your pawn one step forward or two step on its first move. There is no restriction of rules regarding that.

When a pawn reaches the other side on the last square of the chessboard then it gets the chance to be promoted and it is known as pawn promotion.

So whenever a pawn promotion occurs you can replace the pawn either with your queen, knight, rook or bishop.

You can read more about this in my article what happens when a pawn reaches the other side.

Note that pawns in chess always move in straight line except when they have to capture a piece.

How do pawns capture?

Pawns in chess capture any piece that is present on their immediate adjacent diagonal square in the forward direction. A pawn can’t move or capture in the backward direction.

This is a special rule and a little complex to understand especially if you are a beginner. But don’t worry I have written an in-depth dedicated article on en passant which you can check out for further information on it.

Can a pawn move forward without capturing?

Yes, a pawn can move forward without capturing as it is totally the player’s choice. However, a player is forced to capture with pawn if the player’s king is in check, and capturing the piece is the only way to save the king from the check.

In simple words, check means when your king is in attack.

Now, there’s a rule in chess that you can never ever make a move that puts or exposes your own king to check (attack).

Read More: What happens if you put yourself in check?

Also, once your king is in check, you can’t make any move unless that move saves your king from the check.

And there are actually three ways of saving the king from check:

So these are the three ways in which you can save your king.

Now as you can see, capturing the attacking chess piece is one of the ways to do it.

So if there’s a situation in which your king is attacked and the only option you would have is to capture the attacking chess piece with your pawn.

Then, in that case, you would be forced to capture with your pawn, and you wouldn’t have been allowed to move forward without capturing.

Are you getting my point? Let’s understand this with an example.

Let’s say, you are white and it is your turn to move, the position of the board is as shown in the figure:

As you can see, the white pawn on g2 square is on its starting position. So here you have two options:

It is totally your choice, which moves you want to make. And, since the king is not in check so you not forced to make a move for safeguarding the king first.

As per the standard rules, when a player’s king is in check then the player should first take the king out of check and then only make any other move.

Otherwise, that would be considered an illegal move.

Remember, once your king can’t be saved from the attack and gets checkmated, the game ends immediately.

In fact, the main goal of chess is to save your king and along with that make moves to checkmate your opponent’s king to win the game.

Then, in that case, you were forced to capture with your pawn. You couldn’t have moved forward without capturing.

But here, there’s no such issue. So you are free to move the pawn forward even without capturing.

So that’s it! Hope I cleared all your doubts regarding whether the pawns can capture on their first move or not. If you found this article helpful then please do share it with others. Thanks!

And, if you are looking for some cool funny chess gifts for chess lovers then also check out my article on the same.

Can pawns attack on first move?

Yes, pawns can attack on first move but only if the opponent piece is present on the adjacent diagonal square of the pawn in the forward direction.

Can a pawn choose not to attack?

Yes, a pawn can choose not to attack as it is not mandatory to attack always in chess. However, a player is forced to attack with a pawn if the player’s king is in check, and attacking is the only way to save the king from the check.

Can a pawn move forward and capture in one turn?

A pawn captures any piece only in the diagonally forward direction. When a pawn captures a piece, it moves forward and occupies the square of the captured piece as a part of the same turn.

Can pawns take from starting position?