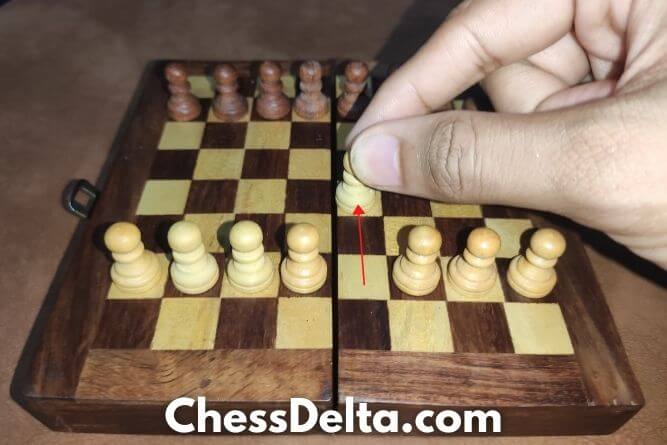 If you just started learning chess then you might get confused about the pawn moves. And one of the questions that come to your mind is, can a pawn move 2 spaces?

Yes, a pawn can move 1 or 2 spaces on its very first move. However, the pawn can’t be moved two steps once it has been moved already from its starting square.

Each player in chess has 8 pawns that are placed on the second row of the chessboard from the view of that player. So whenever pawns are placed on their starting square, they have the chance to either move two spaces or one space in the forward direction.

But as soon as the pawn completes its first move, now it cannot move two spaces. Throughout the entire game, the pawn can only move one step forward.

Continue reading this article till the end, because I will clear many of your doubts regarding the pawn moves.

Check out the best chess sets on Amazon here.

Can all pawns move 2 spaces?

However, don’t underestimate the pawn.

Yes, I agree that pawn is the least powerful but it has a special move in which it can promote itself to either a queen, knight, rook, or a bishop. And this is known as the pawn promotion.

To know more about pawn promotion see my article on what happens when a pawn reaches the other side.

Also, a pawn has a move called en passant. You can read more about en passant here.

Why can pawns move 2 spaces?

The ability of the pawn to move two spaces and its ability to capture en passant was added in the 15th century in Europe. (As per Wikipedia)

Remember, that pawns can’t move backward. They can only move in the forward direction.

So always be careful while moving them in your game. Because, once you have moved them, you don’t have any chance to retreat them back!

Can a pawn move 2 spaces diagonally?

No, a pawn can’t move 2 spaces diagonally. A pawn can only move one square diagonally in the forward direction only while capturing any chess piece.

If there are no pieces that can be captured, then the pawn can’t be moved diagonally.

Note that a pawn can capture at any time and even on the first move, provided other chess rules aren’t violated. See my detailed article on can a pawn capture on its first move.

Pawns can only moved to unoccupied squares. If the squares in front of them are occupied by your or your opponent’s chess pieces then they get blocked.

Pawn aren’t like knights that can jump over the other pieces. (You can see about the knight moves here)

How often can a pawn move two spaces?

As I have already talked about this a lot, there no need to do so, isn’t it?

Instead, let’s just summarize all the key points about the pawn moves.

So I hope your all doubts regarding whether pawns can move two spaces or one spaces, and all related doubts are cleared.

If you are a beginner in chess then you can check out my complete guide on how to play chess for beginners.

That’s it! If you found this guide helpful then please share it with others. Thanks 🙂

Can the second pawn moves 2 spaces?

Yes, even the second pawn can move two spaces. However, any pawn has the chance to move 2 spaces forward only on the first move after which they move only 1 space forward.

When can a pawn move two spaces?

A pawn can move two spaces only on its first move. After the pawn has made its first move, throughout the entire the it can move only one step forward.

What is it called when the pawn moves 2 spaces?

There’s no such standard terminology about the pawn moving 2 spaces. However, en passant is a move in which a pawn on its fifth row can capture the adjacent file opponent pawn if it has moved two spaces from the starting positon.