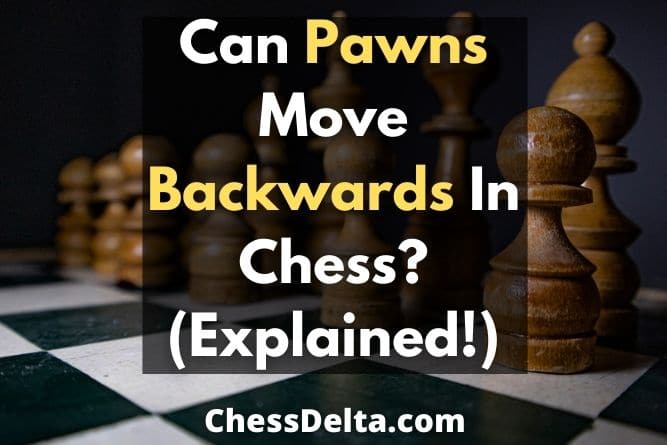 When you start learning chess, one of the first things you have to study is how the chess pieces move. And while studying that, a question comes to your mind.

Only on the first move, pawns can be moved two squares forward. Rest, during the entire game, pawns move only one square forward.

However, while capturing any piece, they move diagonally in the forward direction. In fact, pawns are the only chess piece that captures in a different way than they move.

Let’s dive in deeper and see more about the pawn moves.

Can pawns kill backwards in chess?

No, pawns can’t kill backwards in chess. Pawns can only capture any chess piece one square diagonally forward in either left or right direction.

Even if a pawn is blocked because of a chess piece in front of it. Still, it doesn’t lose the right to capture a piece in the diagonally forward direction.

Let’s see an illustration to understand how the pawn captures.

It is the white’s turn to move. So, as you can see in the above image, the white pawn (on the left side of the image) can capture the black knight (present on its diagonally right square).

Also, the white pawn (on the right side of the image) can capture the black pawn (present on its diagonally right square) even though its front position is blocked by the black knight.

Read More: Can a pawn kill on its first move?

In both situations, capturing the pieces is legal.

However, capturing those pieces if they were present in the backward direction would have been considered an illegal move. (You can read more about what is an illegal move in chess)

Now after discussing all these, you may be thinking why the pawns are not allowed to capture any piece backwards.

So let’s discuss that!

As per Wikipedia, chess originated by the 7th century AD and its earliest form is called chaturanga.

And, in chaturanga also, the pawn moved directly forward.

Now there are also two special moves of pawn that I want to share with you. One is en passant and another is pawn promotion.

So let’s start our discussion!

What is En Passant?

En passant is a special type of pawn capture in which one pawn captures the other adjacently present enemy pawn that moves two squares from its starting position.

As you can see in the above image, as soon as the black pawn moves two squares from its starting position, the white pawn captures it assuming the black pawn only moved one square.

En passant is a French word that means “in passing”.

Now, note that pawns were not allowed to move two squares forward right from the start.

The ability of the pawns to move two steps forward was added later on in the game.

However, this created a problem. This newly added rule allowed the pawns on their starting square to escape from the attack of the enemy pawn present adjacently, (by moving two squares from their starting position).

So to prevent this problem, the en passant capture rule was introduced along with the introduction of the rule that allows pawn to move two squares on the first move (source: En passant historical context Wikipedia).

And this is how the en passant became a special move of pawn.

I know this might be difficult to understand for you, especially for the first time. But don’t worry!

I have written an in-depth article on what is en passant in chess which you can check out for further reference.

What is Pawn Promotion?

As per the standard chess rules, when a pawn reaches the farthest square on the 8th rank, the player can promote it to either a queen, bishop, knight, or rook.

This is known as pawn promotion.

As you can see in the above image, as soon as the white pawn reaches the last rank then it can be promoted to either queen, knight, rook, or bishop.

So after you promote the pawn, it is removed from the chessboard and replaced by the newly promoted piece.

Note that a pawn can’t be promoted to a king or kept as it is a pawn. Once you get the chance of promotion, you have to promote your pawn.

I have already written an in-depth article on pawn promotion. Check it out if you are interested to know more.

And below are my articles related to pawn promotion which you may be interested to read:

So, here are the key points you must remember:

That’s it! Hope you understood everything and your all doubts are cleared.

If you are new to chess, I highly recommend you to check out my complete step-by-step guide on how to play chess for beginners.

And you may also like to read my following articles:

So what are you waiting for? Start playing chess games and enjoy!

Thanks and good luck 🙂

No, pawns can’t attack backwards. In chess, pawns are the only pieces that can’t move backwards. Pawns can move and attack any chess piece in the forward direction.

When can pawns take backwards?

Pawns can never move or capture backwards in chess. They only move one or two steps in the forward direction. Also, while capturing any piece pawns move diagonally forward one square.