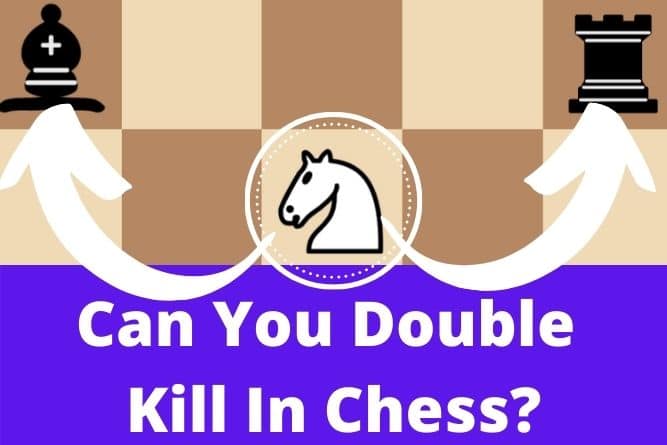 Sometimes in chess, you may notice that a single piece can attack two pieces simultaneously. But then a common question arises, can you double kill in chess?

The short answer to that question is: No, you can’t double kill in chess because then it would be an illegal move. However, you can double attack in chess. Double attack means attacking two pieces at the same time.

As per the standard rules of chess, you can only kill a single chess piece in one turn.

Ahead I am gonna discuss these all in more detail covering each and every aspect so that your all doubts are solved. Just relax and scroll down!

What do you mean by double killing in chess?

Killing means capturing any chess piece. In chess one can capture only a single piece at a time.

Generally, in checkers (which is also a famous board game and has some similarity with chess) you can capture multiple pieces in the same turn.

But in chess you can’t do so. You can capture only a single piece in one turn.

Also Read My Article: Can A King Kill A King In Chess? (All Doubts Solved!)

Why can’t you double kill in chess?

The major reason why double killing is not allowed is because then the balance in the game will be disturbed.

Chess is a game in which each piece has some unique property. A knight can move in l shape while a bishop can move only along the diagonals. A pawn is considered weakest but then it has two special properties: en passant and pawn promotion.

A king can castle as well as if the king is checkmated means you lost the game, so considering that angle king is very powerful.

Also Read My Article: Why Is The King So Weak In Chess? (Logical Reason)

A rook can move horizontally whereas a queen, the most powerful chess piece has the combined power of both a bishop and a rook. So each piece has so much strength as well as some weaknesses.

Now, all the chess pieces have certain power and using that we play chess and kill the opponent’s chess pieces.

Let’s suppose that double killing was allowed then either two things will happen: either it would be very easy to checkmate a king since double killing would increase the speed of the game and provide more flexibility. But then as we know easy games become boring.

Why do we play any game? To experience the thrill of accepting the challenge and fighting to win it. So will you like to play chess if it was very easy?

On the other hand, if it was allowed to double kill in chess then it might also become harder to checkmate the king. The king might be able to double kill and in some scenarios it would be easy for it to escape the check. Who knows! Both would be possible.

Do you think that is chess difficult? Should you learn chess? Then check this article by me: Is Chess Difficult To Learn? which will give you a complete overview of chess.

But one thing is sure that the balance would be totally lost. The enjoyment, the thrill a chess player experiences will vanish.

You may argue with me considering checkers. But my friend, checkers is somewhat similar but not completely.

In checkers pieces can move only diagonally while in chess each chess piece has some unique property. In checkers there are only 12 pieces unlike chess having 16 pieces. In checkers the pieces are arranged differently than what in chess…and many more differences as well. So what suits checkers doesn’t mean will be suitable for chess.

Now, you might also ask, were you allowed to double kill in Past when chess was in its early form, and that brings us to our next question.

Was Double Killing Allowed Before?

As per Wikipedia chess originated in India after which it travelled through Persia, Arabia and finally to Europe. Most of the chess rules that we follow today are said to have originated when chess reached Europe.

Names of many chess pieces changed, their movement changed as well as some new rules like en passant and castling were added. But despite that, so many changes and evolution of chess, you were never allowed to double kill in chess.

Also Read My Article: Why Are Chess Pieces Named What They Are? (With Facts)

How Double Attack Is Different From Double Killing?

Here’s an example of double attack. Let’s understand this pointwise:

This is how double attack is different from double killing in chess.

Also Read: Can You Capture Your Own Piece In Chess?

So that’s it! Hope you understood what is double killing in chess and why not to confuse it with checkers or double attack.

Now, I have shared some related questions about killing chess pieces. Reading that will clear many of your doubts so I recommend you to check that also.

Till then, Thanks and Good Luck!

Can you take two pieces in chess?

No, you can’t take two pieces in chess because it is illegal to capture more than one piece in a single turn. You can take as many pieces as you want during the game if it is legal to do so, but not in a single turn.

Can you kill more than one piece in chess?

The short answer is: Yes, you can kill multiple pieces in chess. However, you can’t kill more than one piece in a single turn.

Can two queens kill each other in chess?

Yes, two queens can kill each other. But you need to make sure that you are not violating any standard chess rules.

Can a pawn kill a king in chess?

Yes, but in perfect terminology, a pawn can’t kill a king but can check or assist in checkmating. There are no rules in chess that limit you to check or checkmate your king with your pawn. Read this article for further information.

Can a pawn kill a queen in chess?

Yes, a pawn can kill a queen in chess because there are no rules in chess that prohibits you to do so.

Can a pawn kill a rook?

Yes, a pawn can kill a rook and even any other chess piece. Just you have to make sure that your king is not in check or you are not violating any standard chess rules.

Can a king kill a rook in chess?

Yes, a king can kill a rook. But one thing you should keep in mind is you can never put your king into check deliberately. Otherwise, it would be an illegal move.

Can a king kill a queen in chess?

Yes, a king can kill a queen but only when that doesn’t put the king in check. Read this article for further reference.

Can a pawn kill on its first move?

The answer is: Yes, a pawn can kill on its first move. In fact due to this fact, during the starting few moves, it is not advisable to move your bishop too closer to the enemy pawns. Since you would not like to lose your bishop for a pawn early on in the game.

Can a knight kill a king in chess?

Technically, a knight can’t kill a king but rather delivers a check or helps the other pieces in checkmating the opponent’s king. One thing to note that you cannot check an opponent’s king with a single knight and a king.