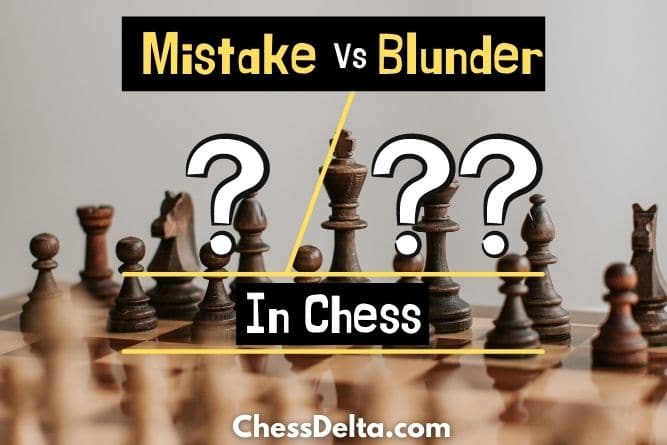 Are you confused to understand the difference between mistake and blunder in chess? Then don’t worry, because in this article I’m going to clear all your doubts along with examples.

All blunders are mistakes but not all mistakes are blunders. A mistake is just a mistake but a blunder is a big mistake.

In a game, we can make several mistakes and still not lose, but a blunder may cost us the game.

Now before I explain the comparison between mistake and blunder in chess, first let’s discuss each one of them one by one along with examples.

What is a mistake in chess?

A mistake in chess is a bad move played by the player. In chess annotation, a mistake is denoted by a single question mark “?” after the move.

In case you don’t know, chess annotation is a symbolic notation system used by the annotators (commentators) for explaining the chess games to the readers.

Moves that are considered to be a mistake, generally lead to loss of tempo or material and they are more strategic rather than tactical, in nature.

Example of a mistake in chess

Here are some of the common mistakes in chess:

Here’s a video by thechesswebsite, which shows the top 8 mistakes chess players make in their game. You can watch this video to get an idea about them and also to not repeat them in your own games.

What is a blunder in chess?

A blunder in chess is a very bad move that impacts the game such that you can even lose it. A blunder is a big disaster and often happens due to carelessness, overconfidence, or pressure of having less time during the time trouble.

Blunder in chess is denoted by the double question mark “??” after the move. A blunder results in an immediately lost position.

Beginners are common to make blunders, but also advance level chess players such as grandmaster make blunders in their game.

Moves that overlook a tactic to checkmate their opponent or win substantial material are often considered blunders.

If you have made a blunder then it means you have made such a huge mistake that your winning position has now transformed into a draw, basically a major setback for you.

You can imagine that blunder is such a big mistake that as soon as it occurs some chess players even resign.

Example of a blunder in chess

Here are some of the examples of blunders in chess.

Here’s a video by Chess.com, that shows you the top 5 blunders made by top chess players.

Whether to consider a move as a mistake or a blunder depends on the annotator and it is a subjective thing. But the player’s strength also plays a major role in this, as you would not expect a grandmaster to make the same bad move as a beginner would make.

So that’s it! Hope you are all doubts regarding the mistake and blunder in chess are cleared. Consider sharing this article with others if you found this helpful. And if you want to clarify more basic chess concepts and read interesting articles on general chess topics then read this section.

Till then thanks and best of luck for your next chess game!