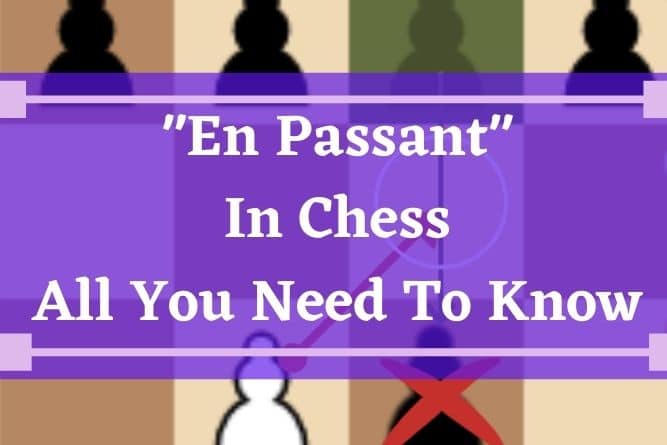 En Passant, whether you heard this word for the first time or you already know something about it. This guide is going to help you understand all you need to know about it.

I did complete research about en passant and here, I’m going to share with you everything that I have learned. So let’s start!

What Is En Passant In Chess?

En passant, in simple words, is a rule in chess according to which a pawn can be captured immediately after it moves two squares from its starting square by the enemy pawn. The enemy pawn captures the pawn assuming it moved only one square.

The word En Passant is derived from the French expression which means ‘in passing’. It is denoted by “e.p.” in standard chess notation.

This is the only capture in chess in which your piece does not occupy the square it captured the opponent’s piece. In general, when you capture a piece you occupy the position of the captured piece but here it is a little different.

As you can see in the above image, it is the white’s turn to move. Black’s pawn moves two squares (hoping to escape being captured). White’s pawn executes the en passant rule and occupies the square g6 assuming the black pawn moved only one square as per the rule.

What Is the Point Of En Passant In The Game Of Chess?

The main point of en passant in the game of chess is to prevent the opponent’s pawn from advancing two squares from its starting square and escaping the capture by your pawn (on its 5th rank of the adjacent file) which could be possible if the opponent’s pawn moved only one square.

Although this change was successful, there arose a major flaw as discussed above. The pawn on its starting square could easily escape from being captured by the opponent’s pawn on its 5th rank of the adjacent file.

So to avoid this issue and make the game balanced this new rule was made in the 15th century in Europe.

Also Read: Why Chess Pieces Are Named What They Are? (With Facts)

How Many Times Can You En Passant?

A player can do en passant only on the move immediately after the enemy pawn makes the double-step move from its starting square and provided the player’s pawn is on its 5th rank. Otherwise, the right to capture it en passant is lost.

But the player is still free to do en passant if still has any chance. There is no such rule about how many times en passant can occur in a game. Only the player needs to meet the required conditions to do the en passant.

Tip 🙂 – You might already know that by checkmating a king you win the game, right? But can you checkmate a lone king with a king and one knight? Just think and if you are interested then definitely check the article.

How Do You Do An En Passant?

You can watch this video by Chess Talk about en passant.

Is En Passant Legal In Tournaments?

The answer is: Yes, definitely it is legal in tournaments because it is mentioned in the FIDE laws of chess. FIDE is the International Chess Federation.

Here are the key points you need to keep in mind about en passant:

One of the most important things that you may forget is, the rule must be executed in the immediate next move.

Let’s suppose that you got a chance of en passant capture but your more valuable piece is already in threat of capture.

So what will you do? Obviously, save the more valuable piece! But after that, if you think that I could now perform the en passant then sorry because you lose the right to do so.

But yes with any other pawn you can do en passant. However, here also you have to execute it immediately otherwise you will lose the right you capture using en passant.

I hope you got all my points clear. You can also read my article: Is En Passant Legal in Chess?

Also Read: Can A Pawn Take A Queen?

Though rare, en passant is still useful because you can gain a major tactical advantage by using it in certain positions. For example, you can block the pawn movement of your opponent from its starting square and you can also avoid your opponent’s pawn from getting promoted.

Your opponent will never be able to move its pawn two squares if you have a pawn in its adjacent file with the scope of en passant, right?

If the opponent does then you will immediately use en passant and capture its pawn. So the opponent will hesitate to move it and therefore you are kind of blocking its pawn.

In that condition, if you have a pawn on the adjacent file then you can capture the opponent’s pawn by using the en passant rule in the very beginning and thus not giving any chance to promote that piece later on.

Thus by using this rule you can get a major advantage in some situations.

Also Read: Can A King Kill A King In Chess? (Solved!)

When Should You Do En passant?

There is no specified time. You can do en passant anytime as long as you get any advantage over your opponent. Like any other move in chess, you should play en passant only after proper evaluation of your present situation on the chessboard.

Can You En Passant With Chess Pieces Other Than Pawns?

The short answer is: No, you cannot en passant with a bishop, knight, rook, or a queen because as per the standard chess rule is only applicable for pawns.

As I already talked about that all the rules of chess are mostly followed as per FIDE. So it is very clear that you can’t do that with other chess pieces.

Apart from pawn promotion, en passant is one of the unique properties of pawn that makes it so special.

So that’s it! I hope you are now well familiar with this special rule of chess known as ‘En Passant’.

I hope you enjoyed a lot, reading this article as much as I liked sharing all the information with you.