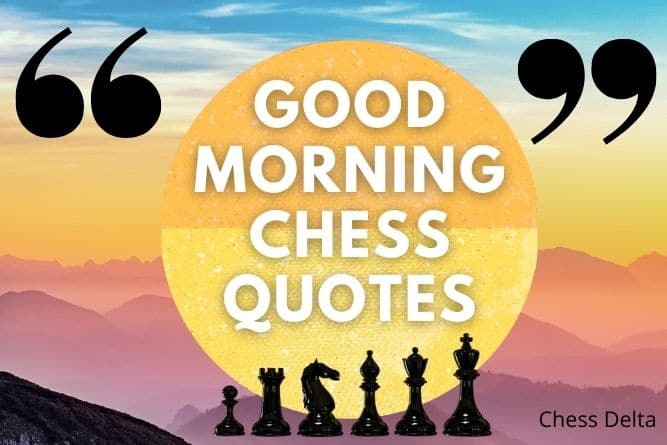 Are you looking for best good morning quotes related to chess? Then you are in the right place!

In this article, I am going to share with you the collection of the 51 best chess quotes along with ready to share images. These quotes are motivational as well as inspiration.

One side note: In all the quotes I am going to share, I have added the word ‘Good Morning’ wherever it suited well. Rest everything is as it is and mentioned with the source name in brackets. Thanks!

So without further ado let’s start!

#1. “Avoid the crowd. Do your own thinking independently. Be the chess player, not the chess piece.” Good Morning! (Ralph Charell)

#2. “Critical thinking is the most important factor with chess. As it is in life, you need to think before you make decisions.” Good Morning! (Hikaru Nakamura)

#3. “Chess is not for timid souls.” Good Morning! (Wilhelm Steinitz)

#5. “Whoever sees no other aim in the game than that of giving checkmate to one’s opponent will never become a good Chess player.” Good Morning! (Max Euwe)

#6. “In chess, knowledge is a very transient thing. It changes so fast that even a single mouse-slip sometimes changes the evaluation.” Good Morning! (Viswanathan Anand)

#8. “The human element, the human flaw, and the human nobility – those are the reasons that chess matches are won or lost.” Good Morning! (Viktor Korchnoi)

#9. “That’s what Chess is all about. One day you give your opponent a lesson, the next day he gives you one.” Good Morning! (Bobby Fischer)

#10. “In chess, you try to do your best, but there are instances where you make mistakes or you try and take risks that you shouldn’t. And I think losing games is a good thing because you learn more from when you lose than when you win.” Good Morning! (Hikaru Nakamura)

#11. “In life, unlike chess, the game continues after checkmate.” Good Morning! (Isaac Asimov)

#12. Good Morning! “The most interesting thing to me in chess is not the gambits. Or the moves. It’s the mental toughness.” (Edward Zwick)

#13. Good Morning! “Chess is the gymnasium of the mind.” (Blaise Pascal)

#14. Good Morning! “Chess is a war over the board. The object is to crush the opponent’s mind.” (Bobby Fischer)

#15. Good Morning! “I am convinced, the way one plays chess always reflects the player’s personality. If something defines his character, then it will also define his way of playing.” (Vladimir Kramnik)

#16. Good Morning! “I spend hours playing chess because I find it so much fun. The day it stops being fun is the day I give up.” (Magnus Carlsen)

#17. Good Morning! “There are more adventures on a chessboard than on all the seas of the world.” (Pierre Mac Orlan)

#18. “You can only get good at chess if you love the game.” Good Morning! (Bobby Fischer)

#19. “When you’re lonely, when you feel yourself an alien in the world, play Chess. This will raise your spirits and be your counselor in war.” Good Morning! (Aristotle)

#21. “In life, as in chess, one’s own pawns block one’s way. A man’s very wealth, ease, leisure, children, books, which should help him to win, more often checkmate him.” Good Morning! (Charles Buxton)

#22. “Chess is life and every game is like a new life.” Good Morning! (Eduard Gufeld)

#23. Good Morning! “Chess is the art which expresses the science of logic.” (Mikhail Botvinnik)

#24. “When the chess game is over, the pawn and the king go back to the same box.” Good Morning! (Irish Saying)

#25. “Chess is played with the mind and not with the hands.” Good Morning! (Renaud and Kahn)

#26. “In chess, one cannot control everything. Sometimes a game takes an unexpected turn, in which beauty begins to emerge. Both players are always instrumental in this.” Good Morning! (Vladimir Kramnik)

#28. “It’s an entire world of just 64 squares. I feel safe in it. I can control it; I can dominate it. And it’s predictable. So, if I get hurt, I only have myself to blame.” Good Morning! (Walter Tevis)

#31. “Daring ideas are like chessmen moved forward. They may be beaten, but they may start a winning game.” Good Morning! (Johann Wolfgang von Goethe)

#32. “Life is a lot like chess,” he said….”All a matter of choices. Every move you face choices and every choice leads to different variations. It branches and then branches again, and sometimes the variation you pick isn’t as good as it looked, isn’t sound at all. But you don’t know that until your game is over.” Good Morning! (George R.R. Martin, Dreamsongs, Volume 2)

#33. “Our parting was like a stalemate….Neither of us won. Yet both of us lost. And worse still … that unshakable feeling that nothing was ever really finished.” Good Morning! (Ranata Suzuki)

#34. “As a rule, the more mistakes there are in a game, the more memorable it remains because you have suffered and worried over each mistake at the board.” Good Morning! (Viktor Korchnoi)

#35. “In chess, without the king, the other pieces would all be “dead”, so their existence is supported by the king, but they need to serve the king with their capacity for action in order to have a good game.” Good Morning! (Roumen Bezergianov)

#36. “Life is short, precious, and should not be wasted. Everyone has a chance at it. We’re equals after all. There are no pawns, no kings, and no queens. We’re all humans and we all have the same value.” Good Morning! (Cristelle Comby)

#37. “The art of chess is in knowing which is the most valuable piece in play, then having the courage to sacrifice it for the win.” Good Morning! (Thomm Quackenbush)

#38. “The move is there, but you must see it.” Good Morning! (Savielly Tartakower)

#39. “The cherished dream of every chess player is to play a match with the World Champion. But here is the paradox: the closer you come to the realization of this goal, the less you think about it.” Good Morning! (Mikhail Tal)

#40. “Zugzwang. It’s when you have no good moves. But you still have to move.” Good Morning! (Michael Chabon)

#41. “Sometimes, as in a game of chess, we must strategically regress so that we might progress toward our ultimate objective.” Good Morning! (Crystal Woods)

#42. “One doesn’t have to play well, it’s enough to play better than your opponent.” Good Morning! (Siegbert Tarrasch)

#43. Good Morning! “If your opponent offers you a draw, try to work out why he thinks he’s worse off.” (Nigel Short)

#44. Good morning! “Check your moves well, because it can cost one pawn or losing a lot of just from three moves!” (Deyth Banger)

#46. “The reason I like the game chess is because each move has countless repercussions, but you’re in charge of them. And it’s your ability to see into the future and the effects of the decisions you’ve made that makes you either a good or not a good chess player. It’s not luck.” Good Morning! (Bono)

#48. “A relationship is a game of chess.” Good Morning! (Sophie Kinsella)

#49. “Of chess it has been said that life is not long enough for it, but that is the fault of life, not chess.” Good Morning! (William Napier)

#50. ““Chess teaches foresight, by having to plan ahead; vigilance, by having to keep watch over the whole chess board; caution, by having to restrain ourselves from making hasty moves; and finally, we learn from chess the greatest maxim in life – that even when everything seems to be going badly for us we should not lose heart, but always hoping for a change for the better, steadfastly continue searching for the solutions to our problems.” Good Morning! (Benjamin Franklin)

#51. “Of course, errors are not good for a chess game, but errors are unavoidable and in any case, a game without errors, or as they say ‘flawless game’ is colorless.” Good Morning! (Mikhail Tal)

So that’s it! Hope you liked reading the collection of these beautiful good morning chess quotes. If you found this interesting then don’t forget to share this with others. Thanks!

What is the motto of chess? The main aim of chess is to checkmate the opponent’s king and win the game. The motto of the World Chess Federation (FIDE) is “Gens una sumus” which means “We are one people”.

What are some chess terms? Some of the most popular and commonly used chess terms are names of each of the chess pieces: King, Queen, Pawn, Knight, Rook, Bishop, and terms like ‘Check‘, ‘Checkmate‘, ‘Stalemate‘, ‘Castling‘, ‘Pawn Promotion‘.

How is life like a game of chess? “Life is a lot like chess” he said…. “All a matter of choices. Every move you face choices and every choice leads to different variations. It branches and then branches again, and sometimes the variation you pick isn’t as good as it looked, isn’t sound at all. But you don’t know that until your game is over.” (George R.R. Martin, Dreamsongs, Volume 2)