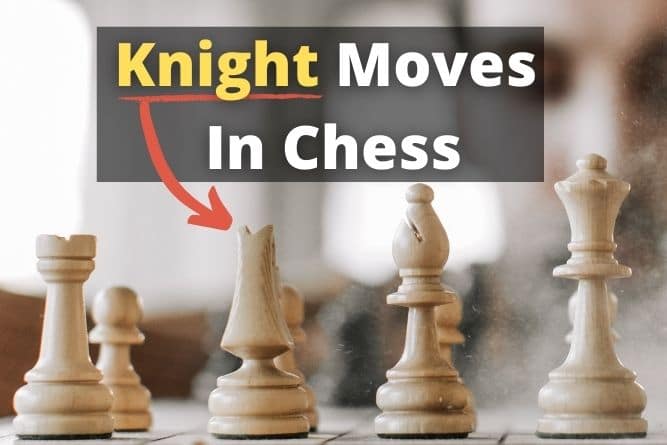 In chess, each chess piece has a unique movement. But out of all, the movement of the knight is completely unique, which often makes it the most confusing chess piece, especially for beginners. But don’t worry!

In this article, I’m going to cover from start to finish all the questions and doubts regarding the movement of knights in chess. So continue reading till the end!

How does the knight move in chess?

A knight moves in a typical ‘L’ shape. Two squares vertically and then one square horizontally or vice versa.

Can a knight move first in chess?

Yes, a knight can move first in chess. A player can only move either the pawns or the knights on their first move and many prefer to move the knight instead of the pawn.

The process of taking the pieces out of their original square and putting them on the board on a more effective square is known as developing the pieces.

Knights and bishops are considered as minor pieces and it is advised to develop them first and then the major pieces such as the queen and the rook and gain the control over the centre of the board.

I highly suggest you to check out my article 11 Best Chess Opening Principles For Starters: Step By Step to know more.

Can knight jump over 2 pieces?

Yes, the knight can jump over 2 pieces as long as the two pieces are on the first two squares of the knight’s path of movement. If the piece of the same color is occupying its landing square then the knight can’t be placed on it.

Landing square means the square on which the pieces are finally placed when the move is completed. As per the standard rules, you can’t move your piece to a square already occupied by one of your pieces.

Yes, if the opponent pieces are occupying that square then you can remove them and place your piece and this is what we call a ‘capture’ or ‘taking’ or ‘killing’ a piece in chess.

This is because it would be then considered as a violation of the standard rules and hence an illegal move.

Why do knights move in L shape?

There are no reliable sources from which mentions the exact reason of why do knight moves in L shape. As per the book Play Winning Chess by Yasser Seirawan, since chess was invented, the movement of knights remained the same.

It was known as a horse in India, Persia, and Arab while in Europe the horse acquired rider and came to be known as a knight.

Can knights move backwards in chess?

Yes, a knight can move in any direction whether forward or backward. But if moving the knight, the king behind it gets into check then the knight can’t be moved backward.

No, knights can’t move diagonally unlike bishops. Knight moves in a typical L shape. However, this move can also be interpreted as one square diagonally.

Can a knight move to every square?

Yes, a knight can move to every square. There is also a sequence of moves known as the knight’s tour in which the knight visits all the squares of the board exactly once.

You can check more about the knight’s tour here on Wikipedia.

What happens when a knight reaches the other side?

As per the standard rules, as soon as the pawn reaches the last square you get the chance to replace it with your queen, knight, rook, or bishop and this is known as pawn promotion.

Now you may ask how does the knight take any chess piece, so let’s discuss!

How does the knight kill in chess?

As per the standard rules, you can’t put your own king in check intentionally.

Can a pawn kill knight in chess?

Yes, a pawn can kill a knight in chess but only diagonally, in the forward direction. Remember that a pawn can’t kill any chess piece backward.

Pawn is the only chess piece that can’t be moved in backward direction.

So these were some of the important things you should know related to knight moves in chess.

Hope you now know how exactly the knight moves in chess and how to use it. That’s it! Consider sharing this article with others if you found it helpful.

And if you are looking for nice chess gears to start your chess learning process along with gift ideas for chess lovers then don’t forget to check out my chess recommendations page.