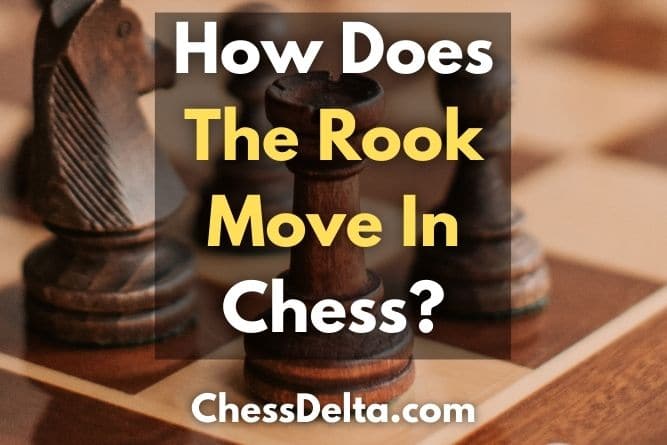 Today we are going to discuss the movement of the rook in chess from start to finish. A rook, which is also sometimes called a castle in chess, is a major chess piece. So, how does the rook move in chess?

A rook moves horizontally or vertically in a straight line up to any number of unoccupied squares. It can also castle with a king, which is a special move of chess. However, a rook can’t jump over other pieces like a knight.

As you can see in the above image, rook can move on every square on the d file (column) as well as on the 5th rank (row) of the chessboard.

However, as you can see the horizontal and vertical squares on which the rook can move must be empty.

If the squares are occupied by its own chess piece then the rook can’t jump over it like a knight.

Read More: How does the knight move in chess?

The rook attacks in the same way as it moves. So if there is an enemy piece on its way that the rook can capture it as long as it is legal to do so.

You can also watch this video by Howcast to get more idea about how does the rook move in chess.

How does the rook move in castling?

Castling is a special move of chess.

It is the only move in chess in which you are allowed to move the two pieces at the same time in a single turn.

Also Read: How does the king move in chess?

So in castling, a king moves two squares either to the left (queenside castling) or the right (kingside castling) and the rook moves just beside the king.

As you can see, in this type of castling the king moves two squares to the left from its starting position and the rook moves just beside the king.

As you can see, in this type of castling the king moves two squares to the right from its starting position and the rook moves just beside the king.

I have already written an in-depth article on kingside and queenside castling. So if interested, you can check that out for further information.

How does the rook kill in chess?

As you can see in the above image, the white rook can kill black pawn that is present on the same rank where the rook is standing (horizontally).

But the white rook can’t capture the black pawn that is present diagonally.

So the rook can just slide along and capture the black pawn that is present in the horizontal direction.

Moreover, note that a rook can capture both in the backward and forward direction in chess. You can check out my article about which chess piece can move backwards, to know more.

No, a rook can’t capture a king because a king can’t be captured in chess. However, the rook can check or checkmate the king. A game of chess ends just before the king is actually captured, at the point of checkmate.

To understand this point properly, first you have to be very clear about term “checkmate”.

So checkmate means the king is in threat of being captured in the opponent’s next move.

When you are checkmated that means your king is attacked by your opponent. You have no ways left to get out of the attack (or the threat of being captured on the opponent’s next move).

And as per the standard rules of chess, the game immediately ends at this point of checkmate.

I have talked more about this in my in-depth article on can a king kill a king in chess which you can check for further information.

Now, there are situations in which you play online and you are not allowed to capture the queen with your rook. So let’s discuss that!

Can a rook capture a queen?

Yes, a rook can capture a queen. However, if your king is already in check then the rook can’t capture any piece until the king is taken out of check.

As per the standard rules,

If the king is in check then the player must first take the king out of check before making any other move.

It is because of this reason only that sometimes, in your online chess games, you are not allowed to capture any of your opponent piece with your rook.

In chess whenever your king is in check then you are forced to first take it out of the check.

And there are three ways of doing that:

It is because capturing the piece giving check is also one of the ways to save the attacked king, right?

So I hope you understood the concept. Now let’s discuss further on how to utilize the rook in chess.

How do you use a rook in chess?

To use the rook, castling can be done to take the rook out of the corner square and make it participate more actively in the game. Also, both the rooks must be attached so that the opponent pieces can’t attack them easily.

To activate the rook and use its full potential it must be brought near the center of the chessboard.

According to the the relative chess pieces value system in chess, a rook is worth 5 points.

In chess, a queen is considered the most powerful chess piece. And queen is worth 9 points.

After queen, in terms of power, the rook is the second most powerful piece in chess. Both queen and rook are major pieces.

But what is the meaning of having such a powerful chess piece by your side if you can’t win the game! Right?

So you must make sure that your all pieces are developed properly.

There are many incidents in which you may lose the game despite having your valuable chess pieces such as the queen and the rook on the board.

I have talked more about this in my in-depth article on piece development. So you can read that for further knowledge.

Also, one thing to note that the rooks should not be brought out too early.

It is because then they might get easily attacked by the less powerful pieces of the opponent such as pawns or knights.

Only after the center pawns, the minor pieces such as knight and bishops are developed, and castling is done, you can think of bringing the rook near the center.

And as I said you not only need to bring your rook out of the corner square but you should also attach it with your rook on the other side.

Doing that both rooks protect each other. So the opponent’s piece can’t easily capture either of your rooks because then the other rook will capture that opponent’s piece.

All these concepts I have covered in more detail in my article on fundamental chess opening principles every chess player should know. So I highly recommend you to check that out!

So I hope you learned everything about how the rook moves and captures in chess. If you found this article helpful then you can thank me by sharing it with others.

And if you want a complete guide that teaches you how to play chess, then I highly recommend you to check out my free step-by-step chess basics series.

That’s it! Thanks and have a nice day! 🙂