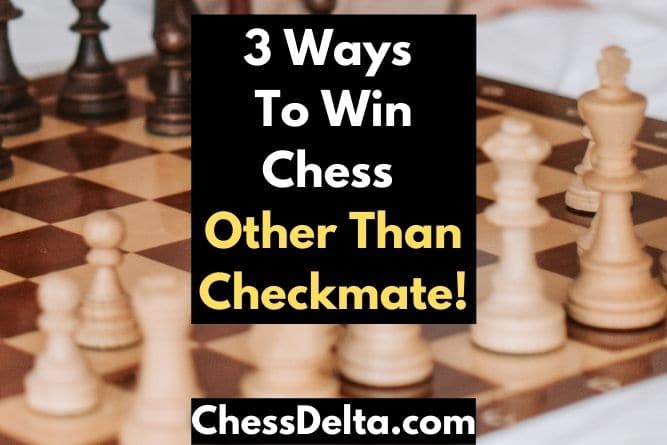 If you are a little bit familiar with chess then you may already know that by checkmating a player wins the game. But is checkmate the only way to win chess?

No, there are three other ways you can win chess apart from checkmate and that is: when the opponent resigns the game, loses on time, or when makes two illegal moves.

Ahead in this article, I’m going to explain all these ways to win a game along with other related questions. So if interested keep reading till the end.

How Is Winning Decided By Checkmate?

Checkmate means when the king is attacked and there are no legal ways to protect it. So the player who checkmates his or her opponent wins the game. While player getting checkmate loses the game.

As soon it occurs the game ends. Remember that check and checkmate are two different things. Check means when the king is attacked but still has the option to protect it.

When a king is in check then there three ways to respond to it:

But checkmate means there is no chance to safeguard the king. I have discussed the difference between these two concepts in my article Can You Checkmate Without Check? (Explained!) which you can check out for further reference.

How Is Winning Decided When A Player Resigns?

Whenever in a game one of the players feel that he/she cannot win the game then they generally resign to accept their defeat.

The side that resigns loses the game while the other side wins the game. Generally, players resign after they lose their valuable chess pieces like the queen.

They also do this to show respect towards their opponent because just think if you are quite sure about your loss then what is the point of extending the game unecessarily.

This not only saves time and energy but also helps the player to prepare for the next games. But all these doesn’t mean that you should resign. There should be a solid reason behind that.

Generally beginners are not so good in evaluating their positions so they resign and after on realize that they could have won or at least drawn the game.

But chess grandmasters are more accurate in evaluating such things. I have written an in-depth article on Why Do Chess Players Resign? (Top 5 Reasons). You can read that to know more about this topic.

How Is Winning Decided When A Player’s Time Runs Out?

If you play casually then you may not know that formal chess games are time-controlled. There is a clock used in such games.

And each player is supposed to press the clock whenever he or she makes any move that too with the same hand used to make the move.

Depending on the type of game there is a certain amount of time allotted to each player to complete his or her game.

Whenever a player is not able to complete his or her game within the allotted time period, loses the game. But if the opponent of that player has insufficient mating material then the game is drawn.

Insufficient mating material means not having enough pieces that can deliver the checkmate. For example, if both you and your opponent have only the king left then the game immediately ends in a draw.

Simply because none of you can checkmate each other. Isn’t it?

Here are some of the other examples of insufficient mating material.

How Is Winning Decided When When A Player Makes An illegal Move?

Here’s a video by Coach Dat that explains what is an illegal move in chess.

An illegal move means any move that goes against the standard laws of chess. In chess, there are certain rules and regulations for each and everything that must follow while playing the game.

FIDE is the international body that manages all the chess competition and all the rules, regulations. There is a handbook of FIDE Laws of Chess in which all the standard chess rules are mentioned.

Now if a player makes any move that goes against this rules then that is considered to be illegal.

As per the standard rule, for the first time if a player makes an illegal move the player doesn’t lose the game. The arbiter (referee) will add two minutes extra time to the opponent’s clock as a form of penalty.

But if the player makes an illegal move for the second time then that player loses the game. However, if the opponent cannot checkmate that player’s king by any series of possible moves then in that case the game is drawn.

Here are some examples of illegal moves:

Thus, if your opponent makes an illegal move two times then also you will win the game provided you have sufficient mating material. Otherwise, the game would end in a draw.

To know more about illegal moves you can also read my article: Illegal Moves In Chess: Everything You Need To Know.

So that’s it! Hope you liked reading this article. If you found this interesting and valuable then please do share with others. If you want to read more then you can also read my following articles:

How Many Ways Can You Win In Chess?

How Do They Decide Who Wins In Chess?

Do You Have To Say Checkmate To Win Chess?

No, it is not necessary to say checkmate to win because the opponent will notice it. If you are playing against a beginner in a casual game then you can do it. But for tournaments and other formal games, it is not required to say anything.

Thanks and good luck for your next chess game! 🙂