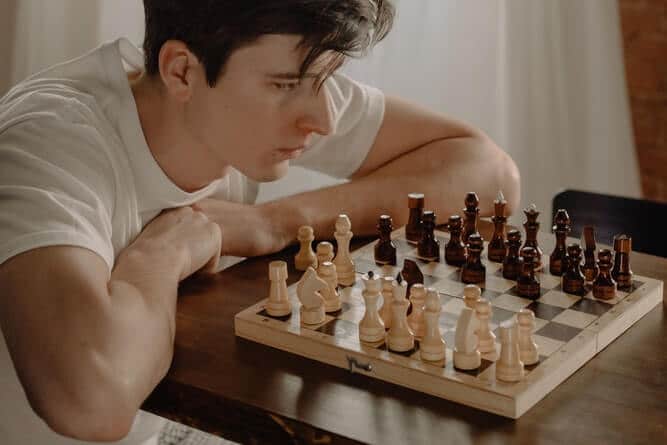 Middlegame is one of the three phases in chess that you need to master to perform well. So when you start learning about the middle game, the very first question that you might think about, when does the middle game start in chess?

As a general rule of thumb, the middlegame starts after the first 10-12 moves which is after the kings are castled, minor pieces like knights and bishops are developed and the rooks are connected to attack on the centre. Although there is no specific time in chess that denotes the start of the middle game.

The transition between the opening and the middle game is very fluid and it is hard to draw the line between them. However in general, to have an idea about middlegame you can consider the above points.

Now further I am gonna discuss with you an example to explain the idea of middle game plus I will discuss why the transition between opening and middlegame is so fluid.

But before that let’s discuss in brief about middlegame.

What Is Middle Game- Brief Overview

Middle game is the phase between the opening and the endgame. All the attack, counterattack and defense happens during this phase.

When you open, the very first target is to develop your pieces and have as much as possible control over the centre of the board. Then you also castle for the safety of your king.

Also See My Article: Why Is Controlling the Centre Important in Chess?

After all your pieces are developed and ready to attack then you can say that it remarks the start of the middle game.

During middle game pieces are exchanged, lines get opened up. You use various tactics to gain advantage over your opponent. You also make strategies to checkmate and ultimately win the game.

The main objective of each player during the middle game is to gain more pieces compared to their opponent and thus have a better position to fight in the endgame.

So middle game is the fully action packed phase of the chess game. This is a brief description about middle game in chess.

Now, let’s look at an example that will demonstrate how to identify when the middlegame starts.

Here is a famous example which is the favourite of many chess players and chess masters, Sicilian Dragon!

Now with this example we both will try to understand the transition between opening and the middle game.

Therefore all the criterias are fulfilled and so we can say that for the white opening has ended and the middle game has started.

Now let’s talk about the black,

Here black has not developed his queens so that the rooks can communicate. Hence as per the criteria, it can be said that black is still in the opening phase and middle game has not started.

Also Read My Article: Should You Trade A Knight For A Bishop (In Depth Guide)

Generally the opening ends within the first 10-12 moves. But in some games where more action is going on during the opening while still pieces are not developed, then the opening can last upto some more moves.

So there is no clear cut time that signifies the end of opening and start of the middlegame.

There are lots of openings with many variations. Hence it is very hard to figure out the exact time when the opening ends and the middle game starts.

However, to have a general idea you can consider that move range.

Note that it is not important to know when the opening ends and the middle game starts. What is important is having a good solid strategy right from the start of the game.

Now I hope that you might have clearly understood what middle game is and when it begins. Plus what is the process to identify it.

One thing I want to mention here that I always tell is, chess is a dynamic game. There are no hard and fast rules.

For a basic idea, you can stick to fundamental and general principles. But everything depends on the actual chess game you play and how you react to the situation.

That’s it! Hope you liked this article. Thanks and have a nice day!