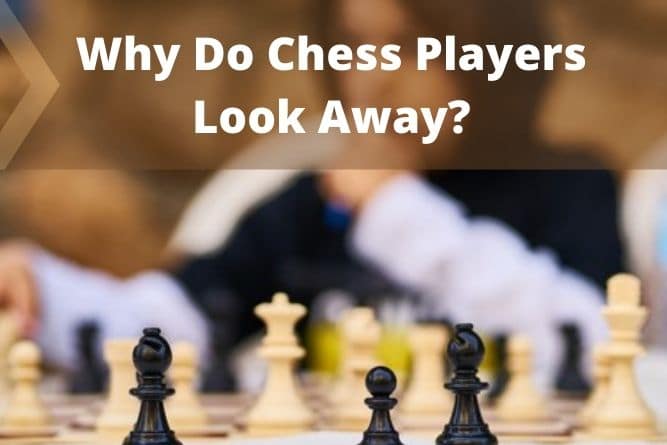 Have you watched chess players playing in a tournament? In that, many times you might have noticed that some chess players look away or look up from the chessboard. This behavior is not just common with beginner or intermediate chess players but even GMs do this.

So, why do chess players look away? Chess players look away mainly because while calculating their moves in their minds, looking away from the chessboard helps in processing their thoughts. Also, they might want to take a brief mental break to erase the retained image of the past chess board positions that causes blunders in the calculation.

Ahead I am going to discuss with you all these in a more detailed way. Reading this article will be definitely worthy for you if you are a serious chess lover. So without further ado let’s start!

Why And How Looking Away Helps Chess Players In Processing Their Thoughts?

While playing chess, many things run inside the chess player’s mind.

Whether they should attack or defense, should they sacrifice a more valuable piece to gain the space advantage or should they wait for some moves, which strategies will work against the particular opponent as per his or her playing style….and many more questions!

So, why do chess players look up? When we are thinking about some crucial issue, you might have noticed that we sometimes look away or look up from the subject. This is the body’s normal reaction to face any problem and find the solution. Chess players also do the same thing.

They look away to gain a sort of isolation. So that they can get out of distraction and think more effectively. This is the normal body language response.

Not all players do these, it depends on person to person.

Every player has some sort of unique personality and behavior.

The Ukrainian Chess Grandmaster, Vassily Ivanchuk, rarely looks at the board when he plays. Instead of that, he stares at the ceiling and the walls.

And obviously, who can forget about American Grandmaster Hikaru Nakamura looking upwards or away from the chessboard.

Here’s a video of a chess game between Hikaru Nakamura and Wesley So by Chessbase India. You can watch this video to see the body language of both the players.

And this behavior might look funny. When a chess player looks away it might seem that they are looking away thinking about non-chess-related issues and they might have lost their concentration.

But then, in a moment they make a move!

So as I said earlier it is quite normal. It is the body’s response to handle the situation and get the solution in the most effective way.

While researching this topic I also read answers where most chess players said they generally look away because that gives them a sort of mental break by changing the scenery. Thus, it helps to focus better on the game.

There are many examples mentioned in the book, Psychology In Chess by Nikolai Krogius that show how chess players made mistake because of retained image.

Even famous chess players like Tal did mistake because of this retained image.

In one of his games with Rossetto, Amsterdam Interzonal 1964, Tal mis assumed a piece to be on its old square.

And on the basis of the wrong retained image he did miscalculations.

Later on, he realized his mistake and the game ended in a draw.

There is much more detailed explanation about the retained image in the section of Retained Image, Chapter – The Chess Image, of the book Psychology In Chess by Nikolai Krogius.

You can read the book to get more ideas on this. (Get it here on Amazon)

To solve the negative effect of the retained image, the author guides us to play blindfold chess or read chess books without the use of a chessboard.

Relation Of Looking Away While Playing Chess With Blindfold Chess.

Moreover, some advanced chess players, like those of Grandmaster level, don’t even need to look at the chess boards. They can play chess blindfolded.

They can, not only play a single game blindfolded but can also play multiple games like that.

As per Wikipedia, chess players Vladimir Kramnik and Viswanathan Anand are strong at blindfold chess.

So that’s it! I hope you understood everything. Please do share with others if you found this article helpful.

And if you are interested to read more articles about chess players then definitely check out my following articles:

Thanks! And Have A Nice Day 🙂