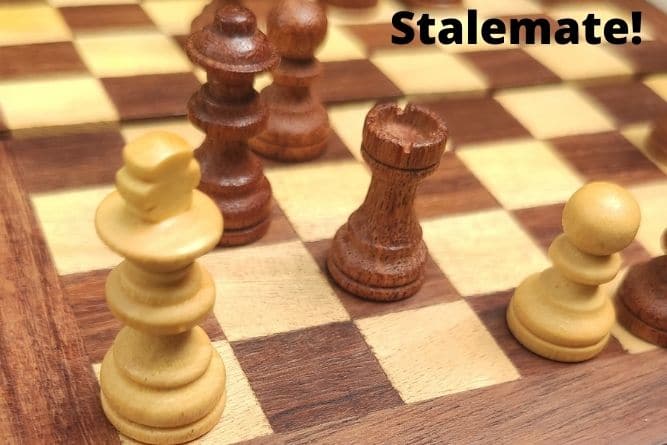 Stalemate is a condition in chess which a winning side hates whereas a losing side loves. Right?

Losing side will always look for ways to end the game in a draw, rather than losing it. And will even try to force a stalemate. If you are unaware of it then there are chances that even for a winning game you may have to satisfy with a draw by stalemate. So, it is very important for you to know the actual reasons why you are getting stalemate.

In short, you keep getting stalemate because you are not giving enough room to the opponent’s king to move. Out of excitement, you may be overlooking and falling in trap of the opponent who deliberately wants to end the game in a stalemate.

Stalemate can occur knowingly as well as unknowingly. If you keep your eyes open then most of the time you will be able to avoid it. For that you need to know those reasons properly. And further in this article I am going to discuss with you all these in detail from start to finish. So if you are interested, then continue reading.

For those who are new to this, it is important to have a basic idea about stalemate.So first, let’s discuss that in brief.

What Is Stalemate In Chess?

In simple words, stalemate is a condition in chess which occurs when your king is not in check and you don’t have any legal moves to make.

Also Read: The Difference Between Stalemate And Checkmate (Explained)

It is a condition in which you are not losing as well as not winning. Thus the game ends in a draw. In tournaments, losing a game, a player gets no points.

But drawing the game helps them to at least gain half the winning points and thus increase their ratings. Hence stalemate is favoured by a player in losing positions.

The player may deliberately try to lose its pieces so that he/she can arrive to a stalemate condition. And if you are going to win a game then it is very important to win it, right? Rather than satisfying with a stalemate.

So now let’s discuss the reasons for getting a stalemate.

Getting Over Excited During Endgame

Endgame phase means when most of the pieces on the board are being exchanged and only a few pieces are left along with the king, fighting with each other to end the game.

Now during this time if you have a lot of material advantage (having more number of chess pieces) compared to your opponent then you might get over excited. And It is quite normal.

Just imagine that your opponent has only a king and two pawns whereas you have two pawns, a rook, a knight, a bishop, a queen as well as a pawn that is going to be promoted.

Won’t you feel super excited? You may think that, Oh! Now I will just kill the opponent’s king! Yuppy! But this excitement sometimes turns into over excitement. And that opens the door to making all the silly mistakes.

You might overlook your opponent’s strategy of forcing the stalemate. You might not notice that your opponent is deliberately losing the pieces one by one. And suddenly you encounter stalemate.

So, the noteworthy point here is, even if you are at advantage over your opponent, don’t get over excited!

As discussed earlier, stalemate occurs when your opponent has no legal moves to make and he/she is not in check.

So, it may happen sometimes that you have attacked your king in such a way that your opponent’s king has no legal squares to move. At this point the game would end straightly in a draw if there are no other pieces to move or the pawns are blocked.

But if the opponent has pawns that can move, then practically the opponent still has legal moves to make. So even if the king gets blocked the game doesn’t end in a stalemate.

Still he/she can move the pawn and continue the game. And in the meantime you can place your pieces strategically to checkmate and end the game.

Therefore, keep note of this point the next time you play chess. But make sure that here I am talking about unnecessarily blocking the pawn. If the opponent’ pawn is going to get promoted then you should definitely block it because it is necessary to do so. Right?

Not Giving Enough Room To The Opponent’s King To Move

One of the most important and main reasons why you keep getting stalemate is may be you are not giving enough space to your opponent’s king to move.

You may be eating all the squares available to the opponent’s king except the square on which it stands. Thus this easily gives rise to a stalemate condition.

This happened in one of the games I played with my little sister. I had more material advantage than her. So I was a bit over confident and thought that I would easily checkmate her.

The position of the chess board was like in the featured image on the top of this page. I was black and my little sister was white. White’s king was on a8 square while black’s queen on c7 square. It was black’s turn to move.

Now, at this point I carelessly moved my rook on b1 to b7 and immediately the game ended into a stalemate. All the white’s pawns were also blocked. Thus white had no legal moves to make and was not in check as well. This is how I committed a mistake.

If I had paid a little attention and anticipated that after moving the rook, I would actually occupy all the space available for white’s king to move so that stalemate will occur, then I could have won the game. Thus you need to remember this point and never repeat the mistake I made.

Another reason why stalemate can occur is if you are promoting your pawn to a queen in a position in which it is more likely to cause a stalemate.

Generally most of the time a pawn is promoted to a queen. But as I discussed in this article there are certain positions in which promoting a pawn to a knight or any other piece like rook or bishop, you can deliver checkmate more easily.

To see the example and to get a more idea you can read the article. (By the way, note that you can’t promote a pawn to a king)

Also Read: Why Would You Promote A Pawn To A Rook? (Reason + Case Study)

How To Stop Getting Stalemate?

To stop getting stalemate frequently you can follow these 5 points.

There is no clear cut way to stop getting stalemate. If you keep your eyes and mind open while playing the game and are aware of the reasons why it can occur then it would be much easier for you to avoid it and win more games.

Now if you are still reading this, then I highly recommend you to also check out my article: How To Avoid Stalemate In Chess? In that I have covered these things in a more detailed way giving you proper examples.

So that’s it! Hope you understood everything well. If you found this article helpful then do share with everyone.

Thanks! And Good Luck!