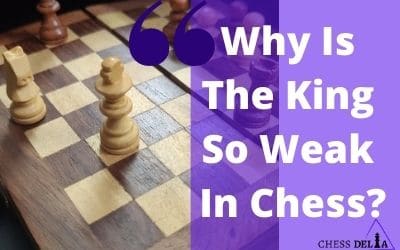 King is the most important chess piece on the board. Losing it means losing the game. So in that sense, its price is infinite. But despite being a priceless chess piece, its mobility is limited. And that makes us think, why is the king so weak in chess?

Although, there is no trusted reasoning available so as to why the king is so weak, logically, if it was given more power, it would be harder to checkmate in chess. The balance in the game would be disturbed and so the game was perhaps designed keeping that in mind.

Having said that, I also want to clear out a misconception. Some chess players think that the king is the weakest chess piece. So they ask, why is the king the weakest piece in chess?

The answer to that question is no, the king is not the weakest chess piece but the pawn is the weakest. The king’s value is generally not calculated because it can’t be exchanged. For exchanging the king, it must be captured which is not possible in chess.

The values of chess pieces are calculated based on their relative strength in the potential exchanges. And as I said, in chess, a king can’t be exchanged.

A game of chess ends just before one step of the king is actually captured, at the point of checkmate.

Also, comparing the king’s mobility with other chess pieces, it is almost equal to a knight.

A king’s value in the endgames can’t be ignored. Moreover, it can do some special things like opposition and castling which other pieces can’t do.

Further, I’m going to discuss all these plus many more interesting things about the king in more detail. So continue reading till the end!

Was the king so weak historically?

As per Wikipedia, chess originated in India.

And after that, it went through many changes. The journey of its evolution is very interesting.

Chess from India went to Persia. From there To Arab and finally entered Europe.

After that many new rules were added to make the game faster and the names of some chess pieces were changed.

During this evolution phase of chess, many rules changed and some new rules were added like en passant. The movement of some chess pieces changed as well.

But the king moved exactly what it moves today. There was no change in its power except the castling move which was added later on.

So that was a bit about the king’s power historically.

Now that we know that the king is weak but does that mean that it is the weakest chess piece in chess. So let’s see!

Is the king weaker than other chess pieces?

In chess, specific points are assigned to each chess piece based on their value when exchanged with the other chess piece.

This system of assigning points is known as chess pieces relative value system.

So as you can see, a pawn is worth one point.

Knight and bishop three points, rook worth five points while the queen is worth nine points.

So losing a knight is equivalent to losing three pawns.

In that way, it gives us an idea while playing chess and especially while trading the chess pieces.

But one thing to note that these points just give us a rough idea.

The actual value of each piece depends on the position of the pieces on the chessboard. However, they are important to just have a basic guideline, right?

Now you might have noticed that I nowhere talked about the king here!

It is because this system calculates the value of chess pieces on the basis of their relative strength when exchanged.

A king is never exchanged nor captured so its value is not assigned.

Instead, losing it means the game is lost. So it is actually priceless.

So considering all these factors it can be said that the king is powerful enough as a knight (sometimes more) and almost equal to a bishop.

#Tip: Do you wonder if a king can kill a queen or not? Then check out my detailed article on the same wherein I discussed everything along with examples.

King’s power during the endgame

Many chess players think that the king is weaker and can’t be used in attacking. But actually the king’s importance increases as the game reaches more closer towards the endgame.

It is the time when most of the chess pieces on the board are exchanged. And now, it becomes easier for the king to roam around and attack the opponent’s chess pieces.

In fact, do you know that many of the checkmates can’t be delivered without the assistance of the king!

Logical reason behind why king is so weak in chess

The game of chess, previously called chaturanga, was made based on the military system of that time, infantry (pawns), cavalry (knights), elephants (bishops), and chariots (rooks), right?

Hence the game of chess is analogous to a battle where the armies are fighting.

Now, in a battle a king is generally headed by its army men and they fight first after that the king comes. But then some will debate that there are battles in which kings play a lead role.

So, actually reasoning about the weakness of the king in chess in this way is incorrect. All these discussions and debates are futile.

Logically speaking, there is no reasoning available so as to why the king’s moves were limited making it weaker but however if you see this from another perspective, the king is weak because that makes the game more interesting to play.

Just imagine how difficult it would be to checkmate a king which had mobility like a queen. The game would be much slower. Right?

Read Related: How does the king move in chess?

Also, whenever we do some changes to the present rule then other things can get affected because of it.

And to compensate for that change, it could have become necessary to change the previously accepted rules of chess.

So basically it would have created a lot of mess and the balance between the chess rules would be disturbed, isn’t it?

So these were some logical reasons that could be given behind why the king is so weak in chess.

Now, I know that you might be thinking about the queen and why it is given so much power. So let’s discuss!

Why is the Queen stronger than the king in chess?

Queen is stronger because it can control more squares than the king. Historically, the Queen (Mantri) was allowed to move only one square diagonally, but later on, the queen’s mobility was increased, making it the most powerful chess piece.

Chess first originated from India (as per Wikipedia). The piece we call today as queen was then called Mantri, which means advisor sitting next to the king.

At that time, the piece could move only one square in diagonal. So you can imagine how weak the queen was!

But after that when chess reached Europe, major changes happened to chess.

As per Wikipedia, the queen gained the power it has today (the combined power of both rook and bishop) during the 15th century.

Read More: Why is the queen so powerful in chess?

In short, there is no exact reason why the king is so weak in chess. However, although the king is weak, it is valuable and logically its weakness is important for maintaining the perfect balance between various rules in chess.

That’s it! Hope you liked reading this article as much as I liked sharing this information with you. Please do share if you find it helpful.

But wait! Before you go I want to ask, Do you struggle to learn chess openings? Then I will highly recommend you to look at my article: 11 (Best) Fundamental Chess Opening Principles For Beginners {Step by Step}

Which is the weakest chess piece?

Pawns are the weakest chess piece simply because they can move only one square and worth only one point in chess.

Which is the most valuable chess piece?

King is most valuable because if the checkmate occurs and the king can’t be moved to a safer position then it means the game is lost.

What is the most powerful piece in chess?

Queen is the most powerful piece in chess because it can control many squares having the characteristic of both the rook and bishop. It is worth nine points in chess.

Does the queen protect the king in chess?

Yes, the queen can protect the king in chess by capturing the piece which attacks the king or even sacrificing herself for the king. But it doesn’t mean that the queen needs to protect the king always because a king can be protected from attack by other chess pieces as well.

What is the most important piece but one of the weakest in chess?

King is the most important piece because the player loses as soon as his or her king is checkmated. However, it is one of the weakest pieces in chess because its mobility is limited as it can move only one square in any direction and two squares in case of castling.