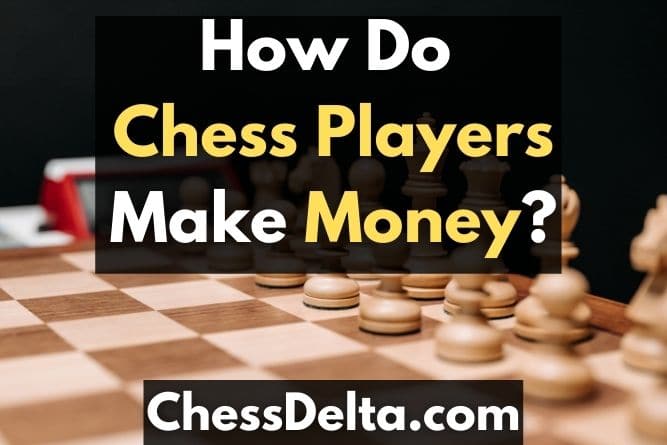 Okay, so you play a lot of chess and you are highly passionate about it. But can you earn money by playing chess? Do chess players make money?

That being said, let’s dive in deeper and see how chess players make money.

The most obvious of this entire list and the activity that most people think about when they think about competitive chess is, of course, winning cash prizes.

Considering the fact that there aren’t always chess championships with large prizes happening, this source of chess-related income isn’t the most reliable and is generally just a nice bonus instead of a GM’s primary income.

This being said, someone who’s just starting out might not find this source of revenue very beneficial but those who have been in the game longer and who have built a reputation among the community can benefit greatly when the opportunity arises.

Watch this video from GMHikaru YouTube Channel on how to earn a living playing chess.

Making appearances is a method that works for top GMs who are paid to attend a certain event. The idea of this is that having that particular GM “show up”, the prestige of the event will be boosted.

The payment involved here can range from being paid cash outright to simply having an all-expenses-paid vacation to the city where the event is being held.

When this is the case, hotels, food, airfare, and expenses are paid by the hosts or sponsors of the event. In most cases, the GM will still be paid a sum, but it will be much smaller than if they were only being paid in cash.

Some chess players earn quite a sizeable income by coaching others. Of course, how much any given chess master makes depends on their level of skill, their ratings and title within the chess community, and how much time they dedicate to coaching.

Both International and FIDE Masters are known to make a decent sum through coaching, but just about anyone who knows their way around chess can use this method to supplement their income.

In many cases, language and geographical location play into how much someone makes this way, too.

For example, coaches offering their services in Europe and the US will be able to sell their services for higher rates than coaches in Africa where there isn’t as high of a demand.

Some GMs charge as little as $10 per hour while others charge upwards of $100+. The best thing about using coaching as a source of income is, as I mentioned, that professionals can choose how much time to put into it, which lets them increase their earnings as they see fit.

Sponsorships are offered to those who have successful brands, whether it be online or in person. Chess professionals who have their own established brands can sometimes add sponsorships to their list of ways to earn cash.

To add this to the repertoire, though, you have to have a certain level of skill and a good reputation.

Once a player has all these things, they might get the chance to be sponsored by a company or brand that’s looking to promote their products or services.

Of course, these sponsorships are paid and the player receives a commission or flat-rate cash payment from it.

Sponsorships can be one-time ordeals or long-term agreements that continue to pay the player long after the original contract has been signed, sealed, and forgotten about.

A good example of how sponsorships work is YouTube, with many creators being paid to mention games, products, and services in their videos.

Sometimes this sponsorship expands into affiliate marketing, which is where a person (or player, in this case) is paid for every time that the sponsoring company earns a new conversion as a result of the player’s recommendation.

Pre-elite GMs can make a large amount of money by playing for clubs. According to an article on chess.com, they’re usually paid anywhere from $5,000 to $20,000 for competing for a certain club.

Clubs can be found all over the world and there are clubs for players of every skill level. This being said, only the best club members are chosen to play for their club in tournaments and various leagues, which is typically when players will start to get paid.

Chess exhibitions are events where a GM plays individual games against more than one person at a time. During these events, participants will pay to compete against a certain GM.

Because this requires a certain amount of popularity, most players who make money this way are titled, well-known individuals.

In addition, GMs entertaining these events need to be on top of their game, which means they need to be able to handle stress and stay focused on multiple games. Participants pay to compete against a good player who isn’t easily beat and if they tire out or lose focus, the success of future exhibitions dwindles.

There are other variations of these events, with one being the exact same but with betting factored in, participants winning money if they win the match. These events have a higher return but also a higher risk since anyone can lose money — even the GMs.

#7. Being A Chess Second

For players with connections to top-tier players, being a second can be an awesome source of revenue. Being a chess second, which is essentially as an assistant.

According to an article on The Hindu, the role of the seconds is to bring out new ideas and work on them in detail such that they can be worthy enough to be used.

The hardest part about this method is knowing the right players to make it possible because, unfortunately, if you don’t know a top-tier player this isn’t an opportunity that will present itself to you.

Some chess players make money by writing books and also as a columnist. You can earn the royalties writing chess books.

In an article on forbes, there is an example of Grandmaster Maurice Ashley, a chess teacher, a commentator, a writer, and an advocate.

There, he said that his pro career was short because he wasn’t good enough. He wasn’t one of the top 20 players in the world.

According to him, lower tier of grandmasters don’t make any money playing the game. So as he said, it was wise for him to move into other things such as coaching and commenting. Organizing his own events, writing books, doing apps.

For bringing all together, as he said, somehow he has cobbled together a living off the the game. And now it is not a bad career for him.

How do chess grandmasters make money?

This is a tough question to answer seeing that GMs can engage in a whole host of chess-related activities to bolster their incomes. They can choose from any of the activities I mentioned above but aren’t limited to those.

Some GMs go as far as to sell chess merchandise, write books and blogs, photograph tournaments, and put in time as arbiters among many other things.

Depending on how many of these activities one partakes in and how serious they are about each, revenue can range from a meager income to something that seems more like an income that one would get from having a part-time job.

Most GMs make $20,000 to $40,000 per year but in most cases not all of this income is chess-related. Many GMs have jobs that contribute to their total monthly income. There are some GMs, though, that don’t need jobs on the side, which goes to prove that chess can be a viable career if enough work is put in.

I have a written a detailed article on How To Become A Chess Grandmaster. In that, I had interviewed FIDE Master Viktor Neustroev. He has coached his daughter, the Chess Champion of Siberia among girls under 9. Quoting directly a portion of his answer to the question, how much do grandmaster chess players actually make:

“Based on my experience, I would say an average GM earns around 3000 $ per month, not more. And when they get a family, have some extra expenses, this is not enough.”

To read the detailed answer I highly recommend you to check out that article here.

So I hope after reading this article, you got the actual picture of how chess players make money.

And if you read the article up till here, then you may have also got some ideas on how you can actually make money and turn your chess passion into an earning source.