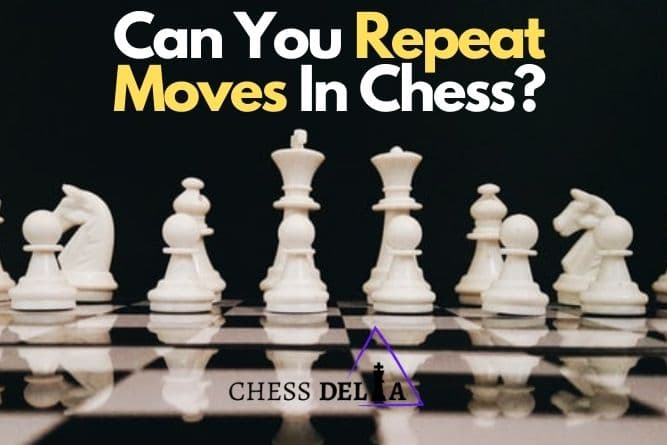 In chess, there is a lot of confusion among the chess players regarding the repetition of moves in chess. Though there are standard rules to clarify your doubts, sometimes it becomes difficult especially if you are a newbie to understand them well. But don’t worry! In this article, I am going to explain everything in a very simple way.

So, can you repeat moves in chess? Yes, you can repeat moves but if the same position is repeated three times then as per the threefold repetition rule, the game can end in a draw provided the player claims for it. However, as per the fivefold repetition rule, if the same position is repeated five times then the game ends in a draw immediately.

There is no requirement of making claim by any of the players regarding the fivefold repetition rule. Now ahead I am going to discuss these two rules along with two other important rules in more detail. So keep reading till the end!

In chess, all the standard rules are followed as given by the FIDE which is the international chess governing body. In the FIDE laws of chess article 9.2.1, there is a description of this rule.

So according to it, a game can end in a draw if the player having the move claims it when the same position is repeated at least three times. (It is not necessary that the repetition has to occur in a row)

As per article 9.2.2, the positions are considered are same only if:

The main purpose of this rule is to prevent any chess player from continuing the game unnecessarily just by repeating the moves.

Here’s a video by ChessBase India of a game played between Wesley So and Baadur Jobava. Watch how threefold repetition occurs and how the chess player Wesley So claims for it!

As per this rule, the player can make a claim for a draw but if forgets then the game doesn’t end automatically. (unless you are playing chess in online platforms where the algorithm is set accordingly)

So what if the player forgets to make the claim, will the game continue forever? Nope! That’s why the fivefold repetition rule was introduced.

As per article 9.6.1, the game is drawn if the same position is repeated at least five times. Rest all conditions are the same as mentioned in the threefold repetition.

But as I said earlier in threefold repetition you would have to claim for a draw. But as per this rule, the arbiter can intervene and declare the game as a draw whenever the rule comes into effect.

In 2018, a chess game was played between Akshat Khamparia and Li Bo. In this game threefold repetition occurred and Li Bo claimed for it twice but since the claim was not correctly made, it was rejected.

Later on, in the game, Li Bo was checkmated. But Li discussed with the arbiter that actually five times the same positions were repeated.

The arbiter checked and found that it was correct. Now as per the fivefold repetition rule the game ends in a draw immediately. So rest all the moves after that were neglected and as a result, the game ended in a draw.

Sometimes the players who are in a losing position also try to constantly give checks in the hope of getting a draw. You can check out my article How Many checks Are Allowed In Chess? in which I have discussed this matter in more detail.

Now there are many other ways a game can end in a draw apart from these two rules. Just imagine that if you were going to repeat the move but then the 50 move rule or the new 75 move rule came into effect. (Don’t know about these rules? No worries! let’s discuss them in brief.)

As per this rule, if no pawn movement and no capture has been made within the last 50 moves then the player can claim the draw.

To claim a draw by this rule the player having the move has to first write this down in his/her scoresheet and declare his/her intention of making the move, that will result in a last 50 move with no pawn movement and no capture or if this has already occurred.

This rule is mentioned in article 9.3 and its sub-clauses. Now just as with the threefold repetition rule, this is not automatic. You have to claim for it. However the extension of this rule, the 75 move rule is a little different.

As per article 9.6.2, the game is drawn if no pawn movement and no capture has been made within the last 75 moves.

However, if the last move resulted in a checkmate then that is given more priority. Now as per this rule the game ends in a draw immediately. The arbiter has the power to declare a draw by this rule.

It is not necessary for a player to claim a draw by this rule. So just like the fivefold repetition rule, this rule is also automatic.

Thus these four rules are very important to know especially if you want to achieve a forced draw by repeating the moves. Now a draw can also occur in other ways like a stalemate. You can check out my in-depth article Difference Between Stalemate And Draw [Simplified] to know more.

So that’s it! Hope you liked reading this article. Please do share if you found this article helpful. Below are some of the related questions that you still might be having so read them to clear your confusion.

Till then, Thanks and Good Luck!

Can You Move Back And Forth in Chess?

Can You Move The Same Piece Twice In Chess?

Yes, you can move the same piece twice but make sure that you don’t repeat the same position at least three times. If that happens then the game can end in a draw.

Can You Move Two Chess Pieces At Once?

Castling is the only way by which you can move two chess pieces at once in chess. There are no other ways of doing this thing.

Why Do Chess Players Repeat The Moves In Chess?