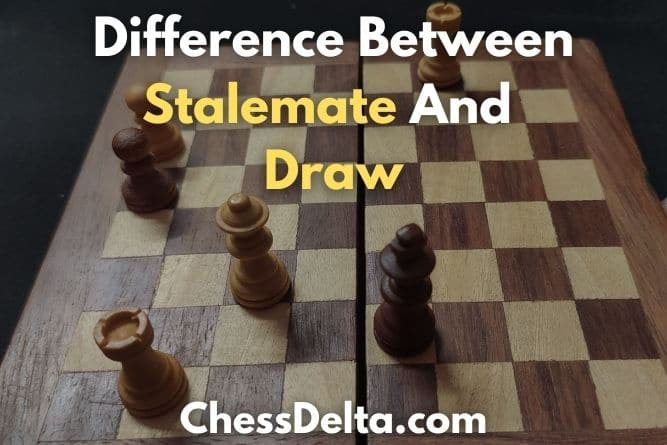 Draw means when neither player can win the game. Whereas stalemate means when the player is not in check but doesn’t have any legal moves to continue the game and so the game ends in a draw in this situation. Stalemate is just one of the several ways in which a chess game can end in a draw.

When a game is drawn, both the players get half of the winning points. Now, a draw can occur in many ways like draw by agreement, threefold repetition, 50 move rule, insufficient mating material and stalemate.

So, further I am going to discuss each of these concepts along with some related questions in detail and in a simplified way so if interested then keep scrolling!

What Is A Stalemate In Chess?

In more simple words, stalemate is a condition that arises when your king is not in check but you don’t have any possible legal moves to make in order to continue the game. Basically, it is a condition in which technically, you can’t lose a game or win a game. So it is considered a draw.

In a chess game, a player wins by checkmating the king, which means by attacking the king in such a way that it can’t save itself from getting killed in the opponent’s next move.

But on the other side in the case of stalemate a king need not to worry because practically it is not in check so there is no fear of getting killed in the next move of the opponent.

To understand this concept more easily, see the below image. White’s bishop and white’s queen, both are attacking the black’s king, right?

Now in this condition the black’s king, although being attacked by two opponent pieces is still not in check. If the black player decides to make any other move then also it has no option because all the pawns are blocked and other pieces are off the board.

So here the black player is not in check but doesn’t have any other legal ways to move its pieces and continue the game. This is the clear condition of a stalemate. Thus the game ends in this situation as a draw.

Read Related: Why Is Stalemate A Draw?

Stalemate is a condition which most of the time occurs unknowingly. But many times it can also happen that a player who is going to lose might try to force stalemate.

In any of the case, it is really embarrassing for a player to be just satisfied with a draw instead of winning the game. If you are already facing this problem and want to know the perfect solution, then here are the two articles that will help you out.

-> Why Do I Keep Getting Stalemate? (Reasons Explained!)

-> How To Avoid Stalemate In Chess? (5 Tips That Actually Work!)

Now let’s see what is a draw and in how many ways in chess you can draw a game.

What Is A Draw In Chess?

In chess a draw means when neither of the two players are able to win the game. So each side has to be satisfied with half of the winning points.

If you lose a game then you get zero points. But if you are able to draw, then you will atleast get half of the winning points and because of this reason only, a losing player will try to end the game in a draw. In chess a draw can occur by multiple ways which we are going to discuss ahead.

Now, all the standard chess rules are followed as given by FIDE. (The international body that governs all the chess competitions and ratings) You might have already heard this word a couple of times.

So there is a handbook of FIDE Laws Of Chess in that all the standard chess rules are mentioned in the form of articles. So ahead while discussing I am going to take the reference of these articles.

Ways In Which A Chess Game Can End In A Draw

In chess sometimes such positions occur in which winning is almost impossible for either side as the position are equal. In that case both players can mutually agree for a draw. So by agreement of the players the game can end in a draw.

Now obviously there is a complete procedure for this that I have explained in detail in this article,

As per the article 9.3, a player can claim a draw if no pawn movement and no capture have been made in the last 50 moves.

The procedure is to record the move in the scoresheet and then tell the arbiter that in the next move 50 move rule will come into play.

One thing you must have noted is that player is required to note down the moves in a scoresheet. Thus whenever any kind of dispute occurs then the written record is used to verify it by the arbiter.

Also Read: 7 Reasons Why Chess Players Write Down Their Moves

So if you have insufficient mating material which means not having enough pieces to checkmate then also the game ends in a draw. Just imagine can you checkmate if both you and your opponent have only kings.

Here are the conditions of draw by insufficient mating material are:

As you can notice in any of these conditions a player doesn’t have enough material to checkmate the opponent’s king. So the game ends in a draw.

As per the article 9.2, If the same position repeats for three times then a player can claim a draw by threefold repetition.

Moreover there is a concept of perpetual check which is a situation in which a player forces a draw by continuously checking the opponent’s king.

Now officially there is no such rule of perpetual check but if you keep giving check constantly then it is quite normal that the same position might occur three times or in the worst case 50 move rule may come into play, right?

Draw-by stalemate occurs when the king is not in check and the player has no legal moves to make. I have already discussed a lot on this topic so there’s no need to talk much.

Also Read: Why Are Chess Pieces Named What They Are? (With Historical Facts)

So that’s it! Hope you liked reading this article and I hope most of your doubts related to stalemate and draw are solved. If you found this article helpful then please do share with others.

If you have some time to read then definitely check out the other articles in this website. I can assure you that after reading them most of your misconceptions will get cleared.

Till then Thanks! And Good Luck!