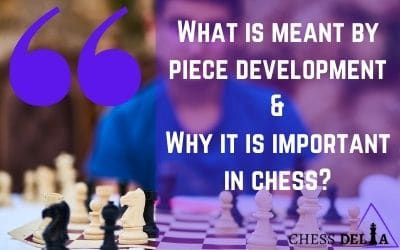 In the opening stage of a chess game, there are three most fundamental things that each chess player does: controlling the center, developing the pieces, and protecting the king.

So now, out of these three today we are going to discuss the second topic that is piece development and why it is so important in chess.

Further we will also discuss the suitable examples to highlight its importance and at the end we’ll talk about the piece development genius of chess (guess the name!)

So continue scrolling till the end! You will definitely get to know something valuable and interesting.

What does it mean to develop a piece in chess?

To develop a piece in chess means to take out a piece from its original square and place it on a more effective square. So that you can get an advantage while fighting with the opponent in chess.

In chess the most common process of developing the pieces is.

This is what the basic chronology of moves that most chess players, especially beginners follow while developing the chess pieces.

However depending on the opening style you play this chronology of developing the pieces differ.

Why is development of pieces so important in chess?

Piece development is important in chess because:

Now, let’s see all these three reasons in detail and understand them. But first have a look at an example which highlights the importance of developing pieces in chess.

It is black’s turn to move. Now before reading further I urge you to have a quick scan of the image and analyse the game, each position by yourself finally guessing the result. After you do that reading further will be very easy

Now coming to the current position black is in check so it will try to save its king by the best possible way, right?

Here black’s king is attacked by two rooks on f6 and e3 and also by the bishop on a2. So it is very hard for its king to defend.

And do you know after several series of moves ultimately white wins the game! ( Not discussing all the remaining moves further because we are learning about developing the pieces so it is better to summarize this game here, right? )

So this was the illustration that showed how important it is to develop the pieces in chess. Now let’s discuss the three points that we talked about earlier.

A space advantage in chess is simply how much portion of the chess board is in your control.

The more space on the board you control the more advantage and chances of winning you have. Right?

If you have developed your pieces well that means you control more space than your opponent. In that way piece development is important to gain space advantage in chess.

As you have seen in the above illustration, white had more space advantage than black (because its pieces were developed. So ultimately due to this extra advantage white won the game.

Now let’s understand what is the time advantage and how it is related with developing a chess piece.

Time advantage means you are ahead compared to your opponent in terms of moves.

When you have time advantage, you don’t have to spend more turns in order to achieve the desirable position because you have already achieved it.(By piece development).

From the above illustration we discussed, you might have noticed that how black’s knight and bishop were waiting to move but couldn’t because white was constantly attacking its king.

So it was important for black to first save its king rather than to develop its undeveloped knight and bishop.

Thus it can be said that black was lagging behind white in one of the most important resources in the chess game that is time.

But white didn’t have to worry much. On the contrary, it was finding ways to deliver checkmate and win the game.

Therefore piece development is important in order to achieve time advantage in chess.

When pieces are not developed they are certainly no value for you in the chess game. Unless you place your pieces at the optimal position you would not be able to utilize their maximum power.

Similarly bishops are useless when blocked by their own pawns. Whereas a bishop placed at the longest diagonal of the board is very powerful.

Again referring to the above illustration that we discussed, black couldn’t utilize the power of its knight and bishop simply because they were not developed properly from the beginning of the game.

And black had to pay the cost of this mistake. While white utilized both of its rooks and bishops in order to attack the black’s king and finally also succeeded doing that.

So it is very clear how when pieces are developed they are more powerful compared to when not developed.

Do you know about Paul Morphy? He was one of the greatest players in chess and probably the first, who appreciated the value of development in chess.

In the early 1800s people used to play chess in only two ways: attack or defense.

But it was Paul Morphy who first showed that development is so important in chess.

He won the chess championship in 1857 and then challenged the top chess players of Europe at that time. Then after winning many games, he returned to the United States and retired from chess.

He was truly a developmental genius in chess!

So that’s it! Hope you liked reading this article as much as I liked sharing this with you. Please do share this article if you find it helpful.

Now let’s have a quick summary of whatever we discussed so far:

Does the first move in chess have to be a pawn?

It is not necessary to move a pawn as the first move. However it is very common in chess to open with a pawn.

What piece should I move first in chess?

You can move the piece as per the opening style you selected and according to your general playing strategy. Generally players first move either centre pawns or knights.

Which pieces are the most numerous at the start of a chess game?

Pawns, knights and bishops are most numerous at the start of the chess game because chess players develop first the pawns and minor pieces (knights and bishops). After the game proceeds then slowly queens and rooks come into action.