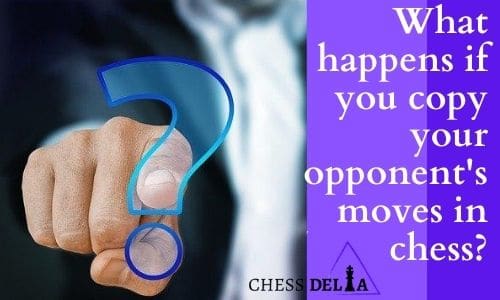 One of my chess friends once asked me, what will happen if we just keep copying (mirroring) the moves of our opponent? I thought it is a very interesting question, so I researched, and here’s what I got. What happens if you copy moves in chess?

If you keep copying every move of your opponent then soon you will be forced to stop and make a different move because you will either get a check or an attack. As per the standard rules, when you are in check you can’t make any move other than getting your king out of check.

Copying the opponent’s moves without thinking properly will show that you are a beginner and within a few moves you will get checkmated. Moreover, you will not be able to stop the first move advantage of white.

There are certain games in which you literally copy some of your opponent’s moves. But that is not wrong because while doing so you follow the opening principles.

However, as you go on to deliberately copying each and every move of your opponent, that’s where all the problem starts!

Why do chess players copy moves?

Chess players especially beginners commonly think that if the opponent is a strong player then copying the moves would be a good idea to play against them. But that seems to be a very bad idea because you can’t copy your opponent all the time.

Now if you copy moves then you will have to suffer from another problem that we are gonna discuss now.

There is a first-move advantage with white which simply means that white is ahead of black by one move because the first move in chess is made by the white, right?

So during the opening, black constantly tries to restore the balance, removing the white’s first move advantage.

But if black copies white’s move then it would be no longer able to restore the equilibrium in the game.

Tip – Ever wondered: Is It Better To Castle Kingside Or Queenside In Chess? Then check out my detailed article on same which will clear all your doubts related to castling.

Ahead we will see a famous illustration in which black falls in a trouble by just copying the moves of white.

Chess copy cat or mirror strategy is a strategy used by chess players to frustrate you so that you make some silly mistakes and take the advantage, to save their time because copying the moves requires negligible time and lastly to hide their original playing strategy from you right from the start.

Let’s say, black knows to play chess well but then also he or she copies the moves. Then he/she might be doing this with the following objectives in the mind:

To frustrate you so that you make a mistake and take advantage of it.

Firstly, just think that you are white and playing in a professional chess game.

If the black is copying your each and every move right from the beginning, you might feel awkward and sometimes a little angry as well.

Why is my opponent copying me! You will definitely react in this way in your mind, right?

So you will make some blunder early on and that is what the black needs. Your opponent (black) will take the advantage of your blunder move and attack you.

So this way it sets a trap for you by simply copying your moves. Therefore it is always advisable to play chess in a cool mind with any anxiety or frustration.

To save time because copying the moves takes very little time.

Secondly black might be copying you in order to save time.

Especially in fast forward games where time matters a lot, the black will try to save time by just copying you! (It takes very little time to copy the chess move, right?)

To hide the playing strategy from you right from the start of the game.

Finally there may be an objective in the copy cat’s mind to hide it’s playing style from the opening phase of the game. Generally if the black doesn’t copy and react normally to your moves.

Then you will be able to easily detect Black’s playing style. But if black is just copying your moves, how are you going to determine his/her strategy?

Why you should never copy your opponent’s moves?

You should never copy your opponent’s moves blindly because you will look foolish and newbie. Also, you can get checkmated very easily and you will not be able to restore the balance in the game by stopping white, having the advantage of the initial move.

All these points we already discussed thoroughly. But now let’s see a very famous example related to this topic.

There was famous chess game played between Capablanca and a unknown chess player in 1918. In this game the opponent of Capablanca was simply copying each of his move. But capablanca punished the copycat opponent hard.

Below as you can see are the movements of the players, see how the moves of Capablanca and his opponent were the same up till the 10th move. The opponent was literally copying Capablanca’s every move.

Note that here Capablanca is white while his opponent is black. (For sake of simplicity, I have have explained each move in the brackets) Left side moves denote white’s after the comma denotes black’s moves)

So after these 10 moves black realizes that he/she is in check. So now the copycat opponent(black) stops copying Capablanca’s moves and tries to save the king. Very funny, right?

How to beat someone in chess who copies your moves?

To beat someone in chess who copies you, firstly develop your pawns and minor pieces, and as soon as you get the opportunity to develop your queen, place it in such a way that you can check your opponent’s king. You can take the assistance of other chess pieces as well.

From the illustration of the Capablanca’s game I discussed above, I think you got some idea and strategy on how to beat someone mirroring your moves and how to set a trap.

The copycat will soon realize his or her mistake of copying the moves and will try to save the king. But will ultimately lose the game.

So this is the simple strategy to beat someone who copies your moves. Here’s a video by GM Huschenbeth in which he discusses a chess problem, white to checkmate in four moves if black copies every move.

Now let’s discuss the next question.

How many times can you make the same moves in chess?

However, the game doesn’t end in a draw automatically by this rule. The player has to claim for it. However, there is a new rule known as the fivefold repetition rule.

As per this rule when the same position is repeated for at least five times then the arbiter can intervene and declare the game as a draw.

You can read more about these rules and other important things in my article Can you repeat Moves In Chess? 4 Must-Know Rules

So now, you might have well understood what things happen when you keep copying your opponent’s moves and why it is a bad idea to do so.

Thus, I highly suggest you stop being a copycat (if you are), and if your opponent copies you, don’t worry because it is very easy to punish them.

That’s it! Hope you enjoyed reading this article. If you find this post useful then please do share. Thanks!

Tip – Do you struggle to understand how to offer a draw? When to offer or accept a draw? Then check out my article which answers all the above questions in detail.

Can you copy moves in chess?

Yes, because there are no rules in chess that say you can’t copy moves. However, it is not a good idea to do so without thinking properly because soon after few moves you will get checkmated.

Is it fair to copy your opponent’s moves in online chess?

There are no rules in over the board or online chess games that say it is unfair to copy your opponent’s moves. However, it is good to avoid copying or mirroring the moves blindly.

What happens if you mirror your opponent in chess?

If you mirror every move of your opponent then at some point you will be forced to stop either due to check or attack. The chance of winning the game will be very less because it will become easy for your opponent to checkmate you.