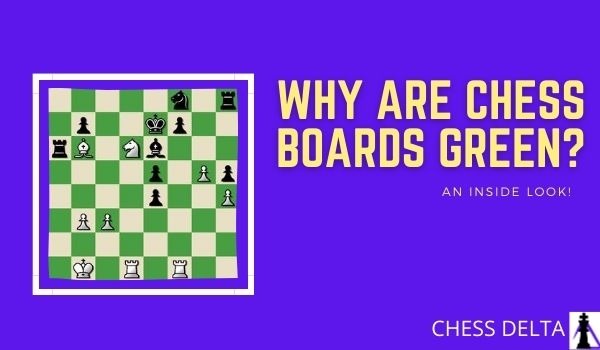 Chess boards are generally in green color along with white because the green and white combination doesn’t cause eye strain. Chess pieces can be easily distinguished in different color squares. The World Chess Federation (FIDE) also recommends the chess boards with sufficient color contrast.

So this was a short answer. Now, let’s discuss in detail why classic black and the white-colored chessboard is not preferred along with proper guidance in the end that will tell you which color chessboard will be best for you plus the history of modern-day chess boards in brief.

So keep reading till the end!

Contrast plays one of the major roles when we talk about eye strain. Now before we take an inside look on how high contrast chess boards are bad for our eyes first of all let us understand what is actually contrast.

The contrast in simple words means the opposite. Thus, contrast color means colors that are directly opposite in the color wheel. More the opposite nature higher will be its contrast.

Want to know how these chess boards affect our eyes! Just get that chessboard and look at it for some time. Then look at the green chessboard. You will yourself realize the difference.

Read Related: Why chess board has 64 squares?

Have you ever noticed while playing with a black and white chessboard, how sometimes chess pieces seem to blend with squares? Especially it is very difficult to distinguish between occupied and unoccupied squares of black chess pieces on black background.

You will not know these problems if you play chess games of a short duration. This problem generally arises in tournaments. In tournaments where chess games are played between 2 to 6 hours, the color of chess boards really matters.

Therefore FIDE also suggests using the color of chessboard and chess pieces with sufficient color contrast such that it is soothing for the eyes. High contrast and shiny colors are avoided as they are not pleasing to the eyes.

Which color chess board should you use?

Considering color as a factor you should choose chess boards that are recommended to be used in tournaments, that doesn’t cause you much eye strain.

In markets, there are different colored chess boards available with various materials and designs. In that case, it is really confusing for you to decide the right chessboard for you.

If price is not great concern for you then you should definitely go for wooden chess sets and chess boards.

I bought my younger sister a mini wooden handy chess board set and she’s very excited about it. You can check that out on my about page.

The chessboard must be rigid. Regarding the material, as per FIDE, chess boards of stone or marble with ‘appropriate’ light and dark colors are allowed. But that is only acceptable in tournaments if verified by the Chess Organizer and Chief Arbiter.

If you want to have a chessboard just for casual use then you can go for any color. But I recommend you choose the chessboard that is soothing to your eyes.

But if you want to play chess tournaments, then you should choose the green or any other colored boards that are mentioned in the concerned tournament rules!

Remember if your thoughts are big about chess playing, then you should practice well. In that case choosing right chess boards and chess sets play a pivotal role.

I suggest you go for a green and white color chessboard. How you do practice and play determines your actual performance in the real tournament. As for exams, we give mock tests similarly you should prepare for your actual chess tournament.

Now, before we end our discussion let’s have a look on the modern chess board history in brief. It will be really interesting to know!

The standard chessboard design that we are using today is known as Staunton. In FIDE competitions it is recommended to use chess boards and pieces of this design. This design has been derived from the name of the great English Chess Player Howard Staunton. It was registered in 1849.

In an article by chess central, the history of chess pieces and chess boards is explained properly. There it is said in the early 19th century, the St. George chess. But after that Staunton chess sets gained popularity.

Hope you liked this article and now you will be able to tell anybody why green chess boards are preferred. Please do share if you find this helpful and feel free to contact me regarding any doubt.

Till then, Thanks! Have a nice day!

Why black and white colored chess boards not preferred?

Black and white-colored chess boards are not preferred because it causes eye strain and moreover it sometimes becomes difficult to differentiate the chess pieces from the square.

Why are chess boards black and white?

Chess games are designed such that two different color shades are used. Therefore chess boards come not only in black and white but also with color combinations.