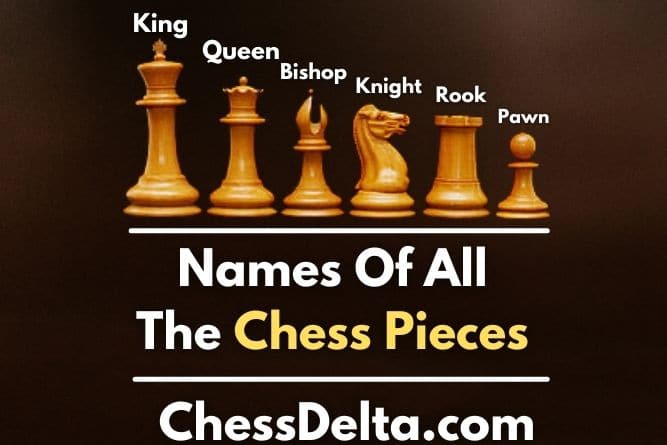 Chess is one of the most popular and oldest board games in the world. When you get interested in chess the very first question that comes to your mind is, what are the names of all the chess pieces?

In a standard game of chess, there are six different types of chess pieces namely king, queen, bishop, knight, rook, and pawn. There are 16 chess pieces on each side including one king, one queen, two bishops, two knights, two rooks, and eight pawns, making a total of 32 chess pieces in all.

The chess pieces are designed in a variety of styles but the Staunton style is considered the standard one.

You can think of chess as the battle between two armies. One player has control of the white army and another controls the back army. Each player has 16 chessmen, so in all there are 32 chessmen.

Since you are here you may be interested to learn about chess from start to finish, right? So I highly recommend you to check out my free how to play chess tutorial for beginners.

Now ahead, I’m going to share with you each of the chess pieces one by one, along with pictures and important facts, how to identify them and how their names evolved throughout history.

I’m very excited to share all this information with you. So let’s start!

And you can check out the best chess sets here (on Amazon).

The king is the most valuable chess piece. It has a crown on its top. You can also read about what do chess pieces look like here.

As per Wikipedia, Chess originated in India by the 7th century AD.

Finally, around the 15th century, it reached Europe, where major changes took place in the names of chess pieces, design, rules, and chess evolved to its current form from there.

The status of the king remained the same right from starting. It was called ‘Rajah’ in India, ‘Shah’ in Persia, and ‘Roi’ in France. All these represented the same monarch status.

Read More: How Does The King Move In Chess?

King is the most valuable chess piece and it can move up to one square in any direction. It can capture any chess piece except another king. You can read more about this in my article can a king take a king in chess.

The ultimate aim in a chess game is to checkmate the opponent’s king. The player who checkmates wins the game while the player whose king gets checkmated loses the game.

Checkmate is a situation in which the king is a threat and there are no legal ways left to take the king out of the threat and hence the game ends immediately whenever it occurs. You can read more about checkmate and checkmate rules here.

Although the king is most valuable chess piece because when your king gets checkmated you lose, but still the king is not the most powerful chess piece. You can read about why the king is so weak in chess here.

Also, the king has one special move known as castling in which it moves along with the rooks in a single move. Castling is the only move in chess in which two pieces move simultaneously.

There are two types of castling, kingside and queenside castling which you can check out here for further reference.

Queen is placed just by the side of the king. The queen chess piece also has a crown but it is little different from that of the king as you can see in the image. It is the second tallest chess piece.

Originally queen was known as ‘Mantri’ in India, which means advisor to the king. When chess spread to Persia the ‘Mantri’ became ‘Firzan’ which means a wise man.

When chess reached Europe the name was not translated. Rather the piece was known as, Lady (the Dama in Spanish) because according to the culture of Europe at that time, it was natural for the king to have a consort.

Later on the lady became the ‘Queen’.

A queen can move horizontally, vertically as well as diagonally up to any number of squares in a single move. It is considered a major piece in chess. You can learn about how the queen moves in chess here.

A queen can take any opponent’s chess piece that comes on its way but only one in a single move.

A bishop is placed just by the side of the king on one side and the side of the queen on another side. Each player has two bishops. There is a cut on a chess bishop which represent the mitre, a tall hat worn by church bishops.

Read More: Why Do Chess Bishops Have A Cut?

At first, the bishop was known as ‘Fil’ or ‘Al-fil’ which means elephant. When chess reached Europe, the piece was called ‘Alfiere’ by Italians which means standard-bearer (, ‘Laufer’ by Germans which means a runner.

There are two bishops in chess on each side. One bishop is placed on a light-colored square whereas the other on dark-colored.

A bishop can only move along the diagonals and capture any piece that comes on its way (but only one in a single move).

Remember, unlike checkers, you can’t take two pieces in chess.

Read More: How Does The Bishop Move In Chess?

The next piece is a knight. The knight is shaped like a horse and is also sometimes called the horse.

Originally a knight was known as a ‘Horse’ in India and Arab. When chess reached Europe there was not so many changes with the horse because Europeans were much familiar with it.

Only what happened is the horse gained the rider and game to be known as the ‘Knight’.

In chess, there are two knights on each side. What makes the knight unique from other pieces is its ability to move in the typical L shape and to jump over other pieces.

You can read more about knight moves in chess here.

A rook is a chess piece that looks like a castle. So you may hear others saying it as a castle but the correct and the standard name of it is ‘Rook’. Calling a rook, a castle is considered informal.

Castle is actually a move in chess in which a king and rook both move simultaneously.

Originally a rook was called ‘Ratha’, a Sanskrit word that means ‘chariot’. When chess reached Persia, it was called ‘Rukh’.

Later when chess reached Europe, it was called ‘Rocco’ which means tower. Afterward, a similar-sounding word that came into existence is ‘Rook’.

In chess, there are two rooks on each side. A rook can move horizontally as well as vertically, backward, and forward up to any number of squares in a single move and capture an enemy piece coming on its way.

Read More: How Does The Rook Move In Chess?

But a rook can’t move diagonally nor it can jump over other pieces like a knight.

Pawn is the first line of defense on each side of the chessboard. They are also known as foot soldiers. There is a total of 8 pawns on each side.

The pawn was called ‘Padati’ in Sanskrit, which means foot soldiers. The Arabic word for pawn, ‘Baidaq’ also means the same.

According to Wikipedia, the word pawn is derived from the French word ‘Paon’ which means foot soldiers. In some other languages, pawn means the farmer.

Pawn is the smallest and the weakest chess piece. It is the only chess piece that can’t move backward.

Although the pawn is the least powerful piece, there are two special moves associated with pawn one is pawn promotion and another is en passant.

You can read more about how the pawn moves here.

That’s it! Hope you enjoyed reading this article. If interested, you can also check out my other articles.