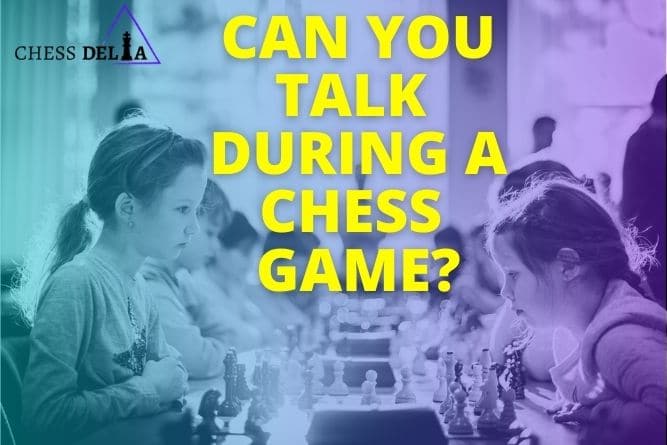 In casual games, no such strict rules and regulations are followed. So you can talk with your opponent as per your wish. But what about a chess match or a chess tournament.

Can you talk during a chess game? Yes, but only when it is relevant. As per the standard rules in chess, a player is not allowed to disturb the opponent by making unreasonable claims, unreasonable draw offers, or any sort of noise.

In chess, as you may already know that FIDE is the international body that governs all the chess competitions. So the standard rules are followed as mentioned in the FIDE Laws of chess. In that, there article 11 is completely about the conduct of players.

So, as per the 5th clause of this article 11, a player is not allowed to distract or annoy the opponent by any means. The player can’t make unreasonable claims, appeals, draw offers, or any kind of noise that would annoy the opponent.

Moreover, as per the 6th clause of this article 11, if a player violates any portion of article 11.1 to 11.6 serious penalties in accordance with article 12.9 shall be imposed on him/her.

As per article 2.9 the arbiter has the following options available for imposing the penalty.

So these were the rules regarding the etiquette of talking during a chess game and the penalties if you violate them. Now let’s see the official rules about when you can talk when you can’t talk, and how you can talk properly without violating any rules.

If you are going to play in a chess match or in a tournament then you should definitely know all these things. So continue reading till the end!

You can talk if you want to make a reasonable claim

Let’s suppose, that you are playing chess and in the game, the threefold repetition occurs. Then you would have to claim for a draw by that rule right? Similarly, if the 50 move rule occurred then also you have to claim. How would you do all these claims without talking!

In case you don’t know, the threefold repetition rule means, if the same position is repeated at least three times then the player with the turn can claim for a draw.

The position is the same if the same player has the turn, the same piece occupies the same squares, plus the castling rights and en passant capture possibility is the same.

Whereas as per the 50 move rule if there is no pawn movement and no capture within the last 50 moves then the player with the turn to move can claim for a draw by these rules.

Moreover, it is necessary to write down your moves in the scoresheet because that will help you to claim the draw. in fact, as per the rules, it is mandatory to do so. To know more about this you can read my article 7 Reasons Why Chess Players Write Down Their Moves.

Since these rules are mentioned in the FIDE laws of chess (under article 9 – the drawn game), claims for a draw by these rules are considered to be a reasonable claim. So if that occurs then you can talk in that case.

Here’s a video by ChessBase India of a chess game played between Baddur Jobova and Wesley So.

In this game as soon as the chess player Wesley So notices the threefold repetition he simply talks about it claiming the draw. Moreover, he also explains that to his opponent. Thus you can talk to your opponent if the claim is relevant and legitimate.

In chess if you want to offer a draw then in that case also you can talk but only if that is reasonable. The procedure to offer a draw as per article 9.1.2.1, The player has to first make his/her move on the chessboard and then offer a draw before pressing the clock.

For offering a draw you can say ‘would you like a draw’ or simply ‘draw’ in a soft voice. You can also offer a draw any other time during the game but make sure that you don’t disturb or annoy your opponent as discussed earlier.

Once you offer a draw then it can’t taken back until the opponent accepts or rejects it. The opponent can reject the offer orally or by touching a piece with the intention to move.

Remember, you can’t scream draw! You can’t repeatedly make unreasonable draw claims. If your opponent gets distracted then he/she can complain about this to the arbiter and in return, you will get a penalty.

Nowadays most players just offer draw by nodding their heads. To know more about how to offer a draw, when you should offer it and when not, you can check out my in-depth article Complete Guide: How To Offer A Draw And Accept in Chess

You can talk if you want to adjust the chess pieces

If some pieces are displaced from their squares then to adjust them place the properly you can do that. But there is a procedure for it.

If you just touch a piece with the intention to adjust them then, as per article 4.2.1, you have to first express your intention by saying “I adjust” or the french word for it “j’adoube”.

If you touch the pieces without saying either of these words then as per the touch move rule in chess you have to move that piece whether you want it or not. To know more about this rule check out my article Why Do Chess Players Touch the Pieces? (Explained)

You can’t do trash talks

See, if you are going to play a chess match then it would be a formal game. So obviously you can’t do trash talks or pass jokes as you could do in casual games for fun.

In tournaments, most of the time many players are playing together so if you talk with your opponent in the playing area unnecessarily then it might distract some other player.

So the best idea is if you want to discuss the game then just come off the playing area and do so. Moreover, I have also seen many many chess players asking about saying check in the game.

If you have the habit of playing casual games with beginner chess players then you might have developed the habit of saying check, right?

But actually in tournament games it is not necessary to say check or checkmate. Most of the time opponent will identify that.

In fact, saying check or checkmate may sound a little bit insulting and may annoy the players as well. So you should rather avoid saying this in the game. I have written an in detail article regarding this topic to get the further reference.

So that’s it! I hope I was able to clear all your doubts. Please do share if you found this article helpful. Thanks : ) and Best Of Luck for your next game!