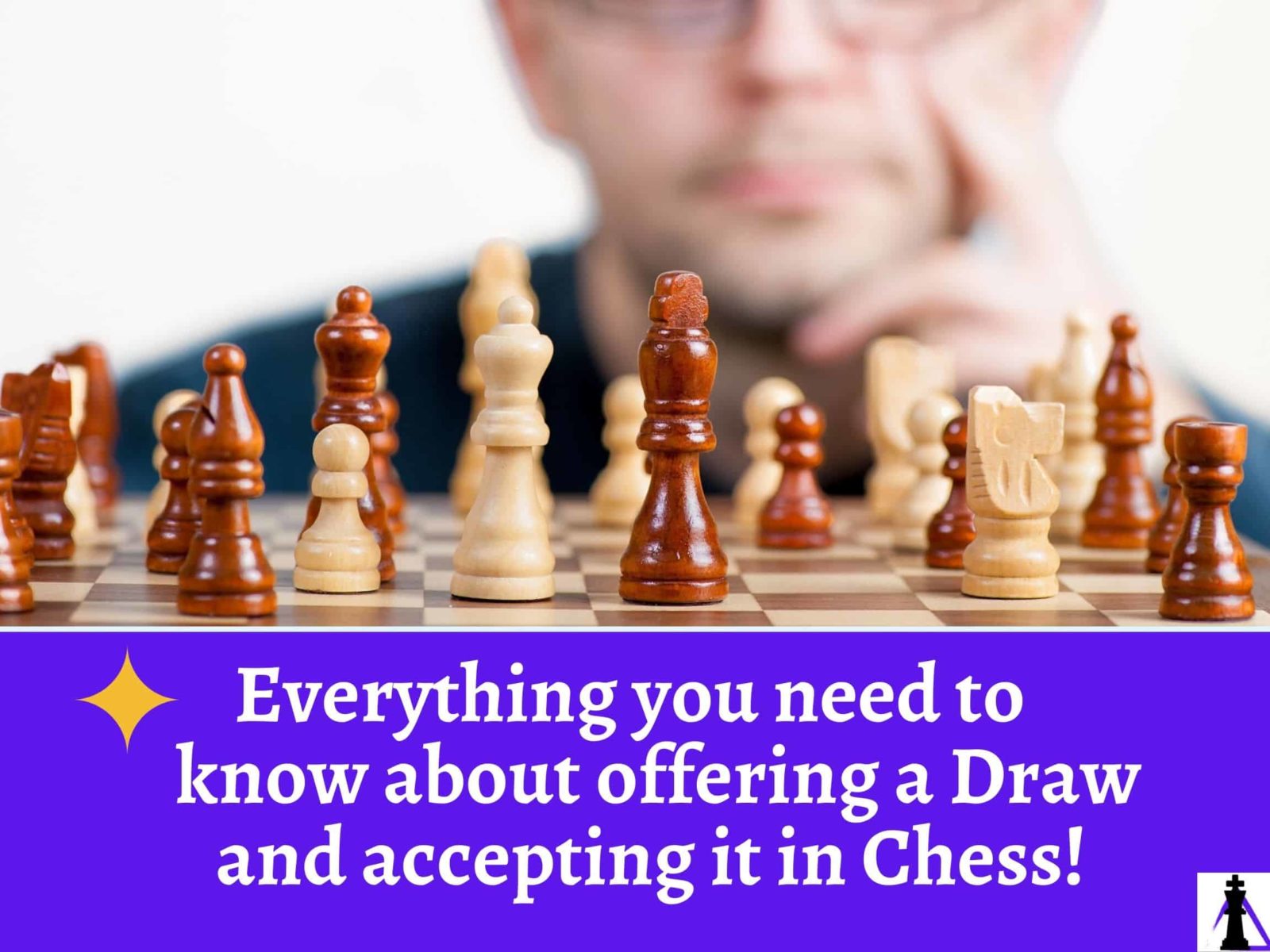 In chess, many times situations come when offering a draw in chess is the only better way round but due to lack of proper knowledge about the exact procedure you are confused and hesitate in doing so. Right? But don’t worry! You are at the right place!

How to offer a draw in chess?

As per the standard rules of chess, a player has to first make the move and then offer a draw by saying ‘I offer a draw’ or simply ‘Draw’, before pressing the clock. After that, the player must note this down in the scoresheet with the symbol (=) behind the move.

Ahead I am going to discuss with you everything about offering a draw, accepting a draw, and declining a draw (without violating any rules). This post will really help to clear all your confusion. Keep reading till the end!

So when you encounter a position in which you feel that offering the draw is the best idea then just make your move. After that as I said earlier offer the draw but before pressing the clock. You can just utter in a soft voice “DRAW” and that will be enough.

And then note this down in the scoresheet by writing an = sign after the move. Writing down the moves in the scoresheet helps to solve future disputes between you and your opponent. You can read my article Why Do Chess Players Write Down Their Moves? (Top 7 Reasons).

Note that as per the rules, once you offer a draw it can’t be taken back. Moreover, you can’t force your opponent to accept your draw offer. After you offer a draw it remains active until the opponent rejects it orally or by touching the piece with the intention to move.

Remember that you can’t distract or annoy your opponent by making constant unreasonable draw offers. It is strictly forbidden to do so as per the FIDE article 11.5.

Here’s a video by GM Huschenbeth, in which grandmaster Huschenbeth explains in a very nice way how to offer a draw and also decline it in chess.

When should you offer a draw in chess?

You should offer a draw when there is very less probability of winning when you are fatigued too much and offering a draw will help you to prepare for the next game. But it is generally bad to offer a draw to a higher rated chess player than you.

IM Silman describes how it is inappropriate to offer a draw to a player rating higher than you. It is fairly good to accept a draw from grandmaster or any player having ratings higher than you but if you offer them a draw then it would be generally considered as an insult.

Another point you should note is don’t offer a draw in the games where, if you would have tried there was a possibility of winning. Take the example of Grandmaster Magnus Carlsen.

I have read his interviews where he says he loves every second of the chess game and never likes to settle for a draw. He always seeks to win the game. Probably that winning spirit is only what has made him such a big chess player.

I have seen many games where the game ends early. I feel that it is just a loss to both players because you could always gain a lot of experience even if you lose completing the game rather than just settling for a draw. I think that you might have also seen this. This case mostly happens when players are not that mature.

Even if you lose, you will notice your mistake and get to know where you have to work to improve yourself. This way you will notice more improvement in your ability to play and eventually in your rating as well.

To see how the chess players offer, accept, and decline a draw in a real chess game. Then you can watch this video by ChessBase India of a game played between two grandmasters Vidit Gujrathi and Vladislav Artemiev. In this game, the three times draw offer was made. You can watch these videos at the timings mentioned below.

So far we discussed how and when to offer a draw. If you want to know, why do chess players offer draws then you can also check out my article.

Now let’s see how to accept and decline a draw. Plus in the end some related questions.

How to accept a draw in chess?

To accept a draw you have to just shake hands with your opponent and that’s it.

Whenever your opponents extend their hands to make a draw offer you can just do a handshake maintaining eye contact. This way you will look polite as well. (If you have watched the above video you might have noticed this thing.

Actually accepting the draw is easy but you should know what is the right time to accept it. So let’s discuss that.

When should you accept a draw in chess?

Generally when you are not much confident of winning the game and in addition to that if your opponent is a higher rated player than you, then in these cases you should accept a draw.

Sharing one of my own experiences. Once I was playing online, the opponent offered me a draw but I neglected and felt that I was in a better position (a bit overconfident) but to the contrary, I lost the game in the end. I think the same thing can happen to you as well.

So the key takeaway from this incident is:

Whenever you get an offer of a draw in chess, evaluate your current position and visualize all the possible outcomes and then only decide whether to accept it or decline it!

Also Read: Stalemate Vs Draw In Chess (+How Many Ways A Game Can End In A Draw)

How to decline a draw in chess?

To decline a draw you can either say it orally or just touch the piece with intention to move.

Generally if you want to reject the opponent’s draw offer then you can just keep playing. But if you want you can also decline the draw offer by saying something like, ‘I would like to play’.

When should you decline a draw in chess?

If in the game there is even the slightest chance of your winning. You strongly feel that your opponent will go wrong somewhere then in that case you should decline a draw.

You may also like to check out my article 5 Reasons Why Chess Players Resign (With Video).

I hope you enjoyed reading this article as much as I enjoyed sharing this with you. In case you missed out here is a quick recap of everything discussed above:

So in conclusion it can be said that the best idea is to keep your mind open, evaluate all the possible outcomes, and then make a decision. This is probably the best way to deal with draw offers in chess.

How does a draw affect my rating?

Why do chess players draw?

They draw because they are in a situation where the winning possibility of either side is very less and drawing the game is only the best option. Apart from this if any situations like threefold repetition, fifty move rule, or a stalemate are there.

When can you offer a draw in chess?

As per the standard rules, a draw offer can be made any time during the game as long as it doesn’t disturb the opponent. But generally chess players, after making their move offer the draw and then press the clock.

When can you accept a draw in chess?

When a draw offer is made you have to accept it before you make your move. Once you touch a piece with the intention to move, it gets rejected automatically.

Why would you offer a draw in chess?

Because I might get stuck or the other scenarios like fifty moves, threefold repetition, stalemate might have occurred and even when I’m very tired playing long tournaments.

What happens when you offer a draw in chess?

When you offer a draw and your opponent accepts it then the game will end in a draw. Thus you will get 1/2 points. But if the opponent rejects your draw offer then you have to continue the game.

How do you force a draw in chess?

To force a draw you can either repeat the same position three times so that the threefold repetition rule can be applied. You can also create a situation where either the fifty move rule or stalemate can come into effect.