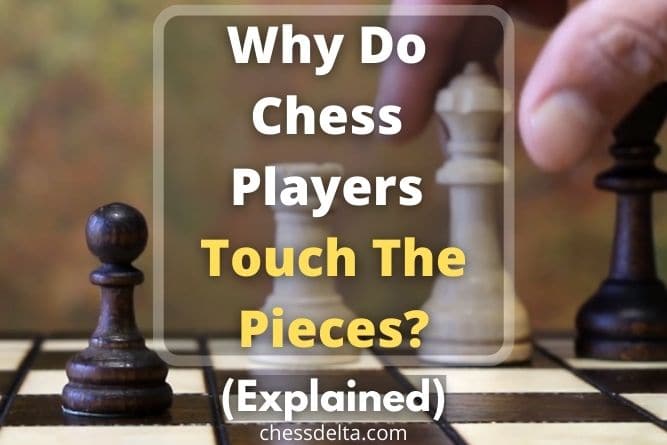 You might have seen in many formal chess games that as soon as a player sits on the chair the first thing they do is touch the pieces. As a spectator, it may come to your mind why they touch the pieces.

Chess players touch the pieces to adjust them and make sure that they are in their correct position. Touching the pieces makes them relax and helps to focus more on the game. As per the standard rules, before adjusting the pieces the player has to say “j’adoube” or “I adjust”.

Also, it is important to note that a player must adjust the piece only when they have the move. Simply because it might cause distractions when a player adjusts the pieces in their opponent’s turn.

Generally, chess players develop this act of touching the pieces as a habit and do this whenever they start a game. Some chess players like to position their pieces such as knights to face in a certain direction. For example, some prefer to position the knight facing inwards while some, sideways.

Here’s a video by Chess – ThanhCong Online in which you can see how one of the famous chess players Garry Kasparov as soon as sits on the chair starts touching the pieces one by one.

One thing to note is that during the game if a player touches a piece (other than the purpose of adjusting it) then he/she must move that piece or capture if it is legal to do so. This is actually called the touch-move rule.

Ahead I am going to explain to you this in detail and also the touch-move blunders that many famous chess players did, so if interested, keep reading!

What Is The Touch-Move Rule In Chess?

As per the touch-move rule if a player having the move, touches a piece with the intention to move, then he or she must move that piece and if it is an opponent’s piece then that has to be captured if it is legal to do so.

So, if you touch a piece then you have to move it. But if you just want to adjust the pieces then before touching, you must express this intention by saying “j’adoube” (a french word for I adjust. Pronunciation is “ʒadub“) or “I adjust”.

A player is not allowed to touch the pieces when it is the opponent’s turn. As per Wikipedia, although the word j’adoube is the term accepted worldwide, a locally accepted word for adjusting can also be used.

The touch-move rule is followed in all professional chess games. In the FIDE laws of chess, article 4 there are proper guidelines given about the act of moving the pieces.

Key Points Of The Touch-Move Rule

Read Related: Can You Take Back (Undo) A Move In Chess? (Explained)

After the game ended he complained to FIDE about this violation but FIDE cancelled his appeal with respect to the above rule that if a player touches the piece and continues the game then he/she loses the right to claim for opponent’s violation of touch-move rule.

Also Read: Why Do Chess Players Write Down Their Moves? (7 Reasons)

Why Are There So Strict Rules For Touching The Pieces?

The rules of touching the pieces are strict to avoid major disputes and maintain professionalism in the game.

Just imagine if it there was no such touch move rule in chess, then your opponent would touch a piece for one minute, think about it the next and again keeping it back. Touching some another piece and making the move.

First of all this would be very much distracting for you. Isn’t It? Secondly it would consume a lot of time and the game would look quite amatuer.

Moreover, in many cases, several disputes may occur and to avoid them it is very necessary to have certain standard rules and regulations. Hence the touch move rule exists.

Also Read: Why Do Chess Players Put The Kings In The Middle? (Explained)

There was a game played between famous chess player Judit Polgar and Garry Kasparov. Garry made a move and seemed to take his hand away from the piece for a split second and made another move. Judit Polgar was shocked seeing this but didn’t say anything and continued the game.

After the game ended she said about this but Garry denied. Later the game was checked in the video and it was found that Garry Kasparov in fact let go of the piece.

Another incident occured in a game played between Magnus Carlsen and Boris Savchenko. In this game Magnus moved the king but then realized it was a bad move so again changed the position of the king.

Now, according to the touch move rule once you stop holding the piece you can’t move it again. It is considered an illegal move.

Here is a video by Chess Studio in which you can see this touch move blunder by Magnus Carlsen.

So I hope now you know why chess players touch the pieces. You may also like to read my following articles:

Can You Touch A Piece Without Moving It?

Yes, a player can touch a piece without moving it but only for the purpose of adjusting. The player must declare this intention by saying words like “j’adoube” or “I adjust” before touching the piece. As per the touch move rule, once a player touches a piece with the intention to move, then he or she must make that move.

Can You Adjust The Pieces Of Your Opponent?

What Happens When A Player Touches An Immovable Piece?

As per the standard rules, a player can make any other legal move if the piece touched is immovable. However, if the player moves the immovable piece, then it would be considered an illegal move. After two illegal moves, the player loses the game.

So that’s it! Hope you liked reading this article. If you found it helpful then do consider sharing this with others. Thanks and Good Luck!

Wait! 🙂 Are you a beginner and looking for some good chess sets? Then don’t forget to check out My Recommendations On The Top 7 Best Chess Sets For Beginners.