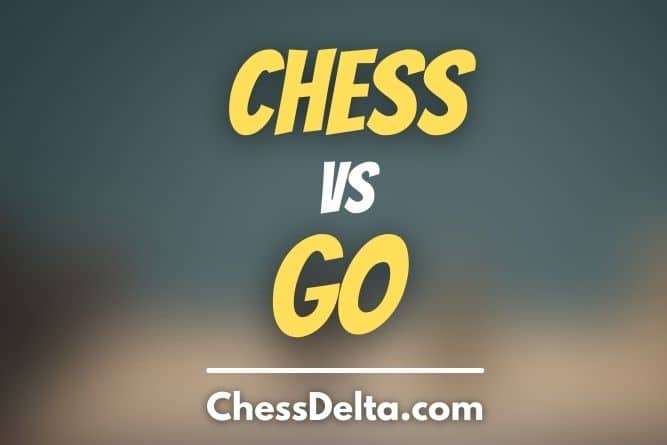 Difference Between Chess And Go

Chess is more popular in the west than Go. In North America and the UK you will more likely hear about Chess more than Go, however, Go is more popular internationally. It’s harder to find someone in the far eastern countries who know of Chess as a game over Go.

Chess has become more popular in the west due to its use in the media. There are movies, television shows, and even musicals that include the game in some form. Go is mainly shown in East Asian media where the game would be more familiar to the demographic the media is shown to. Chess is more “mainstream” as it were.

Chess Vs Go: Which Is Harder?

Go is a more complex game but Chess is still the harder game to play. Chess has fewer pieces all with their own roles (king, queen, rook, bishop, knight, pawn). Those roles need to be learned and understood in order to play at all.

Once you learn all of the pieces and their roles in the game, the strategies with each role are specific to each piece. All of the pieces could protect one another and defend against attacks. In Chess, all the pieces can move in certain amounts and directions depending on the piece.

In Go, all you do is place a stone, and that’s your move. The complexity is the strategy you take to place your stones in positions that will build your side of the board that you’re trying to occupy. The stones do not move once they are placed, all you can do is add more stones.

Go also implements a handicap system that is not in place in Chess. Go is more forgiving to weaker players with this handicap because it equals the playing field. This makes it easier for weaker players to learn the game without being overcome by stronger players.

Chess is harder in this regard because it is less forgiving on weaker players. They are unmatched unfairly if they play against stronger players. In these cases, it is more effective to play against players of your strength level.

Why Is Go Harder Than Chess For Computers?

Go is harder for computers to play than Chess because there is a vast amount of possible moves, way more than in Chess. When you begin a game of Chess, there are upwards of 20 possible moves while Go begins with over 362.

The method used in AI when using a computer to beat the best Chess player in the world, Garry Kasparov, in 1996 was brute-force AI. This is when the computer program would map out a series of possible game states in a decision tree, so with Go, there are simply too many possible game states to sift through.

Also Read: How Many Chess Games Are Possible?

When Go players are asked how they decided on a move, most will probably say that it just felt right in the moment. That is a sentiment that a computer will have trouble emulating, therefore they had to develop a computer AI that could predict the next human move about 57% of the time.

Is Chess Or Go Better For Your Brain?

Chess exercises the brain differently than Go because it uses more problem-solving strategies, therefore making Chess better for your brain. Brain scans of Chess and Go players revealed that Go players and Chess players use different sides of the brain. Go uses the right while Chess uses the left.

Both games stimulate the brain in different ways, but neither has much to do with intelligence. However, Chess has been known to raise your IQ. This proves that playing chess can stimulate your brain enough for it to become more attentive to things in normal life as well as in activities.

Is Go Older Than Chess?

Yes, Go is one of the oldest games in the modern world and is more than 4,000 years old. Go is believed to have been invented in Ancient China, though its exact origins are not fully known. Over the years and centuries, it spread to Korea and Japan going by different names in each country. The name of the game, “Go” comes from Japan.

It is believed to have been developed by Emperor Yao to help enlighten his son to the practice of concentration, balance, and discipline. This is according to legend and not an exact historical fact.

It began to rise in popularity around Japan along with the class of the samurai in the Heian period of 794–1185. The modern iteration of Go that we know today ramed up when it was given special status and schools were opened for the public to learn more about this popular game.

Chess is significantly younger. It was invented in India, but it’s also believed by some to come from China as well (again unknown). In India, It was developed in the Gupta Empire of the 6th century.

The earliest form of the game from India had the name chaturanga and had the four divisions of the military of that time: cavalry, infantry, chariotry, and elephantry. These became the rook, knight, pawn, and bishop as we know them today.

Both of these games eventually made their way around the world and shaped board gaming culture into what it is today. Professional chess and Go tournaments, as well as humans programming, AI to beat their best players.

Chess and Go are vastly different games but they are also very similar in many ways. In regards to their rules, setup, and strategy, they couldn’t be more different. Chess has two colors on a board just as Go does but the pieces have roles and certain distances they can travel while Go has stationary stones that once placed cannot be moved again.

Go uses the human instinct for making the next move while Chess uses problem-solving to decide. This means that Chess is better for your brain by flexing its muscles to keep developing new ways of problem-solving etc.

Chess and Go have something in common with their origins; not everyone is sure exactly where the two games come from, but there is some evidence that Go originated in China and Chess in India, but it might also have come from China as well.

Go is the older game with Chess being developed much later in history. Both found their way to become popular in their respective regions as well as around the world.