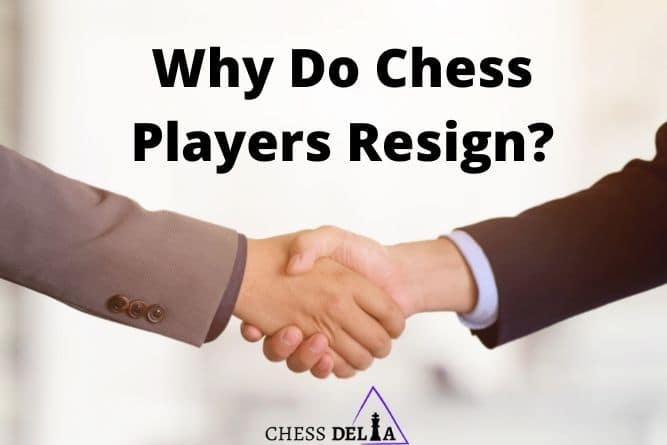 Many times you might have seen chess players resigning their game. Not just beginners but even grandmasters resign their game.

But ever wondered why do they do it? If curious to know the answer to this question then you are right place.

#1. To accept their defeat

Yes, obviously the very first reason why many chess players resign is they want to acknowledge the fact that they will lose the game.

They realize that they can’t win and even end the game into a forced draw like a stalemate. You can read my article Stalemate Vs Checkmate: Helpful Guide For Beginners! for further reference.

In some games, it may happen that you are in a shortage of time compared to your opponent. If you had more time then you could have checkmated your opponent.

But having less time in your clock it might seem almost impossible to win the game. Thus in this case chess players accept their defeat.

By material I mean the value of pieces you have on the board. In chess, there is a point system as per which each piece is allotted some points. A pawn is given 1 point, knight 3 points, bishop 3 points, rook 5 points while queen, the most powerful piece is given 9 points. (King is not considered because the king is priceless!)

Now according to this point system, you can calculate the value of the piece you have on the board in a given time. If you have a higher value of pieces than your opponent then it means you have a material advantage and vice versa.

Although you can’t strictly play your games based on this point system it gives you a general idea. It helps you to analyse and evaluate the position of the board at any given time.

Most often chess players resign when they lose a higher value chess piece like their queen. Or if they are not able to prevent their opponent from promoting their pawns into a queen. Because winning almost seems impossible for them from that point.

So you can imagine the strength of a queen in chess. You can read my article Why Is The Queen So Powerful In Chess? (Explained) for further reference.

#2. To show respect towards the opponent

Chess is a game in which sportsmanship spirit is given a lot of importance. Before chess players start a game they shake hands. While playing none of the players make fun of each other and politely keep playing.

Moreover, as per the standard rules, it is forbidden for a player to disturb his/her opponent by making any noise. You can read my article Can You Talk During A Chess Game? to know more.

Now, I am saying all these to you to highlight the importance of politeness in the game of chess. If a game is in a lost position (provided you are certain about it) and you just keep playing then just imagine how annoying it would be for your opponent.

It is generally considered an insult if you are playing against an experienced player and you keep playing in a position in which you very well know that you are going to lose.

So to show respect many chess players resign and accept their defeat. Even grandmasters do this in their game.

Here’s a video by ChessBase India of a game played between Magnus Carlsen and Vladislav Artemiev. Both these players are grandmasters.

As you may have seen in the video GM Vladislav Artemiev is losing on the clock as well as on the board So he decides to accept his defeat. You may have noticed how politely and respectfully he resigned from the game.

He first stopped his clock, then made eye contact with his opponent (GM Magnus Carlsen) nodding his head, and then did a handshake with his opponent. If you had watched the video till the end then you might have also noticed that both the players kept their king on the middle square.

Do you know why? then check out my article Why Do Chess Players Put The Kings In The Middle? (After the Game Ends).

#3. To not waste time and effort

Continuing a game which you very well know that you are going to lose is both a waste of time and energy isn’t it?

Most beginners cause blunders and then they think that they are not going to win so they resign soon. But it is not a good habit.

They can’t identify the position very well. What if instead of losing, they could have ended the game into a forced stalemate. They could have at least gain half the winning points, right?

You can also read my article How To Avoid Stalemate In Chess? (5 Practical Tips)

#4. To prepare for the next game

Generally, if you are playing in a chess tournament then you have to play a lot of games. Sometimes even multiple games in a day.

Moreover, the games get so long that you may feel tired. So in that case, continuing a game in a lost position isn’t worth the time and effort. Isn’t it?

Chess players rather prefer to resign the games which they might think would ultimately end in a position in which they would lose. By doing this they get some time to relax and prepare themselves mentally for the next game.

Also, read my article Why Do Chess Players Look Away? (With Facts)

#5. To enter lower-rated games by sandbagging

Do you know about sandbagging? It means hiding your strength deliberately. So when a player loses the game on purpose to enter lower-rated games in a tournament just to get the prize money it is known as sandbagging.

A player who practices this thing is known as a sandbagger. What happens is in chess, each player is given some rating by the international chess governing body, FIDE. These ratings represent the strength of each player.

Now in tournaments players having similar strengths play against each other. This is a normal thing that is followed in all other kinds of games. But if a player with higher capability purposely plays against a player with less capability just for monetary gain then this is quite unethical. Isn’t it?

This is not just seen in offline but also in online chess. The sandbaggers generally lose their queen or make any move just to show that they are going to lose their game naturally and then resign.

And as they resign their rating decreases due to which now they become eligible to play in lower-rated sections of a tournament.

Sandbagging is seen in tournaments in which huge prize money is involved. This way of playing chess is against the standard rules. Several steps have been taken to eradicate this issue.

Read Related: How To Resign In Chess? (With Etiquette!)

Chess players resign to accept their defeat and to respect their opponent instead of playing unnecessarily. They don’t want to waste their time and energy. Moreover, if they are playing in a tournament then they resign to prepare for the next game while some resign for sandbagging.

So that’s it! Hope you liked enjoyed reading this article and I hope I was able to answer all your questions. Thanks!

Why do grandmasters resign?

They identify that they are going to lose the game so they accept their defeat by resigning. They do is to respect their opponent and to avoid wasting the time and energy for continuing the game even in a lost position.

Why do chess players resign after losing their queen?

Queen is a very powerful chess piece. When a player loses the queen (provided already lacking in the material) then it becomes very hard for that player to checkmate the opponent. So in some conditions like this, chess players resign.

How do you give up in chess?

To give up (resign) in chess you can first stop your clock and then say resign and then shake hands. Nowadays after stopping the clock, grandmasters nod their heads making eye contact with their opponent, and then do a handshake to resign.

Why do chess players offer draw?

Generally, chess players offer draws when they are in a position when they feel neither side can win. Apart from this they may be bored or tired and don’t want to continue the game. You can read more about this in my article 3 Actual Reasons Why Chess Players Offer Draws.