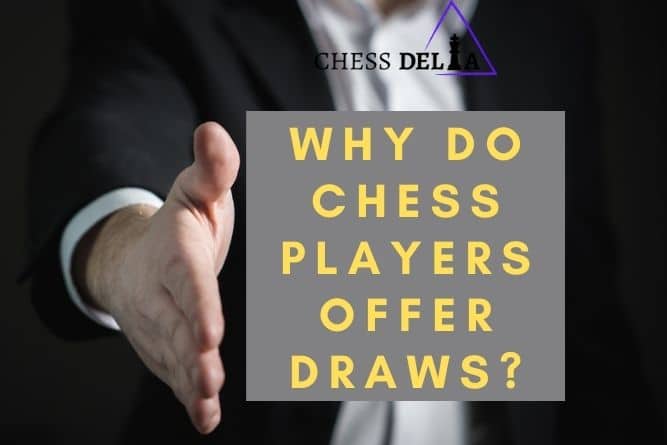 You might have seen the professional chess players asking for a draw or offering a draw. But do you know why they offer it?

A chess game is drawn if a player’s king can’t be checkmated by any series of legal moves. Whenever chess players anticipate such positions, they offer a draw. Also, they might offer a draw if they are tired.

Ahead, in this article, I’m going to explain to you why do chess players offer draw in more detail.

You can also watch this video by me or else continue reading!

If you are new to chess then you might think why do chess players draw so much, right? This is absolutely fine!

Even at first, I used to think like that.

In chess, a player wins by checkmating the opponent’s king. Checkmate means when the king has no legal moves left to get out of the threat. (If you want you can read about it in my article 7 Checkmate Rules Every Chess Player Should Know)

Also, in chess, you win if your opponent resigns. (check out my article 5 Reasons Why Chess Players Resign to know more about it)

But sometimes the positions are such that no matter what you and your opponent do, you both would keep chasing each other but couldn’t checkmate the king by any series of legal moves.

Such positions are considered a draw.

Now let’s discuss the possible ways in which a game can end in a draw.

Stalemate is a situation that occurs when the player’s king is not in check but the player doesn’t have any legal moves left to continue the game.

Isn’t this a special case? Generally, if the king is not in check then you would think that the player should continue making the moves.

But in case of a stalemate, there are no moves left. This is because the king is completely blocked. Here’s an image to explain this concept.

You cannot move the king to any other square because then it would be in check which is illegal. Moreover, if you think about other pieces then they may be blocked or are already exchanged.

I have already written an article, Difference Between Stalemate And Draw [Simplified], in that, I have talked about all these in more detail. You can check that out for further reference.

Hence whenever there is a stalemate the game ends in a draw.

Just suppose that you and your friend start playing chess. But then all your pieces are exchanged and at the end, you both are left with only the king. Then can you win?

Obviously no, because a king can’t capture or deliver a check to another king. I have talked about this more in my article Can A King Kill A King In Chess? (Explained) which you can check out for further reference.

So basically you both are having insufficient material to checkmate each other. This happens not just with King vs King. But also with other combinations like,

So in all these cases, the game is drawn.

Now just think, why you should play if you already know that game is heading towards a drawn position.

The point is that players that are more professionals are capable of anticipating such positions and offer a draw.

If you want to know the exact procedure of offering a draw, when should you offer a draw, and a much more, then check out my detailed article How To Offer And Accept A Draw In Chess: Helpful Guide

If the same position is repeated three times then the player having the move can claim a draw.

Also Read: Can You Repeat Moves In Chess?

If no pawn movement and no capture has been made within the last 50 moves then the player having the move can claim a draw.

If the same position is repeated for at least five times, then the game is drawn.

If no pawn movement and no capture has been made within the last 75 moves, then the game is drawn

So whenever chess players think that the game is going closer to any of the above cases, they offer a draw.

Chess Players Offer A Draw When They Are Tired

Now some games are so long that you will get totally exhausted. But what if you have to play another chess game.

Would you be able to play chess with that much efficiency exactly as before?

So, chess players, if they think that the game is going towards the drawn position, and offering a draw would not cost them much, then they offer a draw.

This not only saves their time and energy but also helps to prepare for the next game.

Why Do Grandmasters Draw So Much?

Grandmasters can analyze the positions better than other chess players. So if they notice that the game is heading towards a draw position, then they might draw or might be they are tired.

So that’s it! Hope you found this article helpful. If you liked reading this article then also share it with others. Interested to read more? Then also check out these articles written by that will help you to clear some of your doubts.

Thanks! Have a nice day!

And wait! Do you want some gift ideas for chess lovers? Then check out this article by me: 15 Best Funny Chess Gift Ideas That Will Make You Smile!