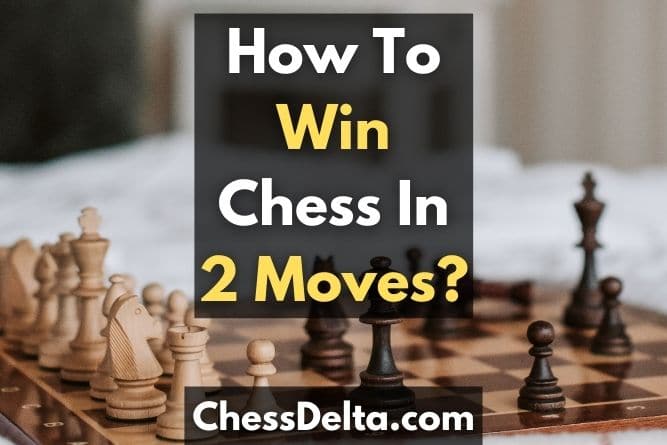 Yes, one can win a chess game in 2 moves by the Fool’s mate. In this two-move checkmate, the black queen checkmates the white king on the second move. However, this checkmate can only be achieved if the opponent makes a sequence of bad moves.

It occurs only when the opponent makes foolish moves and hence the name of this two-move checkmate pattern is Fool’s Mate.

To win chess by this checkmating pattern in 2 moves your opponent must be white and you must be black.

Here’s my video in which I show you step-by-step how to win chess in 2 moves. You can watch it or else continue reading!

Here’s how you can win a chess game in 2 moves:

As you can see on the first move the white player moves the pawn to f4 square. Note that at the start of the game the pawns on f2 and f7 squares are weak because they are only protected by the king.

Any piece that is just protected by the king is considered weak because at least you can sacrifice other pieces but not the king. Whenever a player’s king gets checkmated, he or she loses the game.

So moving this pawn, a player only invites the opponent to attack. So to avoid this fool’s mate to happen if you are white, you can avoid moving these f file pawns.

Anyways, let’s move on to our next step.

Step-2: You move the black pawn to e6 square

In response, you with black chess pieces, move your black pawn e6 square making a room for your queen from behind.

Note that this two-move checkmate (Fool’s mate) can also happen if the white pawn in step was moved only one step (up to f3 square) instead of two squares (up to f4 square) provided rest everything remains the same.

Also Read: How To Win Chess In 5 Moves?

White then moves the pawn to g4 square and bang! White makes the biggest blunder by making this move.

As you can see in the image, the white king is not protected by any of the supporting pieces. This is a very dangerous situation as the opponent can take the advantage of this situation and easily checkmates the white king.

And the same thing happens in the next move.

Step-4: You checkmate the white king by moving the black queen to h4 square

As soon as you move your black queen on h4 square the white king gets checkmated. The white rook can’t save the king because it can’t move diagonally.

The white knight would be of no use since it can move in an L shape and here in this position it can’t protect the white king from the attack.

The white bishop can’t do anything because it can only move diagonally and by doing that also you can’t block the attack by the black queen.

Also, the white pawns are of no use here because the two pawns already moved ahead, and remember that in chess the pawn can’t move backward.

The remaining white pawn on the h2 square also can’t do anything because it can move only one step.

So long story short, the white king is helpless and can’t save itself from the attack of the black queen and hence gets checkmated.

In fact, in chess ‘checkmate’ comes from the Persian word “shah mat” which means the king is helpless. You can also read more about what is checkmate and the checkmate rules.

You may be also wondering, can I achieve this checkmating pattern if I’m having the white chess pieces?

So the answer is yes, you can, but you won’t be able to achieve that in two moves.

If you are white and want to achieve this checkmate then you would require three moves and this is known as the “Reversed Fool’s Mate“.

Since this fool’s mate (or the two-move checkmate) is easy and most chess players already know about this, it occurs rarely in a game.

But if you are playing with an absolute beginner, hope that he or she makes this sequence of bad moves so that you can deliver the checkmate and win the game in 2 moves.

That’s it! Hope you understood everything. If you found this article helpful then please do consider sharing it with others. Thanks!