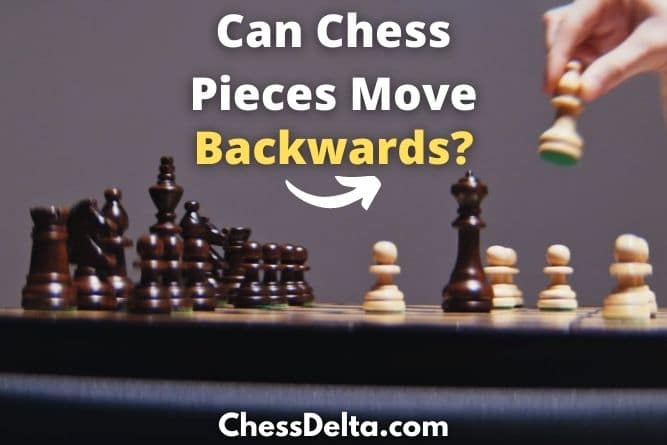 If you want to play chess properly then one of the first and the most basic thing you should know is the movement of the chess pieces. But one question may arise in your mind, can chess pieces move backwards?

As per the standard rules of chess, all chess pieces can move backwards, except pawns. However, it is not permitted to move a piece to the square occupied by the piece of the same color.

In chess, there are standard rules you need to follow otherwise your move will be considered an illegal move.

Read More: What Is Considered An Illegal Move In Chess? (Explained)

The World Chess Federation, FIDE, is the international chess governing body. In the FIDE Laws of chess handbook, all the standard chess rules are mentioned.

Now in that, in the FIDE article 3, there is a proper description of which way the chess pieces exactly move.

Further in this article, I’m going to discuss all the important chess rules related to moving the pieces. But before that let’s discuss how each chess pieces move, and if they can move backward or not.

Can A Knight Move Backwards?

Yes, a knight can move backwards. The knight moves in an L pattern, first two steps vertically and then one step horizontally or vice versa.

Knight is the only chess piece that can even jump over other pieces.

Here’s an example to show you how a knight moves in chess.

Read More: How Does The Knight Move In Chess?

Can A Pawn Move Backwards?

No, a pawn can’t move backward in chess. As per the standard rules, a pawn can move forward one step in a single move and two steps, only on the first move.

There are two special moves associated with pawns: one is en passant and another is pawn promotion.

Pawns can’t move backward and hence it is advised to move them wisely. Making unnecessary pawn moves during the opening phase can develop weak areas and provide an opportunity for your opponent to attack.

Here’ an example of how pawns move in chess.

I have written a detailed article on can pawns move backwards in chess. You can check that out to know more.

Can A Bishop Move Backwards?

Read More: How Do Bishops Move In Chess?

Can A King Move Backwards?

Only castling is the move where a king moves more than one squares in a single turn. You can read more about castling and its types here.

Although the king is the most valuable chess piece, it is not the most powerful piece which you can already notice from its mobility on the board.

Read Related: Logic Behind Why Is The King So Weak In Chess?

Here’ an example of how the king moves in chess.

Read More: How Does The King Move In Chess?

Can A Queen Move Backwards?

Due to its high mobility the queen is considered as the most powerful piece in chess. A rook has combined power of rook and bishop.

Here’s an example of how the queen moves in chess.

Can A Rook Move Backwards?

Rook is the second most powerful piece in chess. A rook can also castle with a king.

Here’s an example to show how the rook moves.

Read More: How Do Rooks Move In Chess?

You can’t move a piece to a square occupied by your own piece.

So in case you want to move the piece backward make sure that the square where you are going to place the chess piece is empty.

If a square is occupied by an opponent chess piece and you occupy that square then, the opponent piece is considered to be captured and removed from the board as a part of the same move.

Moreover, any chess piece that if moved, exposes the king of the same color to attack (check), then it can’t be moved.

Here’s an example to show this thing.

It’s black’s turn to move. As you can see the white rook is attacking the black king. So can the knight move backward?

The answer is no in this case because as soon as the knight leaves the square to move backward, the black king behind it would directly get exposed to the attack of the white rook.

More technically, this is called a check by the white rook on the black king.

So remember that you can’t move your chess piece backwards or in any direction if doing so exposes your king to attack (check) by your opponent’s piece.

Now apart from the rules I discussed, there are other chess rules as well. So you can check out the FIDE Laws of chess handbook for further reference.

Also, you can watch this video by Coach Dat, which explains how each chess piece moves and other related questions.

So that’s it! Hope you now completely know about which chess pieces cannot move backwards and which can move backwards. Please do share if you found this article helpful.

And are you a Beginner? Then check out my complete guide on how to play chess for beginners. This is a start-to-finish guide in which I teach you to play chess in step-by-step lessons. It is a completely free guide so I highly recommend checking it out!

Thanks and good luck!