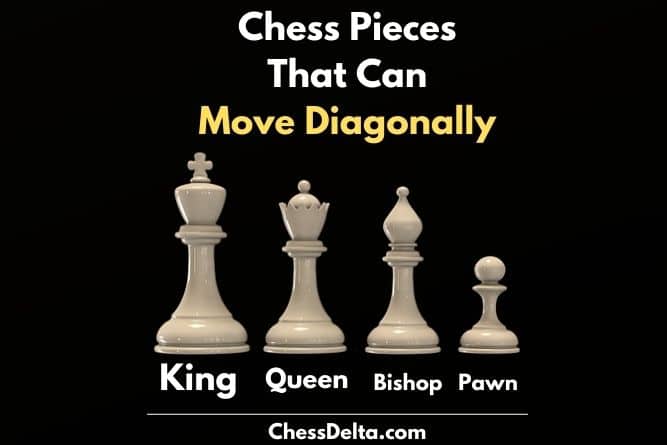 When you start learning chess, one of the first things you learn about is how the chess pieces move. And while studying that, a question may come to your mind, which chess piece can move diagonally?

In chess, the king, queen, bishop, and pawn are the only pieces that can move diagonally. The rook and knight can’t move diagonally because a rook moves in a straight line while the knight moves in an L-shape.

How the king moves diagonally?

A king can move diagonally, vertically as well horizontally in any direction but only up to one square in a single move. A king captures in the same way it moves. So it can take any enemy piece standing next to it, but except for another king.

A king can’t capture an enemy king. I have explained the reason for this in a bit more detail in my article Why A King Can’t Kill Another King In Chess? (Explained)

Note that a king is not the most powerful chess piece because as you can see it can move only up to one square (and the power of the chess piece also depends on its mobility).

Read Related: Logic Behind Why Is The King So Weak In Chess

But still, it is the most important chess piece. Since a chess game ends as soon as your king gets checkmated, right?

So the whole idea of a chess game is to save one’s own king and checkmate the opponent’s king.

When a king is in check (which means in the attack) and there is no way to take the king out of check then this is condition is called checkmate.

Also, there is a situation in which the king is not in check but still, the player has no legal move left to continue the game, called a stalemate.

Apart from these, a king has a special move called castling in which it moves two steps on either side from its starting square along with the rook in a single move. There are two types of castling one is kingside and another queenside. (Click the link to read more about them)

So these are the few basic things you are required to know about the king. Now let’s move on to our next chess piece.

How the queen moves diagonally?

A queen can move diagonally, horizontally as well as vertically, in any direction, and up to any number of squares in a single move.

A queen can capture any enemy piece that comes on its path of movement but only one in a single move. Due to its high mobility on the board, a queen is considered the most powerful chess piece.

How the bishop moves diagonally?

Bishop is the only chess piece in chess that can only move diagonally, backward as well as forward. A bishop cannot move horizontally or vertically.

A bishop can capture any piece that comes on its way but only one in a single move.

Now let’s discuss a very frequent question that many beginners have. Which chess piece can move only diagonally on either black or white squares?

In chess, each chess player has two such bishops. Now this limitation of only one colored square is rather considered as a weakness because it hurts the effectiveness of a single bishop.

But, two bishops working together can cut thorough out the position of an opponent like the pair of scissors.

How the pawn moves diagonally?

Generally, a pawn moves one step forward. It can also move two steps forward but only on its first move. A pawn can move diagonally only while capturing an enemy piece.

Also, the pawn is the only chess piece that can’t move backward. It is due to this reason that it advised to move the pawns wisely and avoid making unnecessary pawn moves during the early phase of the game.

There are two special moves associated with pawn, one is en passant and another is pawn promotion.

A rook can only move horizontally backward, forward, as well as sideways up to any number of squares in a single move. But a rook can’t move diagonally.

A knight moves in an L shape in any direction in a single move. The movement of the knight is peculiar and can’t be classified as horizontally, vertically, or diagonally. Hence a knight can’t move diagonally.

It goes two steps straight and suddenly takes turn one step on the adjacent square. It is the only chess piece that can jump over the other pieces.

A knight can capture any piece that is occupying the square it is going to finally land. You can read more about knight moves in chess here.

So that’s it! Hope you liked reading. Consider sharing this with others if you found this article helpful.

Which chess piece can move any direction?

Which chess piece only moves diagonally?

In chess, the king, queen, bishop, and pawn can move diagonally. But the bishop is the only chess piece that only moves diagonally.

What are the 16 pieces in chess called?

In chess, each side has 16 pieces. Out of them, the 8 small pieces are called the pawns, and the rest 8 pieces include one king, one queen, two bishops, two knights, and two rooks.