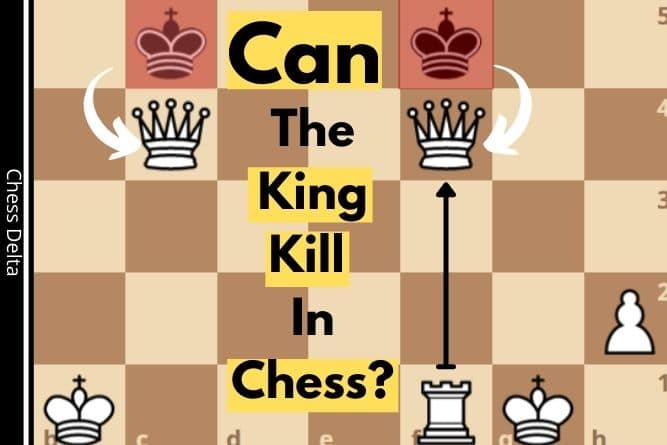 Remember that one king can never check or attack another king directly. This is because as soon it tries to approach next to another king, it gets into check which is not allowed.

Hence one king can’t capture or kill another king. Read my detailed article about can a king kill a king in chess to know more.

Ahead I’m going to clarify all of your doubts along with the proper illustration, but before that let’s discuss how the king moves in chess (in brief).

How Does The King Move In Chess?

A king moves only one square in any direction provided that square is vacant and not controlled by another chess piece.

Here’s a video by Howcast that will help you to understand how the king moves in chess and all other related concepts.

Can The King Kill If In Check?

As you can see in the image black king is in check and attacked by the white queen. So what would you do if you had the black chess piece?

Particularly, here we are discussing the third case, to kill the attacking chess piece. But is it possible? Before answering that, I want you to remember one rule from now onwards and that is:

As per the World Chess Federation (FIDE) rules

So any move you make that goes against this rule will be considered illegal and will be not allowed to make.

Now, I ask you can the black king kill or capture the white queen? The answer is yes because there is no threat in doing that, right?

Also Read: Can You Double Kill In Chess? (Explained)

(See the image that I showed you earlier and come back again) So as you can see in case – 2 also the black king is attacked by the white queen.

But one thing if you noticed is that this time white rook is supporting the white queen. So can the king kill in this case?

The answer is no. This is because as soon as the black king will capture the white queen it will get exposed to check by the white rook.

Read Related: Can A King Kill To Get Out Of Check? (Explained)

And as I told you earlier, you can’t make any move that puts your king into check. Hence the king can’t kill in check in this case.

What Happens If You Move Your King Into Check?

It is considered an illegal move to move one’s own king into check. In casual games, nothing happens and you can just take back your move. But in professional games, after making two illegal moves you lose provided the opponent has sufficient chess pieces to checkmate your king.

An illegal move is any move that doesn’t follow the standard rules of chess. You can read more about it in my article: Illegal Moves In Chess: Everything You Need Know (With Examples)

Can You Move Yourself Into Checkmate?

Whether you put your king in check or checkmate intentionally or accidentally, it is considered an illegal move.

Read More: What Happens If You Accidentally Put Yourself In Checkmate?

In short, you can remember like this: Any move that puts your king into check is not allowed. Recall this statement every time you make a move to prevent making mistakes.

So that’s it! Hope you found this post helpful. Now below I have shared the answers to some of the related frequently asked questions which you can read to clear your doubts. Till then Thanks, and Good Luck!

Wait! Do you want to play chess but don’t have a good chess set? Then check out my recommendations on the Top 7 Best Chess Sets For Beginners (With Buying Guide)

Can king kill anyone in chess?

Yes, a king can kill anyone in chess as long as doing that doesn’t put the king in check. As per the standard rules, it is illegal to make a move that puts your king in check.

Can the king attack in check?

Yes, a king can attack in check but only if doing that helps the king to get out of check. Out of the three ways of getting the king out of check, one of them is to counter-attack the attacking chess piece.

Can the king defend himself in chess?

Yes, a king can defend himself from attack and there are three ways for doing it. First, moving the king to a safer square. Second, blocking the attack by putting a piece between the king and attacking chess piece and third is to counter-attack the enemy piece.

Can the king kill diagonally in chess?

Yes, a king can kill diagonally as well in any direction up to one adjacent square. However, if killing a piece puts the king in check, then it is not allowed.

Can a king kill a pawn in chess?

Yes, a king can kill a pawn in chess as long as doing that doesn’t put the king in check. As per the standard rules, it is illegal to make a move that puts your king in check.

Can king kill a queen in chess?

Yes, a king can kill a queen as long as that doesn’t put it in check. You can read my article Can A King Capture A Queen In Chess to know more.