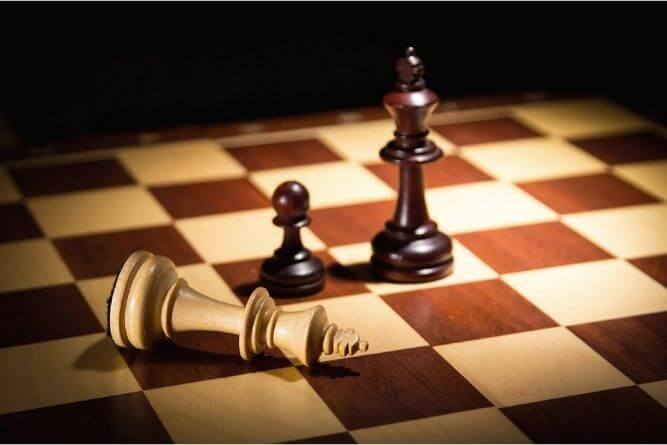 In chess, a king has the power to move one square in any direction. Its power increases when the game reaches closer to the endgame. But, can a king kill a king in chess?

No, a king can’t kill a king in chess. Moving the kings next to each other is not allowed in chess as it also puts the first king in check which is illegal. However, a king can checkmate another king indirectly.

This can be done by either castling or moving the king away from the way of the attacking chess piece. All these concepts are explained ahead in more detail. So to clarify all the concepts continue reading till the end!

What do you mean by putting your king into check?

In simple words, putting the king into check means the king is in the threat of being captured on the opponent’s next move.

Note that I said, the threat of being captured in the opponent’s next move. The game of chess ends just before the king is actually captured, at the point when it gets checkmated. So technically a king can’t be captured in chess.

You are not allowed to put your king in check or make a move that exposes it to check.

A king can get into check in various ways and there are actually three ways the king can respond to get out of check.

See Related: Can A King Kill A Queen In Chess?

So these were some basic concepts you need to know. If you understood everything properly up till now, then further reading will be much easier for you. Let’s start!

Why is it illegal to checkmate a king directly with your king?

Let’s understand this concept of king vs king in chess with an example.

Here as you can see the red spot mark in the image highlights the square controlled by both kings.

Now if suppose the white king tries to jump on the red spot square in order to checkmate the opponent’s king, I ask you will it be a legal or illegal move?

Yes, it will be an illegal move for white to do this because then it will be in check. And we already know that you cannot move your king into check.

Thus, it is illegal to checkmate the opponent’s king directly with your king.

Also See: Can A Pawn Check A King? (How? A Beginner’s Guide)

So now you know, it is illegal to checkmate the opponent’s king with your king directly. But is there any legal way to do it? Yes, let’s discuss about that!

How to checkmate the king in a legal way?

1. King checkmating another king by castling

Checkmating the opponent’s king by castling is very rare and I guess you came to know this for the first time, right? Anyways, this is possible, although occurs very rarely.

Here’s a famous game played between Paul Morphy and his opponent where he checkmated the opponent’s king by castling. Let’s understand this game pointwise.

Read Related: Can You Castle Out Of Check? (Explained With Rules)

This way you can checkmate your opponent’s king. But as you have noticed, you are actually checkmating the opponent’s king in an indirect way. Now let’s see the other method.

2. Checkmating a king by moving your king away from the way of the attacking piece

Another legit way of checkmating the opponent’s king is by moving away from the way of your attacking chess piece. Here’s the position of a game and let’s understand this as well, pointwise.

Thus in this way you can checkmate the opponent’s king with your king by just moving away from the way of the attacking chess piece. Although this method is also indirect.

Now after discussing everything, let’s see a real life incident when a player tries to capture the opponent’s king by mistake.

Also Read: Why Is The King So Weak In Chess?

We generally think that grandmasters are highly superior and they rarely make any mistake, right?

But this is not the case. They are also humans. They also make mistakes. In the following game (GM Vidit Gujrathi vs GM Hikaru Nakamura), Vidit was playing all fine but then during the endgame, he made a mistake.

He tried to capture the king of Nakamura which was totally illegal move.

Nakamura immediately noticed this and asked the arbiter for help. Then after that, the game was set up again as usual.

Here’s a video of this game by ChessBase India which you watch to know more about this incident.

Now let’s summarize all the important rules about the king in chess, how it moves and captures so that you never get confused again.

#1. A king can move vertically, horizontally as well as diagonally in any direction but only up to one step in a single turn.

By the way, if you are new to chess, then you can check out my in-depth article on how does the king move in chess.

#2. A player is not allowed to make a move that puts the king in check or exposes the king to check.

Read Related: Can The Kill In Chess? (Explained Case-By-Case)

#3. The ultimate goal of a player is to attack the opponent’s king in such a way that there are no legal moves left for that king and this condition is known as checkmate.

#4. The player who checkmates the opponent’s king wins the game while the player getting checkmated loses the game.

#5. The game immediately ends whenever there is a checkmate.

#6. If a player’s king is not under attack but still there no legal moves left for that player to make then this condition is known as a stalemate.

You can read more about it in my article: Stalemate Vs Checkmate: Helpful Guide for Beginners!

So these are some of the basic chess rules for the king.

Also, there are some rules you need to know other than these ones which you can check out in my detailed article on important checkmate rules.

Every move you make in chess is governed by certain rules and regulations. If you violate any of those rules then definitely, your move is considered an illegal move.

Read Related: What Happens When Only The King Is Left?

But, if you follow all the rules and regulations then you don’t have to worry about anything. Now below are some related frequently asked questions which you should read to clarify the concepts more easily.

Can a king check a king?

No, a king can’t check a king because that would put the first king in check which is illegal. However, there are indirect ways to check a king like castling or moving the king away from the way of the attacking chess piece.

Can a king kill backwards in chess?

A king can kill a chess piece up to one step in any direction as long as that doesn’t put the king in check. However, a king can’t kill another king because a king can only be checked or checkmated but not be killed or captured.

What happens if you kill the king in chess?

In chess, you can’t kill the king but can only check or checkmate it. So after you checkmating your opponent’s king, you win the game. However, killing or capturing the king would be considered an illegal move.

Can a king capture a king?

Can a king attack in chess?

Yes, a king can attack in chess as long as doing that doesn’t put it in check. If the opponent piece is supported by another opponent piece, then the king can’t attack it because doing that would put the king in check which is illegal.

Who can kill king in chess?

No chess piece can kill a king because a game of chess ends just before the king is captured. However, all the chess pieces can give check and checkmate to the king with the exception of another king which can do it indirectly.

Can a king take a king in chess?

No, a king can’t take a king in chess because whenever a king tries to approach near another king, the first king gets into check which is illegal. As per the standard rules, it is not allowed to make a move that puts the king in check.

Can a king stand next to a king in chess?

No, a king can’t stand next to a king because that would put the first king in check which is illegal. However, both kings can be next to each other with a gap of one square between them which is known as opposition in chess.

Can 2 kings face each other in chess?

Yes, two kings can face each other in chess with a square between them which is known as opposition. However, two kings can’t move immediately adjacent to each other because that would put the first king in check which is illegal.

Can a king put a king in checkmate?

Yes, a king can put a king in checkmate but only indirectly by either castling or moving the king away from the way of the attacking chess piece. A king can’t check or checkmate another king directly because that would also put the first king in check which is illegal.

Can you checkmate with a king?

Yes, you can checkmate with a king as long as your king is not in check, or by doing so it doesn’t get into check. However, you also require the support of other chess pieces as you can’t checkmate with just a king.

That’s it! Hope you liked reading this article. Please do share if I was able to solve all your all doubts. Thanks.

And, if you are looking for some awesome chess products then don’t forget to check out my chess recommendations page.