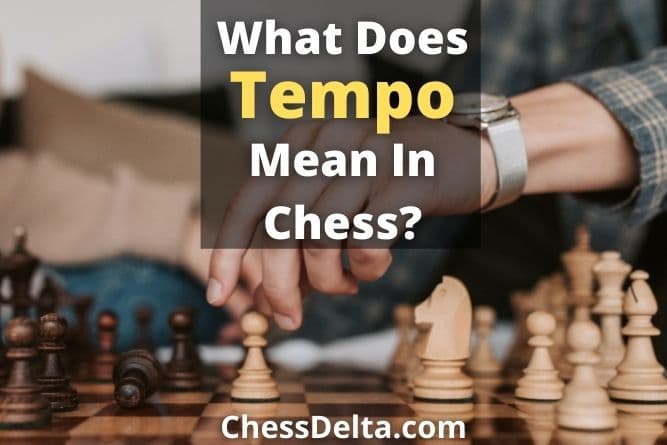 You might have heard the word ‘tempo’ many times in chess. Also, phrases such as ‘gaining a tempo’, ‘with tempo’, or ‘losing a tempo’. But do you know what does tempo means?

A tempo means a turn to move. It is the way time is measured in chess. When a player makes the opponent waste a turn, the player gains a tempo while the opponent loses a tempo.

The word ‘tempi’ is the plural form of the word ‘tempo’. A move that helps you to gain a tempo is often called a move with tempo.

‘Tempo’ is the Italian word for time. It comes from the Latin word ‘tempus’. When we want to talk about more than one tempo then we use the plural form ‘tempi’ (rhymes with word pea).

Here’s a video by ChessGeek which explains the concept of tempo in simple words. You can watch this video to clarify this concept.

Ahead in this article, I’m going to explain the concept of tempo in such a way that you will never forget its core meaning ever, along with an example. So just keep read till the end!

An example to explain what is a tempo in chess

Now tell me is this move by white a good move?

No, this is rather a mistake made by the white. Before I tell you the reason you must know the basic opening principles because only then you would know how the first few moves are made in the game.

During the opening phase, both the players try to control the center of the board. And so white moved the pawn on e4 to take over the control on d5 square.

Black in response moved to e6 to compete with the white for controlling the d5. Up to this, everything was fine but then white moved the bishop to c4 square, it was a mistake, and here’s why.

Bb5+ is again a mistake by white. Remember, checks are not always good moves. Another tempo will be lost because of this move.

Also Read: What Is The Difference Between Mistake And Blunder In Chess? (Explained)

By moving the pawn to c6, black not only control the center but also attack the white bishop again.

Here driving the bishop back by moving the black pawn b5 is not a good move because it doesn’t help the black to develop.

To gain a tempo black needs to make a useful move and so moves the knight to f6.

White again makes a mistake here by moving the queen out early. Queen is considered the most powerful chess piece, so if you take it out in the initial stages then it becomes highly prone to attack by less valuable pieces of your opponent.

And you don’t want to lose your queen just for a piece like a pawn or even a bishop in the initial stages, isn’t it? Hence, it is advised to first develop the minor pieces and then only develop the major pieces (the queen and the rook).

Now here bringing the queen out so early, causes the white to lose tempi if the opponent can chase the queen with developing moves.

As the white queen dodges the attacks, the opponent (black) keeps on activating piece after piece.

In this case, black develops with a check and so white has to make a useless king move thus losing a tempo while black gaining a tempo, right?

So after white moves the king to f1 square, black does castling in order to activate the rook.

White moves the the pawn to h3 square attacking the black bishop on g4. But black ignores this attack and further brings the rook to the open file “with tempo”.

So the game continues like this and after a few moves black wins the game. The main motive behind telling you this example was to explain the concept of tempo and I hope you have understood it well.

How do you increase your tempo in chess?

Tempo simply means a turn to move. So to increase your tempo or to gain a tempo, you need to make the opponent waste a turn.

Now, your opponent won’t waste a turn unless you force him or her to do so.

Therefore, you have to make such moves that he or she is forced to make the useless moves while simultaneously you keep on developing your pieces.

You can force your opponent to move the same piece repeatedly because that allows you to gain tempo. Also, you can deliver checks to your opponent. Checks often help you to win a tempo because the opponent has to take a time to save their king.

Recall the above example, after the black queen delivers a check to the white king, the white king was forced to make a useless move to f1 square, isn’t it? That’s how black gained tempo.