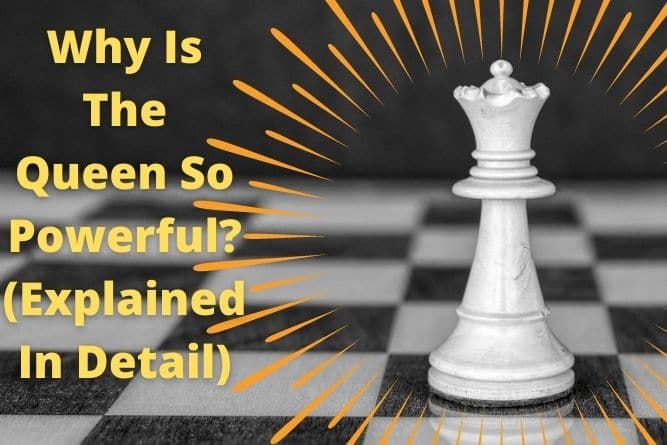 In chess, each chess piece has some power. The queen is the most powerful chess piece on the chessboard. So, why is the queen so powerful in chess?

In short, the queen is so powerful because its relative value is 9 which is higher than any other chess piece. It has the maximum mobility and combined power of rook and bishop. It can even checkmate a lone king with a king.

Let’s understand these reasons in a more detailed way. And don’t forget to read till the end because all your question regarding the queen’s power will be answered. So let’s start!

In chess, there is a relative value system according to which each piece is assigned with a value considering their worth when they exchanged. So, as per this system, Queen is assigned 9 points.

As you can see in the above table, a pawn is worth 1 point. So it means losing a queen is equivalent to losing 9 pawns. Considering this fact, you can imagine how powerful and valuable a queen is in chess.

One thing you should keep in mind, this point system is only to give you a general idea about the value of each of the chess pieces.

Rest everything depends on the position of the pieces on the board. So, you have to evaluate the position and make your moves accordingly.

Queen Has The Maximum Mobility On The Board

A Queen has the maximum ability or freedom in a chessboard because it can move in any direction vertically, horizontally, and even diagonally.

It can control many squares at a time and proves to be a very powerful attacking piece.

Since it has the ability to move in any direction, it can threaten many chess pieces at a time. It can pin, fork, and involve in many other tactical combinations.

In open lines, means the files (columns on the chessboard) which are not blocked, queen become a very powerful and attacking chess piece.

One of the many reasons why many beginners lose the game early on is because they sacrifice their queen early on without a strong reason.

Queen Has The Combined Power Of Rook And Bishop

A Queen has the power of both rook and bishop. Rook can move horizontally and vertically while a bishop can move only diagonally but the queen has both these powers.

Moreover, a bishop can move only on single color squares. But a rook, as well as a queen, can move on any square irrespective of its color.

And do you know that after the queen, the rook is the second most powerful chess piece!

Queen Can Checkmate A Lone King With A King

Checkmate is the ultimate aim of any chess player to win a game.

Now, you should know that it is not possible to checkmate a lone king of the opponent with any random chess piece combination.

For example, you are not able to checkmate with a single knight and a king against a lone king.

But, with just a queen and a king against a lone king you can easily checkmate (provided you know the basic checkmating procedures). So this also highlights the power of the queen in chess.

Now having talked so much about the power of the queen, a genuine doubt may come to our mind that why the king (though the most valuable chess piece) is far less powerful than the queen. So let’s see!

Why Is Queen More Powerful Than King?

The queen has the maximum mobility on the chessboard. Although the king is the most valuable chess piece, its mobility is limited. So in that sense, the queen is more powerful than the king in chess.

In the relative value system there is no exact value assigned to a king because it can’t be exchanged (a king can’t be killed by any chess piece; it can only be checkmated. Read this article to know more)

When a king is checkmated, you lose the game. And no one wants to lose a chess game, right? So considering that, its value is infinite.

But that does not mean that the king is more powerful.

Read More: Why The King Is So Weak In Chess?

Was The Queen So Powerful In The Past?

No, the queen in chess was not powerful as it is today. Let’s see why!

As per Wikipedia, chess originated in India around the 7th century AD. After that, it went to Persia and after that to Arab and finally reached Europe.

In Europe, in the 15th-century, chess evolved to its present form.

Names of many chess pieces were changed, piece movement was also changed.

The piece that we now call as queen, was previously known as a Wazir (Mantri) which means advisor of a king and was allowed to move only one square diagonally.

So, the queen was rather one of the weakest chess pieces in the past.

As per Wikipedia, the queen’s move took its modern form during the 15th century. It gained the combined power of both the rook and bishop.

According to many chess historians like Murray H.J.R. and Yalom, the reason behind the rise of the queen in chess is connected with the rise of female monarchs in Europe (Source).

Is There Any Weakness Of The Queen In Chess?

As there are two sides of a coin, the power of the Queen also gives rise to some weaknesses for it.

Firstly, one of the major weaknesses of the queen is, it is very vulnerable to causing a stalemate in chess.

In case you don’t know, a stalemate occurs when a player’s king is not in check but the player doesn’t have any other legal move to make. The game immediately ends in a draw whenever it occurs.

And tell me, would you like to settle for a draw if you were just going to win the game? Obviously no, right!

Due to this reason sometimes a pawn is not promoted to a queen.

The reason why the queen sometimes causes a stalemate is that it controls so many squares at a time that, sometimes it eats up all the remaining squares of the opponent’s king, except the square where it stands. This easily gives rise to the condition of a stalemate.

Also Read: How To Avoid Stalemate In Chess? (5 Practical Tips)

Another weakness of Queen is because it is so powerful it can’t be used during the opening phase. Since, during this time, most of the less valuable pieces are wandering on the board.

So it would be very easy for them to target the queen and capture it even if they get exchanged in this process. So you can’t use the queen unless the board is safe for it.

Lastly, a queen can’t jump like a knight over other chess pieces. To know more, read my detailed article on can a queen move like a knight.

Other than these, there are no such weaknesses of the queen.

“If you use the power of the queen wisely then it can be a very helpful chess piece for you.”

So that’s it! I hope you like reading this article. If you found this article helpful then definitely share it with others.

And if you have some time, I recommend you to also check out the other articles on this website. I have written many helpful resourceful articles that would increase your chess knowledge and clear your doubts.

Thanks! And Good Luck! 🙂