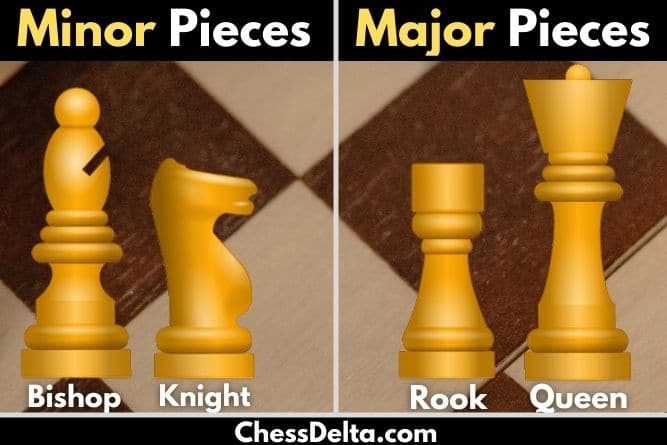 You may have heard a lot about the term “minor pieces” and “major pieces”. If you came here to know about them then you are in the right place. So let’s start!

What are minor pieces in chess?

Minor pieces in chess refer to bishops and knights. They are considered minor pieces because although they are important, they are not as important as the major pieces such as the rook and the queen.

There is a chess piece relative value system that assigns points value to chess pieces based on their relative strength in potential exchanges. So as per that,

Remember, this point system is just to give us a general idea and we should not blindly rely on this system because the position of the board plays an important.

You can read my article on chess piece value here.

No, pawns aren’t minor pieces nor major pieces. Usually, in chess, a pawn is not considered a piece. The usage of the term piece is different according to the different contexts.

As per Wikipedia, the term piece mean different in different situations like:

So as you can see according to different contexts, how we use the term piece also changes.

Which minor pieces is better to have in the end game and why?

As the game reaches closer to the endgame, more pieces are exchanged. So the positions get opened up.

Now, a knight moves in an L shape and jumps over the pieces. But a bishop moves up to any number of vacant squares along its diagonals.

So a bishop can move one corner of the board to another in just one move. Whereas for covering the same distance it would take a longer time for a knight. I hope you got my point!

You can read my article on: Should You Sacrifice A Bishop For A Knight?

What are the major pieces in chess?

Major pieces in chess refer to the rook and queen. They are considered major pieces because they are more important than the minor pieces such as the bishop and the knight.

In the opening phase of a chess game, it is generally advised to first develop the minor pieces such as the knight and bishop.

The major pieces should not be brought out too early because your opponent can capture them. And you don’t want to lose your valuable pieces early on in your game, isn’t it?

You can watch this video by Chess Vibes, to know about major and minor pieces.

So this was all about the major and minor pieces in chess. I hope you liked reading this article, please do share if you found it helpful.

That’s it! Thanks and have a nice day!