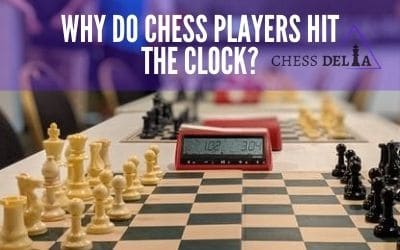 Chess players hit the clock in order to stop their timer and start their opponent’s timer. Chess clocks are made such that hitting the clock automatically stops the time of the player pressing the clock and starts the opponent’s one.

A chess clock is made up of two adjacent clocks that display the timer for each player. For casual play, you won’t require any chess clock. But in tournaments, it is a must.

Note that here when I say “hitting the clock” I mean to say “pressing or tapping the clock”. In the FIDE Laws of chess, it is mentioned that the player must handle the chess clock properly.

As per Wikipedia, chess clocks were first played in a tournament during the 1883 chess tournament. After that its use spread to many other board games.

Chess clocks are used in order to keep time control in a tournament. Otherwise, the game would extend for long hours.

You can also read my article on chess clocks.

Now, let’s move on ahead.

Why do chess players hit the clock with only the hand that they used to move the chess piece?

Using the same hand to hit the clock that is used to make a move:

According to the FIDE rules,

Therefore, since it is mentioned in the rules, a player has to follow it. You can check out the FIDE Laws Of Chess here.

Now, the following are some of the problems that can arise if the players don’t hit the clock with one hand that they used to move the piece:

1. Hitting the clock without making the move

If chess players were allowed to hit the clock with either hand then many times it may happen that they missed out a move but pressed the clock.

Especially, during the fast format games like blitz in which you have very little time this issue can come.

During the last minute of the game, each player moves the pieces as fast as possible so that they don’t run out of time. In that case, it can happen to forget about the move and just hitting the clock in nervousness.

2. Hitting the clock before completing the move

It can happen that a player pressed the clock even before hitting the move. During the final minutes, the game goes on very rapidly. You might have seen that in many games.

So it is very common that you accidentally hit the clock even before completing your move and that would be totally against the rule.

3. Hitting the clock simultaneously with the opponent

If it was allowed to hit the clock with either of the hands then the probability of pressing the clock at the same time when your opponent hit the clock, would become very high.

Just imagine that you and your opponent are making the move while both of you have one hand just above the clock. So, won’t you think that both of you might hit the clock at the same time?

In the rule, it is already discussed that you can’t hover your fingers or keep your other hand over the clock to save time. If that was allowed then just imagine how messy the game would look! It would be difficult to see which player made which move.

Normally, when players make a move and use only that hand to hit the clock then, first of all, it overcomes many issues that we discussed above, and secondly, the game looks very organized. So even when players are making the moves rapidly everything goes on well.

Also Read: What Happens When Chess Clock Runs Out?

Generally, when you play with your friends you don’t need to think about chess clocks and all the rules and regulations. But for tournaments, it is good to know all the required rules.

So that’s it! Hope you enjoyed reading this article. Please do share if this article helped you. And you can also check my article on the best chess clocks apps. Thanks!