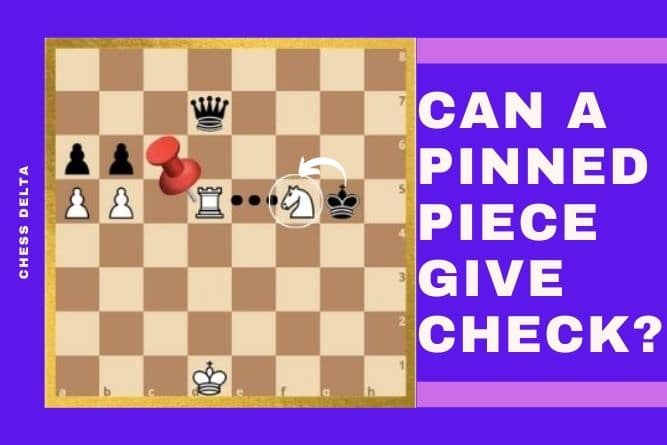 This is clearly mentioned in the FIDE Laws of Chess article 3.9. In fact it is clearly stated that if the piece giving check is constrained to move then also it is legal to deliver the check by that piece.

I know this all sounds little different from what we generally know about pinning in chess. But don’t worry! In this post I am gonna clear all your doubts.

I will discuss with you each and every concept of pinning along with a real game example of a pinned piece giving check and some other tips.

So if you are interested to know more, then just scroll down!

What do you mean by pin in chess? (In Brief)

In simple words, a pin is a situation in chess in which a piece can’t be moved to defend itself because then a more valuable piece behind it will get exposed to attack.

Here since the piece which is being attacked can’t move from its place so it is called a ‘pinned piece’ while the attacking piece is called the ‘pinning piece’.

Thus, the pinned piece is the piece between the attacking chess piece and the more valuable chess piece behind it. Pin is one of the most widely used tactics in chess.

One thing to note is that only three chess pieces have the ability to pin an enemy chess piece namely: queen, rook and bishop.

Bishop is the most common chess piece to pin the opponent’s chess piece. This is because it is easier for the bishop to find a more valuable chess piece then it is to attack.

Also Read My Article: Should You Trade A Bishop For A Knight?

There are many types of pins in chess like: absolute pin, relative pin, situational pin, cross pin and partial pin. Out of these the most important and relevant to our current question is ‘absolute pin’.

Absolute Pin – It is a type of pin tactic in which a piece is pinned to a more valuable piece than it and that is the king. This is called an absolute pin because moving the pinned piece will clearly give rise to check.

As per the standard rules we can’t put our king into check intentionally. So an absolute pinned piece can’t move.

This is what we generally learn about pin tactics in chess. But then can that pinned piece give check or be involved in a checkmate. Yes, we talked earlier, right? Relax! Let’s discuss that further in a more detailed way.

Why can a pinned piece give check?

A pinned piece can give check because even though it can’t move from its place, it still controls the square where the opponent’s king sits and thus can deliver the check.

Here’s an example to understand this concept:

Now, In this case, can the black’s king capture the white’s knight? To get to the answer let’s discuss the complete situation in a simplified way.

Thus, it is clear that a pinned piece can give check even by not moving away from its place.

Also See This Article: Can A King Kill A King In Chess? (Solved!)

Can a pinned piece be involved in checkmate?

In short, a pinned piece can even be involved in a checkmate. Here’s an example that proves this fact.

The black king is checkmated by white’s queen and white’s pinned bishop. Let’s understand this example in a more simplified manner:

Tip 🙂 Do you know when does the middle game start in chess? If not then check out that article by me, which will help you to figure out the exact time and thus strategize your game more effectively.

Why can’t a king capture a piece protected by a pinned piece?

A king can’t capture a piece protected by a pinned piece because even if the pinned piece can’t move from its place, it can still deliver the check. And it is illegal to move your king into check.

To understand this, first you have to understand the meaning of check and checkmate. Check means the king is going to be captured in the opponent’s next move (but you still might save the king)

While checkmate means the king has no legal way to save itself from being taken in the opponent’s next move and so the game ends.

The side being checkmated loses the game and side which checkmates win the game.

Thus, the game ends in a checkmate (before the king is captured in reality). Now consider the above example we discussed.

In that the black’s king can’t capture the white’s queen which is protected by a pinned piece (the white’s bishop). So why does that happen?

If black’s king captured the white’s queen then the pinned bishop could technically move and capture the black’s king (although not in reality). And this threat of the king being captured in the opponent’s next move, called as check.

As per the standard FIDE chess rules, you can’t move into check intentionally. (Kindly forgive me for repeating this line every now and then, actually it is very simple yet important to remember)

Hence it is not possible for a king to capture a piece protected by a pinned piece because that would be an illegal move.

Tip 🙂 I want to ask you a question Can you get out of check by castling? Are you confused? Want to know the perfect answer, then check out that in-depth article by me that will clear all your confusions.

I know how the things get mixed up when you start to study and practice more and more tactics. Just relax!

Just remember this point and take this as a reference whenever you are confused about making any move. This will help you a lot.

The more you indulge in chess the better you get at it. But yes you need to follow the right directions.

So that’s it! Hope I was able to clarify your doubts about pinning, check and checkmate.

Are you frustrated of losing the winning games just because of stalemate? Are you interested to know how to avoid it to win more games? Then check out my article: How To Avoid Stalemate In Chess? (5 Tips That Actually Work!)

Thanks and Good Luck!