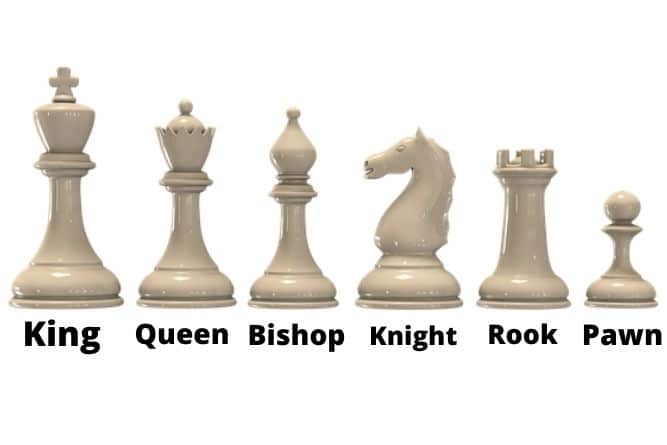 Looking at the chess pieces I often wondered why they have such specific names. And if you are thinking the same then you are at the right place.

So why are chess pieces named what they are?

Chess x
Chess
Originally chess pieces were named according to the four divisions of the army. But when chess reached Europe in the 15th century, the names of chess pieces changed from the original counselor, infantry, cavalry, elephantry, and chariotry to queen, pawn, knight, bishop, and rook respectively.

Later on, these names were standardized across the world and this is why chess pieces are named what they are.

Mantri or Wazir was now called the queen. Moreover, the moves of some chess pieces changed and some new rules like en passant and castling were even added.

So now I think you can relate why chess pieces are named liked what they are now. But this was just a short description. To learn more about the naming of the chess pieces, I encourage you to continue reading!

You can also check out some of the best chess sets here on Amazon.

As per Wikipedia, chess originated in India, by the 7th century CE. At that time, the game was called ‘chaturanga’ which means four limbs or four parts. The game was inspired by the battle and in fact, the chess pieces were named on the basis of four parts of the army: elephants, chariot, horsemen, and foot soldiers.

After that chess reached Persia and from there it reached Arab. Here the original name of chess, chaturanga was changed to shatranj.

From Arab chess passed to Europe about the 15th century (Wikipedia) and from there the major changes took place and the chess game evolved to its current form.

Here are the names of the chess pieces in some of the languages:

Note: If interested, you can check my detailed article on how each chess piece moves.

Rook was originally called ‘ratha‘ in Sanskrit which means chariot. In Persia it was called ‘rukh‘.

Later on, when chess reached Europe it was called ‘rocco’ meaning tower. After that, the similar-sounding word ‘rook’ came into existence.

You can read more about how the rook moves in chess here.

A bishop was previously called ‘alfil’ which means elephant. It is generally difficult to relate an elephant with a bishop because the bishop is so thin, right?

As per Wikipedia, the bishop is related to the elephant because the groove on it represents the tusk of the elephant.

But there is also a projection at the top of the bishop which resembles a mitre (tall headdress that bishops wear). So later on when chess reached Europe it came to be known as a bishop.

You can read more about the bishop moves in chess here.

Knight was known as a horse in India and Arab. Since Europeans were familiar with a horse so there was no major change in its name.

Although the horse gained a rider and finally came to be known as a knight so that it can be related with other chess pieces names: queen, bishop, and king.

Check out more about the knight moves in chess here.

Before chess reached Europe, Queen was known as ‘Mantri’ or ‘Wazir’ which means king’s advisor.

But after reaching Europe, as most other chess pieces were named representing the members of the royal court. So, the Mantri or Wazir now came to be known as Queen.

There are actually two reasons for this, firstly in Europe, it was thought that it is very natural to have a queen by the side of the king, and secondly, many ladies became the queen and were popular in those days.

Despite so many changes, the representation of the king remained the same. The king in India was known as ‘Rajah‘, in Persia known as ‘Shah‘. All that meant the same monarch status.

You can read my complete article on how the king moves in chess here.

As per Wikipedia, the name of pawn is derived from the French word ‘paon’ which means foot soldier. However in some other languages pawn also represents a farmer.

Interested to know how the pawns move? Then I highly recommend you to check out my article about how do pawns move in chess here.

So this was all about how all the chess pieces were named. Hope you enjoyed reading this post as much I liked sharing this with you.

Chess is definitely an interesting game and its evolution is also very interesting. And I highly suggest giving it a try if you haven’t already.

I already have an article on The Complete Beginner’s Guide On How To Play Chess. In that, I walk you through all the chess basics step by step in different lessons. If you are just starting out to learn chess, then you will really find the guide helpful.

That’s it! Thanks and Good Luck!

What do you call a camel in chess?

A bishop is called a camel in chess. It is actually called ‘uth’ which means camel in hindi. It can move diagonally back and forth.

What is an elephant called in chess?

A rook is called an elephant in chess. It is actually called a ‘hathi’ or ‘gaj’ which means elephant in hindi. It can move horizontally as well as vertically back and forth.

What is a soldier called in chess?

A pawn is called a soldier in chess. It can move two steps on the first move and in rest moves, it can move only one step. It has two special properties: promotion and en passant.

Why is a rook called a castle?

A rook resembles the castle so it is sometimes incorrectly and informally called a castle. Formerly the piece was called rukh (Persian word) which means chariot.

What is a Wazir in chess?

The queen is also called a ‘wazir’ or a ‘mantri’ which means a counselor. It can move in any direction but only it cannot jump. It is the most powerful chess piece.