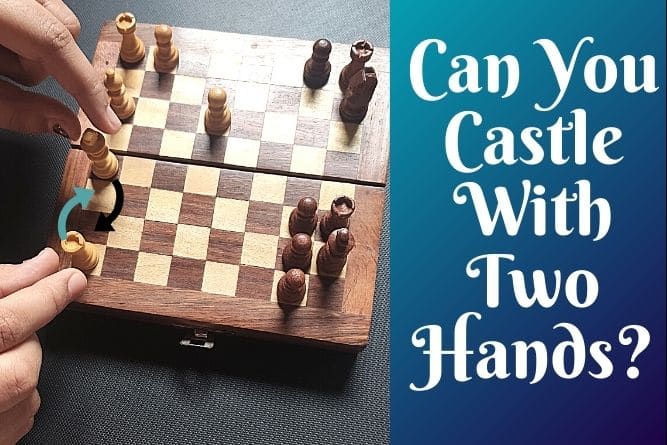 Castling is the only move in chess in which two pieces move in a single turn and that makes it quite special. But then the question arises, can you castle with two hands?

In the FIDE article 4.1 it is clearly stated that each move in chess has to be made with a single hand.

Many beginner and even advanced players generally castle with two hands either because they are unaware of the rule and have developed this as a habit or sometimes in fast format games they might want to save some time.

Now the point is if castling is the ultimate intention of any player then why is it considered as illegal if done with both hands. Right?

So let’s discuss that and don’t forget to read till the end because I will also discuss with you the incident in which a famous chess player made this mistake and finally the correct procedure of castling.

Why Is Castling With Two Hands Illegal?

In chess, as per the standard rules a player is supposed to make a move with one hand and press the clock with the same hand. So if castling with two hands was allowed, it would be difficult for a player to decide which hand to use for pressing the clock.

In the FIDE article 6.2.3, a player has to use the same hand as that used for making the move in order to press the clock. Moreover, it is not allowed to keep the fingers on the clock or hover over it.

Also Read: Why Do Chess Players Hit The Clock? (Explained)

Apart from this it would be quite unclear to know your intention if it was allowed to make a move with the use of two hands. As per the article 4.4.2, if a player deliberately touches the rook first and then the king, then the player loses the right to castle for that move. Instead the player would have to move the rook.

So if you would touch the rook (first) with one hand and the king with the other, then although having the intention to castle you would violate the rules and in return could not make the move you want. Thus there would be many complexities.

See Related: When Should You Castle In Chess? (Complete Guide)

Therefore to keep things simple it is not allowed to castle with two hands.

While he made this mistake GM Ian Nepomniachtchi didn’t notice it and continued to play the game. In fact the arbiters during that time overlooked this illegal move.

Eventually the game was won by GM Hikaru Nakamura. After game ended GM Ian Nepomniachtchi started tweeting about this thing. Moreover he also complained to FIDE regarding this issue giving the reference of the FIDE article 4.1.

But in return FIDE rejected the plea of GM Ian Nepomniachtchi referring to the article 4.8. As per this article a player loses a right to claim for the opponent’s violation of article 4 (from article 4.1 to article 4.7) once that player touches a piece with the intention of moving or capturing.

So in the result was with GM Hikaru Nakamura. However, the FIDE committee warned him to follow standard touch move rules. They also told GM Ian Nepomniachtchi to make such claims right after stopping the clock (before touching his pieces) and informing the arbiter instead of doing that after the game ends.

So now after reading all these you might be thinking then what is the correct procedure to castle. Right? So let’s talk about it as well.

What Is The Correct Procedure Of Castling?

The correct procedure to do castling is first touch the king and move it two squares on the side you wish. After that touch the rook with the same hand and place it just beside the king and then press the clock with same hand.

You also need to take care of certain points before you do castling.

So that’s it! I hope you liked reading this article and I hope I was able to solve all your doubts. If found this article helpful then please do share this with others. Thanks! & Good Luck!

Can both players castle in chess?

Yes, both players can castle in chess as long as it is legal to do so in their own moves. Each player can either do kingside castling or the queenside castling depending on their choice.

Can you castle with both the rooks?

No, castling can be done only with a king and a rook at a time as long as no rules are violated. However, if all the conditions of castling are met then the player has the option to castle on either side.