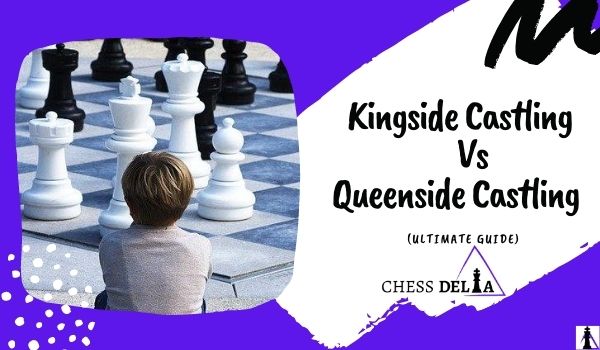 Castling is a very special move in chess. It is the only move in chess in which the two pieces king and rook move simultaneously in a single turn.

The king moves two squares on either left or right side of the board and the rook on that side moves just beside the king in castling. There are two ways to castle: One is kingside castling and another is queenside castling.

In this guide, I’ll be explaining to you what is kingside castling, what is queenside castling, the advantages, and disadvantages of both types of castling along with their comparison.

If you read till the end then your all doubts related to both types of castling will be solved. So without further ado, let’s dive in!

But before starting, it is necessary that you know the four rules of castling so let’s discuss that in brief. Always remember, you can castle only if:

I have written a complete article on when can you castle in chess. If interested, you can check that out!

Here’s an image that illustrates how to castle kingside:

The kingside castling is known as a short castle because the rook moves a short distance of only two squares.

What is the advantage of Kingside castling?

Following are the advantages of kingside castling:

Since in kingside castling the king is placed more closely to the edge of the board, it is safe. Moreover, all the pawns are also strong enough to guard the king.

This is not possible in queenside castling because a1 pawn is weak.

You have to spend a tempo for this. This is discussed ahead in this article.

You can do kingside castling easily after developing your bishop and knight. While in queenside castling it takes a longer time because you have to first develop knight, bishop, and the queen as well.

What is the disadvantage of Kingside castling?

Following are the disadvantages of kingside castling:

In kingside castling since the h1 rook is placed on f1 (refer to the above image) This position does not control the center of the chessboard. Hence rook is placed in the less active position.

You have to spend a tempo to move one square so that it can control the center. A tempo sometime proves to be very valuable for you and missing it might cost you a lot.

Here’s an image that illustrates how to castle queenside:

The queenside castling is known as a long castle because the rook moves a long distance of three squares.

What is the advantage of Queenside castling?

Following are the advantages of queenside castling:

King plays a very active role in the endgame. Queenside castling puts the king more towards the centre of the board. This helps you take control in endgame faster and attack your opponent.

As you can see in the image in queenside castling the a1 rook is placed on d1. This helps to activate your rook and push it into action early.

What is the disadvantage of Queenside castling?

Following are the disadvantages of Queenside castling:

Queenside castling takes a little bit longer time. We have to first develop our bishops, knights and queen then only we are able to do it.

Since it takes a longer time to first develop our pieces, queenside castling is less common in chess.

You can see the image of the chessboard positions and imagine what I am talking about, you will surely get it.

Read Related: What Is The Perfect Time To Castle In Chess?

In queenside castling, as you can see in the image the king is more nearer to the center of the board. So it is necessary to keep it more to the edge of the board. For that, we have to utilize a tempo (turn).

It is also important to guard the ‘weak pawn’ on ‘a’ file moving the one step more towards the edge. You might be ask me that why we should guard the ‘a’ file pawn.

It is because it will be the weak door and a good opportunity for the opponent to break the castle and attack your king from that side. (If you still don’t get me please refer to the image)

In this process we will utilize a tempo in this process. Losing a tempo sometimes can cost us a lot. So we have to keep that in mind while dealing with queenside castling.

When we decide to castle, it happens to most of us that we start to wonder and think about how to decide on which side to castle in chess. So I researched and here’s what I got. Is it better to castle kingside or queenside?

It is better to castle kingside considering the safety of your king and if you want to castle faster. But if the king is already guarded and you want to activate your rook then queenside castling is a better option.

Is it better to castle kingside or queenside?

When we decide to castle, it happens to most of us that we start to wonder and think about how to decide on which side to castle in chess. So I researched and here’s what I got. Is it better to castle kingside or queenside?

It is better to castle kingside considering the safety of your king and if you want to castle faster. But if the king is already guarded and you want to activate your rook then queenside castling is a better option.

Kingside castling is better because it can be achieved faster. It places the king in a very safe position near the edge of the board. Considering the king’s safety it is better than queenside.

However there may be instances where queenside castling would be a better option.

Also Read: Castling With Two Hands: Is It Illegal? (Explained)

When pieces are traded early on it is better to castle queenside. First of all you will not only be able to take more control over the centre activating your rooks, but also get benefit for the end game since the king is nearer to the centre of the board.

But queenside castling happens very rare because of the time it takes to achieve. First you have to develop your pieces including the queen and then only you castle queenside.

What is opposite side castling?

Castling in which both the opponents choose to castle the alternate side of each other. For example, if a player castles kingside then the opponent chooses to castle queenside and vice versa.

This castling gives rise to fierce battles because both players’ pawns are free to move forward and attack each other’s king. Such moves occur in Dragon Variation, Sicilian Defense, and the Yugoslav Attack.

I hope that you got all the points. Now finally I am giving you a proper step by step guide or say set of rules which I developed researching about castling.

I myself follow these step by step guide and suggest that you should also follow while playing chess. I strongly believe that following this will surely help you and give you an extra edge while castling next time clearing all your confusions. So here it is!

So that’s it! Hope you liked this article as much as I liked to share with you. If you find helpful then please do share this article.

Now that you know everything about which side is best to castle below is a test 🙂 for you! Apply your skills and try to answer the question.

What do you think will be best, kingside or queenside castling for white?

This is from one of the games played by grandmaster Magnus Carlsen. White is Magnus Carlsen’s chess piece. So what have you thought till now? Will kingside be better at this position for Magnus Carlsen or queenside.

Hoping you have prepared your answer without cheating by scrolling down! So answer is Queenside!

If you got are right answer then congrats but if you got wrong then also don’t worry. Analyse where you is evaluated. By the way if you want you can check that out in a complete video analysis by clicking on the above source.

Now, below there are some of the common and frequently asked questions often asked beginners. You can check that out, might find find something helpful for you. Till then, thanks and have a nice day!

Can you castle both sides?

Yes, you can castle both kingside and queenside but only one at a time. Also, you need to make sure that the king or the rook has not been moved yet, the king is not in check, there are no pieces between them, and the castling move doesn’t put the king in check.

Can you castle queenside?

Yes, you can castle queenside provided you don’t violate the standard castling rules. You can castle only if the king is not in check, there are no pieces between the king and the rook, the king or rook hasn’t been moved yet and the castling move doesn’t put the king in check.

Can you kingside castle in check?

As per FIDE laws, you cannot castle when you are in check whether it is kingside or queenside. Castling in check, through a check, and into check is illegal in chess.

Can you castle with a queen?

Where does the king go when you castle?

Is Queen side Castle legal?