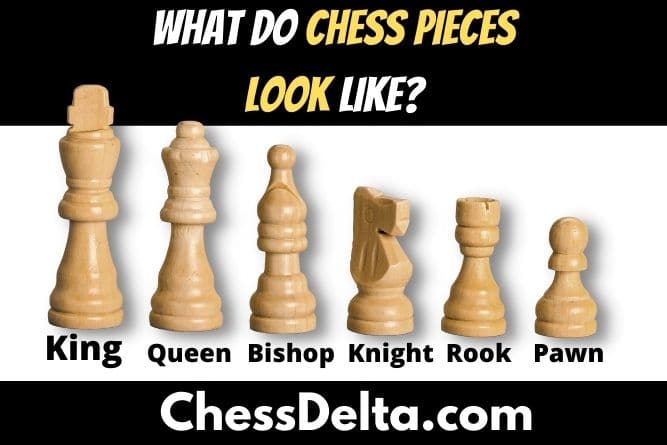 There are six different types of pieces in chess and they are the king, queen, bishop, knight, rook, and pawn. To better utilize the chess pieces in a game it is important to make yourself familiar with each one of them. So, what do chess pieces look like?

Chess is a two-player game that is played on a standard chessboard of 8 by 8 having 64 squares.

In a standard chess set, there is a total of 32 chess pieces, out of which each player gets 16 chess pieces.

Out of the 16 chess pieces, there are 8 pawns, 2 bishops, 2 knights, 2 rooks, 1 queen, and 1 king. Now let’s see how each chess pieces look and more information about them.

Let’s dive in and understand each one of these chess pieces in a bit more detail.

By the way, if you haven’t got a chess set yet then I highly recommend you to check out the best chess sets here on Amazon.

When a player’s king is a checkmated, the player loses the game. In fact, the main aim of a player in a chess game is to finally checkmate the opponent king and win the game.

However, despite being such an important piece the king is not the most powerful piece.

It has limited mobility on the chessboard. It can only move one square at a time in any direction. You can read about why is the king so weak in chess here.

And to learn about how the king moves in chess check out my article about it here.

The queen has the maximum mobility on a chessboard. It can move horizontally, vertically, as well as diagonally up to any number of empty squares. It can move in all directions. You can read more about how the queen moves in chess here.

Although a player has only queen at the start of the game. But note that you can also have more than one queen in chess by the process known as pawn promotion.

In pawn promotion, when a pawn reaches the other side to the end of the chessboard (last square) then the player can replace that pawn with either a queen, knight, rook, or a bishop.

In chess, a queen is really an important piece and in terms of chess piece value, it is assigned 9 points.

The rook can move horizontally or vertically up to any number of squares on a chessboard.

You can read my complete guide on how the rook moves in chess here.

A rook is also involved with the king in a move called castling.

Castling is a move in chess in which both the king and rook move simultaneously in a single move. There are two types of castling, kingside and queenside castling and you can read about both these types here.

A bishop can move only diagonally both forwards and backward but up to any number of vacant squares.

You can read about how the bishop moves in chess here.

A knight is a unique chess piece especially because it moves in an L shape pattern on a chessboard and also because it is the only chess piece that can jump over the other chess piece.

Check out my article on how the knight moves in chess here.

A pawn is the only chess piece that can’t move backward.

On its first move, a pawn can move two steps forward in a single move. After that, in the entire game, a pawn moves only one step forward.

You can read about how do pawn moves in chess here.

A pawn also has two other moves associated with it. One is en passant and another is pawn promotion.

How Do You Identify Chess Pieces?

Now, if you have got the general standard chess set then it would be quite easier for you to identify the pieces in them especially if you know how each one of them looks like.

But let’s say that you have got a bit creative kind of chess set in which the chess pieces are of different designs than what we talked about regarding the standard chess pieces. Then in that case it might be a little confusing for you to identify the chess pieces.

So if you come across any of such situations then here are some of my chess piece identification tips.

If you follow the above-mentioned tips then I think that you will be able to identify the chess pieces.

Now there’s also another way through which you can identify chess pieces and that is through their heights.

As per FIDE (International Chess Federation), the recommended height of the chess pieces are:

So now you exactly know about how the chess pieces look like. And I hope now you won’t have any issues while identifying any of the chess pieces in your chess set. Right? That’s it, Thanks!