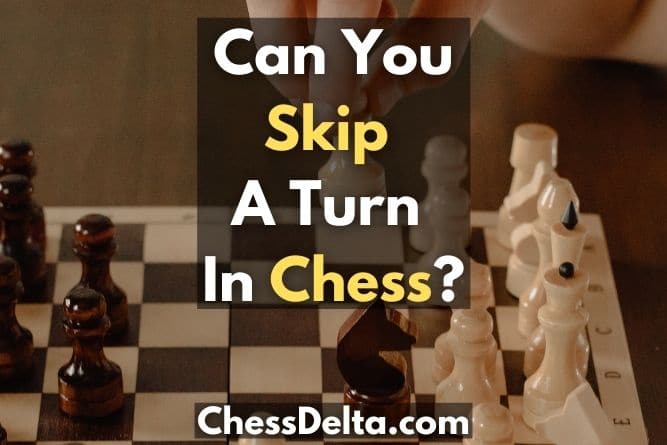 Has your friend told you that you can skip or forfeit a turn in chess? But, you are still in doubt and want to confirm it? Or maybe you are in a situation where skipping a turn would be a great choice? But, can you skip a turn in chess?

No, you can’t skip a turn in chess. As per the standard rules, once you touch a piece with the intention to move then it is compulsory to make that move. If you aren’t able to make a move, then it is either the condition of a checkmate or a stalemate in which the game ends immediately.

However, note that you can make a waiting move that does not change the dynamics of your position.

Further in this article, I’m going to explain each one of these concepts in detail, so keep reading till the end.

What is the Touch Move Rule in chess?

The touch move rule in chess is a rule according to which a player has to move a piece if he or she touches it deliberately. This rule prevents disputes among the players in the standard tournament chess games.

You may not be familiar with this rule if you are new to chess because in casual games this is practiced less. However, in tournament games, the touch move rule is strictly followed and its violation is considered as an illegal move.

Now, I know you may be thinking what happens if you touched a piece and it can be neither moved nor captured legally? So relax, because in that case there’s no penalty. (As per the touch move rule Wikipedia)

Also, you may be thinking about what to do when you want to adjust a piece, right?

So for that case also there’s a procedure. You have to inform your intention of adjusting the piece by saying words like ‘j’adoube’ or ‘I adjust’ just before touching the piece. This is accepted as the standard rule.

You can read more about the touch move rule and its key points in my article why do chess players touch the pieces.

What is a Checkmate in chess and why you can’t move when it occurs?

Checkmate means your king is in attack (check) and there’s no way left to get out of it. As per the standard rules, the game immediately ends when you are checkmated and you lose the game.

So obviously you can’t move when you are checkmated.

As you can see in the image, the black king is checkmated by the white bishop and the white queen. There are no legal moves left for the black to make in this situation.

The player with the black piece can’t move and the game ends immediately in the given position of checkmate.

Always remember, the player who checkmates his or her opponent wins the game while the player getting checkmated loses the game.

What is a Stalemate in chess and why you can’t move when it occurs?

Stalemate is a condition in which your king is not in check but you don’t have any legal moves left so you are unable to make any move.

As per the standard rules, whenever a stalemate occurs, the game ends in a draw immediately.

So the black king can’t be moved. Moreover, the piece of black such as the two pawns are block.

Long story short, here the black king has no legal moves left to continue the game so the game ends immediately.

You can read more about the difference between stalemate and checkmate.

Now the question comes what is a waiting move, right? So let’s discuss that!

What is a Waiting Move in chess?

A waiting move as the name suggests is a move that you make without any intention but, just to wait for the next move.

For example, in the checkmating with two bishops there arises a situation in which the checkmate can’t be delivered immediately because that would lead to a stalemate.

And chess players, who are in a winning position always try to avoid stalemate because just think who want to get a draw if they can win the game, isn’t it?

So now the only option to avoid stalemate is to pass the move and checkmate the opponent in the next move. But as you already know, you can’t pass a turn in chess.

Therefore the only option left is to make a waiting move. There is also a related concept of zugzwang which you must know. So let’s discuss that as well.

What is Zugzwang in chess?

Zugzwang is a condition in chess in which you are forced to make a bad move because it is the only move that you can make.

The word ‘Zugzwang’ is the German word for “compulsion to move”. You can watch this video by Howcast to learn more about it.

That’s it! Hope you found this article helpful. You can also read other informative articles by me as follows:

Do you have to move a chess piece if you touch it?

Are you allowed to skip a turn in chess?

No, as per the standard rules it is not allowed to skip or pass a turn in chess. Once a player touches a piece with the intention to move then that player is supposed to move that piece if it legal to do so.