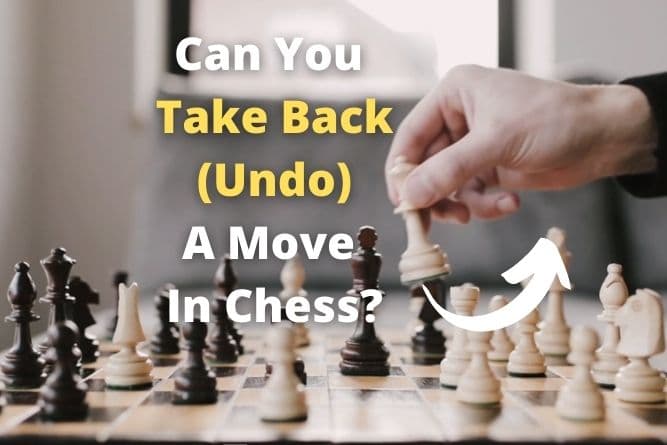 What happens when you make a bad move? You would immediately try to undo it and make any other better move, isn’t it? But then the question arises, can you take back a move in chess?

In casual games and in some online platforms where you have the takeback option available, you can take back a move. But in tournament games, as per the standard rules, once you touch a piece with the intention to move it then it is mandatory to do so.

Ahead I am going to discuss takeback in online chess platforms, takeback in tournament games along with all the important rules you should know. Even if you are an absolute beginner, reading this article many of your doubts will get solved. So keep reading till the end!

If you play chess online then you may be already familiar with chess.com – one of the most popular chess playing and learning websites online. Now while playing there the situation may arise where you would want to take back or undo a move. But is this possible?

Yes, you can take back on chess.com but only if you are playing an unrated game in daily chess with the take-back option enabled.

Remember that in live chess games you are not allowed to take back a move. Whenever you play a takeback enabled chess game, you will see an option for it.

Similarly, the same thing will happen if the previous move was made by you. For any clarification, you can also chat with your opponent in the chat box window.

In other online chess playing platforms such as lichess, you can request your opponent for a take-back. If he/she feels your request genuine then he/she might allow it. But some players also abuse this system and so many feel reluctant to allow the take-backs.

Read Related: Can You Pass A Turn In Chess?

Should You Take Back A Move In Online Chess?

If a mouse slip occurs or due to some bug in the user interface of the playing platform, a player makes a bad move and wants to undo it. Then, in such cases take back can be allowed in online chess.

But since in real tournament games, there is no such take back thing available. Once a piece is released on its destination square then it is considered a move and can’t be undone.

This is also known as the touch-move rule. (discussed ahead in this article). So generally chess players avoid doing it.

If you are playing a casual game then it is totally up to you, whether to allow you to undo a move or opponent.

But if you feel that your opponent really did a genuine mistake or if you are playing with someone who is a complete beginner, whom you are teaching chess then you can be a little generous.

Rest then that, since standard rules don’t allow such things you should avoid take back in online chess especially if you are playing a really serious game.

Why Take Back Is Not Allowed In Tournaments?

Take back is not allowed in real tournaments simply because it would cause a lot of disputes between the players. For example, a player may distract the concentration of the opponent by touching and moving many pieces back and forth until making their final move.

Though this may not seem like a big problem if you play chess casually. But in fast format games such as blitz when you have very little time to make a move, the players move the pieces very rapidly.

In such scenarios touching one piece and moving a different piece can distract the attention. Also, other kinds of disputes can occur hence taking back a move is considered an illegal move.

Read My Article: What Is Illegal Move In Chess? (With Examples)

What Is the Touch Move Rule In Chess?

As per the touch move rule, if a player having the move intentionally touches a piece then he or she has to move or capture that piece if it is legal to do so. So if you make a move by mistake then there is no scope to undo it according to this rule.

In chess tournaments, the touch move rule is followed very strictly. Even if you want to adjust the pieces you must declare your intention by softly uttering ‘I adjust’ or ‘j’adoube’. In case you don’t do so then you would have to move that piece whether you wish or not.

Also, you can make any move in chess with one hand only otherwise it will be considered an illegal move. There is a common doubt that can we castle with two hands, and the answer is no. This also considered a violation of the touch move rule.

In fact, in a tournament chess game, a famous player did this mistake which I have discussed in my article Is Castling With Two Hands Illegal? (Explained).

There is a complete handbook called FIDE Laws Of Chess in which all such standard rules and regulations are mentioned in the form of articles.

So in that, under article 4 there are guidelines regarding how to move the pieces and also the touch move rule.

To read more about it in a simplified format check out my article Why Do Chess Players Touch The Pieces? (Explained With Touch Move Rule).

So, what does take back mean in chess? In chess, Take Back means taking back a move if it was made by mistake. In online platforms where the ‘Take Back’ option is available, it can be done but in tournament games it is not allowed because it violates the touch move rule.

So that’s it! Hope you liked reading this article. If you found this helpful then do share it with others. Thanks!

No, there is no 13 move rule in chess. There is a 50 move rule as per which if no pawn movement and no capture is made within the last 50 moves then the player can claim a draw.

Also, there is a 75 move rule as per which the game ends in a draw automatically if no pawn movement and no capture is made within the last 75 moves.

What is the 50 move rule in chess?

50 move rule means if no pawn movement and no capture is made within the last 50 moves then the player can claim a draw. This rule was made to prevent the chess game from continuing for long hours.

To get more in-depth knowledge about the 50 move rule and the 75 move rule, then check out this article in which I have simplified everything for you.

How long do you have to move a piece in chess?

Depending on the type of chess game you are playing, in major chess events by World Chess Federation FIDE, a player gets 90 minutes to make the first 40 moves, then 30 minutes to complete the rest of the game along with the addition of 30 seconds for each move starting from move one.

But in other fast format games such as bullets blitz and rapid the time you have to make the moves as follows:

Read Related Article: What Happens When Chess Clock Runs Out? (With Rules)

Can you pass and choose to move no piece in chess?

No, if it is your turn then you are supposed to make a move. In case there is no legal move left then the game ends. For example, you get stalemate or when your king is checkmate then you can’t make a legal move so the game immediately ends

The stalemate means when the king is not in check but there are no legal moves left for the player to continue the game. So technically you neither lose nor win the game.

Hence whenever a stalemate occurs the game ends in a draw. Whereas when you get checkmated then you simply lose the game.

You can check my article Stalemate Vs Checkmate: A Helpful Guide For Beginners! to know more about stalemate and checkmate