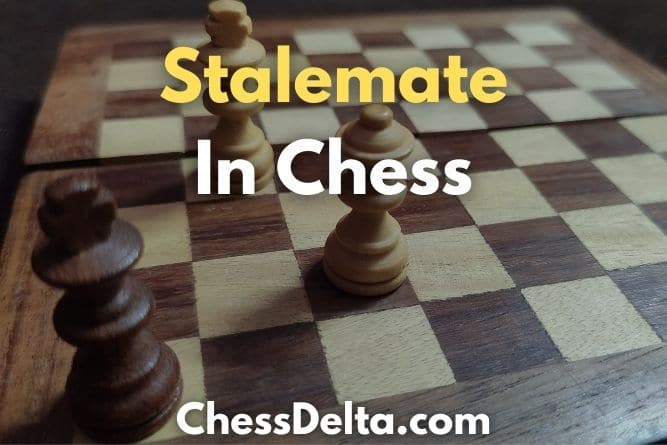 Okay, so you have started learning how to play chess. But now you came to know about stalemate, right? So, what is a stalemate in chess?

Stalemate is one of the types of draws in chess. A stalemate occurs, when a player’s king is not in check but the player can’t make any legal moves to continue the game. So whenever a stalemate occurs, neither side wins or loses and the game immediately ends in a draw.

Here’s a video from Chess 101 YouTube Channel, about what is stalemate in chess. You can watch it to get the understanding of stalemate.

What Causes Stalemate In Chess?

Generally, the stalemate occurs when a player doesn’t give much space to the king to move. For example, a queen can control many squares at a time. So not using it wisely can block all the squares near the king, except the square where the king is standing remains safe, and thus result in a stalemate.

So black king is not in check because the square where it is standing is totally safe. But the black player doesn’t has any legal moves to make. And thus, a stalemate occurs.

Now, let’s suppose that you are playing with your opponent but you in a losing position. And suddenly stalemate occurs which results in a draw.

On the other hand, if you are in a winning position and your opponent in a losing position. And you are just about to win the game but then suddenly you make some moves which results in a stalemate and hence draw.

So in that case, would you prefer winning the game? Or just satisfy with the result as a draw due to stalemate? Most probably you would like to win the game, right?

So it is quite important to stay alert to avoid unwanted stalemate. I highly suggest you to read my article on how to avoid stalemate in chess.

What Is The Rule Of Stalemate In Chess?

According to the FIDE Laws Of Chess,

“The game is drawn when the player to move has no legal move and his king is not in check. The game is said to end in ‘stalemate’. This immediately ends the game, provided that the move producing the stalemate position was in accordance with Article 3 and Articles 4.2 – 4.7.”

In simple words, when the player has the turn to move but he or she doesn’t has any legal moves to make and the king is also not in check. Then, the game ends in a draw it is said to be ended in a stalemate.

However, the move producing the stalemate must be a legal move that follows the rules of chess as mentioned by the FIDE laws of chess.

One very important thing you should remember is not to confuse stalemate with a draw.

Remember, stalemate is only one of the ways a game can end in a draw.

There are several different ways like draw by agreement, draw by insufficient mating material, draw by 50 move rule, draw by threefold repetition. Check out my detailed article about the difference between stalemate and draw.

Also, stalemate is a different from a checkmate.

Moreover, when checkmate occurs one side wins and another side loses. But in stalemate, none of the sides wins or loses, since the game ends in a draw in case of a stalemate.

You can check out my article on stalemate vs checkmate.

Example Of Stalemate In Chess

In the above image as you can see black has so many chess pieces left on the board. Whereas, in case of white, only the king is left. Also, a white pawn.

So in this situation, if the black used its pieces wisely it could have won the game. This is because white has very few pieces to defend the attack of the black, isn’t it?

But black makes a move which results into the position as shown in the image.

In the given position, the black queen as well as two black rooks are blocking the squares near the white king.

The only square where the white king is standing, is safe from any kind of attack. Also, the white pawn is blocked.

So neither the white king is in check nor the player with white pieces has any legal moves left to make. This clearly fulfills the condition of stalemate, right?

Thus, stalemate occurs in the given situation. The white king gets stalemated and the game ends in a draw.

Now let’s discuss about the history of stalemate. If you have found stalemate interesting then I think you would also like its history. So let’s discuss!

History Of Stalemate In Chess

As per Wikipedia, in previous forms of modern chess such as chaturanga, stalemate was considered as a win for the side administering it.

This continued in chess as played in the early 15th century Spain.

But, Lucena regarded stalemate as an inferior form of victory. And this continued in Spain as late as 1600.

Later on, in England, from 1600 to 1800, stalemate was considered as a loss for the player administering it.

Afterwards, before the 1820, that rule disappeared in England, being replaced by the French and the Italian rule which considered stalemate as a draw.

Now, in the present time also stalemate is considered a draw.

So this was the history of stalemate.

You may also like to check out my article on who invented chess.

So I hope now you know what is stalemate in chess. Please share this article if you found it helpful. Thanks!

Is Stalemate Considered A Win?

No, stalemate is not considered a win. Whenever a stalemate occurs by a legal move, then the game ends in a draw which no side wins or loses the game.

Why Did Stalemate Happen In Chess?

Stalemate generally happens when the king doesn’t gets enough room to move. For example, when a player doesn’t move the queen then it can block all the squares near the opponent king and leaving only the square where the opponent king stands as a safe square, which can result in a stalemate.

What Happens When A Stalemate Occurs In Chess?

When a stalemate occurs, no player can win or lose and the game immediately ends in a draw. However, the move that produces stalemate must be a legal move.

Why Is Stalemate Not Checkmate?