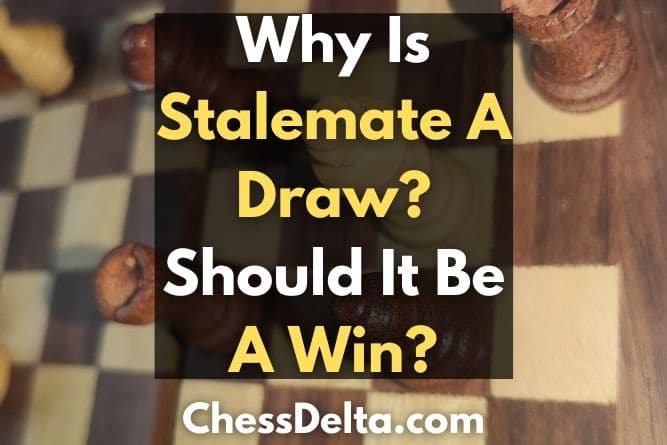 Okay, so if you are playing chess for some time then you probably know about the stalemate. It is really frustrating when you are about to win but then, suddenly the game ends in a draw by stalemate. So, why is stalemate a draw?

Although apart from checkmate there are also other ways to win chess such as when your opponent resigns, when the time runs out, and when the player makes illegal moves.

I have talked about all these in detail, in my article about how many ways you can win chess.

But stalemate is a condition in which neither of these things happen. So we do not consider it as a win.

Let’s dive in deeper and see what was stalemate thought to be historically and also should we consider it as win.

Historical facts about the stalemate

In the past, a stalemate was not considered a draw.

In historical forms of chess such as chaturanga, a stalemate was rather considered as a win by the side administering it.

And this practice continued for a long time but later it was started to be considered as an inferior win.

So the question comes, should the stalemate be considered as a win for the side causing it.

Should stalemate be a win?

This is a very debatable topic in the chess community. Some consider it should be a win while others don’t. For example, Grandmaster Larry Kaufman considers stalemate as a draw totally illogical. Whereas Grandmaster Larry Evans considers that the proposal to make a stalemate a win for the stalemating player would radically alter centuries of tradition and make chess boring.

On the Wikipedia page of stalemate, under the proposed rule change, you can find their statements.

Now coming to my opinion, I think stalemate should not be a win because it is already standardized so changing the rule will create many problems.

If stalemate would be a win, then several endgames in which, up till now we considered stalemate as a draw will result in a loss for the side getting stalemated.

It forces the player to remain attentive until the game ends and also gives hope to a losing player from not resigning early.

Many arguments have been given for this and from my perspective, I feel that stalemate should not be considered as a win.

The rule should remain as it is since it is the same for all of us.

We should rather ask ourselves to focus during the game to avoid it and accept it as a challenge. Ultimately the challenges in a game only make it interesting. Right?

Why is stalemate not checkmate?

So from the above two examples it is very clear why stalemate is not checkmate.

That’s it! I hope you find this article interesting. If it was helpful then please do consider sharing it with others.

And before you go, if you are interested to learn more about the stalemate then I highly recommend you to check out my articles.