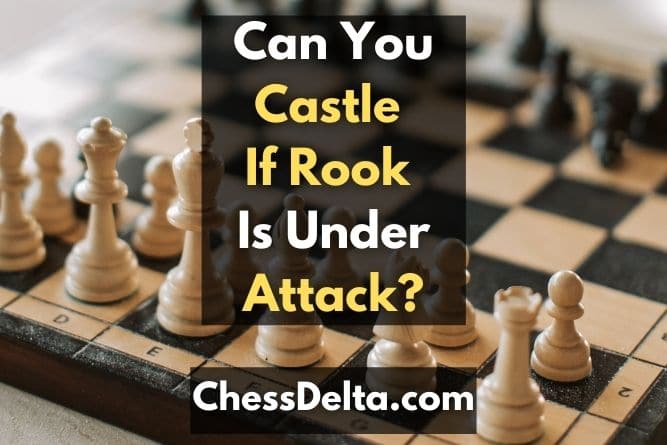 One of my readers once asked me that can we castle if the rook is threatened. I thought this was a good question and many chess enthusiasts maybe also having and that’s how I ended up writing this article. So, can you castle if your rook is under attack?

There are four rules of castling in chess that you need to follow. If you violate any of those four rules then that castling would be considered an illegal move.

What are the four rules of castling?

1. Castling is allowed only if either the king or rook has NOT been moved from their starting position.

Explanation: So for example, if you decided to castle on a particular side but you have already moved the rook of that side. Then in that case you can’t castle on that side.

Note that in chess you can castle on both sides: one is kingside castling and another is queenside castling.

However, if the other side rook has not been moved yet and also the king is not moved, then you are allowed to castle on that side.

2. The space between the king and the rook must be vacant for castling.

Explanation: If there is any other chess piece present between the king and the rook, then how can you castle, right? The king and rook can’t jump in chess.

So they can’t hop over the pieces between them and complete the castling move. The only piece that can jump over other pieces is the knight.

3. Castling is temporarily prohibited if the king is in check

Then it is mandatory that you first respond to it and take your king out of the threat. After that only you are allowed to castle (provided you follow the other rules of castling as well).

As per the standard rules of chess,

If your king is in check then you have to first take the king out of the check and then only make any other move.

Also Read: How does the rook move in chess?

4. Castling is can’t be done if the squares through which the king is going to pass and the square the king occupies is under attack

Explanation: There is one golden rule of chess,

You can’t make a move intentionally that puts your king in check.

So according to this rule, if the squares through which the king is going to pass, are under the attack of another opponent chess piece, can the king castle?

No, because it would put the king in check which is considered an illegal move in chess.

Also, the square on which the king is going to land if under attack, then can you castle? No!

So always remember this phrase and you will never make mistakes:

You can’t castle under check, through check, or into check.

I have written an in-depth article, can you castle out of check and in that I have talked about this rule in more detail. So you can check that for further information.

Now as you can see in all these four rules there is no mention of rook under attack, right? And that’s why you are allowed to castle even when your rook is under attack.

Now let’s see two interesting real-life examples in which the players had the same doubt of whether castling is allowed when rook is threatened. Let’s start!

Example-1: Castling was allowed even if the rook was threatened

Let’s clarify this with an example of a real chess game.

In 1974 there was a chess match between two great grandmasters, Victor Korchnoi vs Anatoly Karpov. (Don’t worry, if you don’t know about them then also you can get an idea by studying this incident.)

During this match, Korchnoi asked the arbiter if he could do castling on the 18th move. He was confused because the rook was under threat by his opponent’s bishop.

But to his astonishment arbiter said it was legal!

This was a very interesting incident because even grandmasters sometimes forget the rules. (After all, they are also humans!)

Example-2: Castling was allowed even though the rook had to pass through the attacked square

Now another question that you might ask is, can you castle when the squares through which rook is going to pass is under attack? So let’s discuss that as well.

Yes, you can castle even if the square through which rook is going to pass is under attack.

In a chess match between Otto Feuer vs Alberic O’Kelly de Galway, the adjacent square of white’s rook was under the control of black’s rook. Although castling was allowed.

Refer this image to understand properly.

From the above two examples, it is very clear that castling can be done even when the rook is under attack or threatened, or any other square where the rook is going to pass is also under attack.

So that’s it! I hope you understood everything clearly. If you found this article helpful then please do share it with others. And if interested, you can also check out my following article related to castling.

Can a rook be called a castle?

No, a rook should not be called a castle because as per the standard chess terminology a rook is called a rook. Many chess players often call a rook a castle due to its resemblance to a castle but it is considered informal and wrong.

Can you castle if you move your rook?

No, you can’t castle if you move your rook. As per the four rules of castling, if either the king or rook have been moved then castling is not allowed.

When can you not castle in chess?