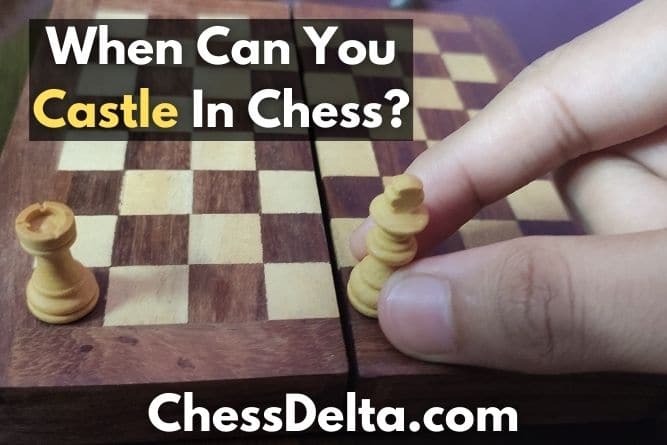 You might already know about castling and its two types, kingside and queenside castling. But the problem is, you are not quite sure when can you castle and when can you not castle in chess, right? Don’t worry, you are in the right place!

When can you castle in chess? You can castle only when the king and rook haven’t been moved yet, the space between them is empty, the king is not in check, and castling doesn’t put the king in check.

Here’s a table that shows when castling is allowed and when it is not allowed.

Can You Castle At Any Time In Chess?

No, you can’t castle at any time you want in chess. Only when you fulfill the rules of castling, you are allowed to castle. Moreover, once you castle, you already move your king and rook and thus you are no more able to castle again.

According to the FIDE Laws Of Chess, you LOSE the right to castle:

So basically there are two key concepts you must remember. When do you Lose the right to castle and when Castling is temporarily Prevented.

Losing the right to castle means, you would completely lose the chance of castling entirely for the given game if respective situations occur. (Like the king or rook already moved)

Whereas, castling being temporarily prevented means as long as the respective situations persist you can’t castle. But as soon as that situation goes away you can castle as long as other rules are followed as well. I hope you understood my point.

When You Can Castle In Chess:

This situation is perfect for castling. Here both the king and rook are in their original position which means they haven’t moved yet.

The king is not in check. And castling wouldn’t put the king in check since there’s no opponent piece that can attack the king.

Also, the space between the king and rook is completely empty. Thus, in the given situation, you can castle.

When You Can’t Castle In Chess:

In the above situation, you can’t castle as the king has already been moved. So right from the beginning of the game, try not to move your king if you want to castle.

However, do note that in the game of chess each side has two rooks.

So if you have moved one rook already but still another rook hasn’t been moved yet. Then, you can castle your king with that unmoved rook as long as all other conditions of castling are fulfilled.

In this position, notice carefully that white’s opponent chess piece which is the black queen is already attacking the square through which the king will have to pass through while castling. So what do you think, will it be allowed to castle in this situation?

And the answer is no, you can’t castle in the above position.

Here the in the above situation, the square through which the king has to pass while castling is attacked by the opponent chess piece, isn’t it? And so you can castle in this situation.

In this situation, moving the king would put it in check. So it is not allowed to castle in this position.

In the given situation, you can’t castle because the place between the king and rook is not empty. Remember, a king can’t jump over the other pieces nor the rook.

So if there is a chess piece between them then castling can’t be done. However, if that piece is removed and the space between the king and rook becomes vacant then you are allowed to castle as long as other rules are also followed.

In short, a player is allowed to castle when the king and rook haven’t moved yet, the king is not in check, castling doesn’t put the king in check, and the space between the king and the rook is empty. However, if any of these conditions aren’t fulfilled then the player can’t castle.

So I hope now you exactly know when you can castle and when you can’t castle. If you found this article helpful, please share it. Thanks.