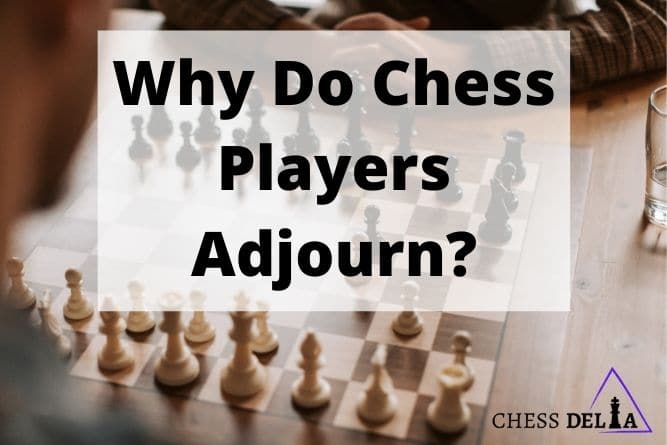 If you have seen the chess games before the 90s or have read them in some books, then you might have seen that some of the games were adjourned. Do you know what does it actually mean? Why players do it? Even in some movies like Queen’s Gambit, you may have seen this thing.

So, why do chess players adjourn? Chess players adjourn because some games are quite long to be finished in a day. So they postpone it to the next day. After the advent of chess engines and shorter time controls, adjournment rarely happens in a game.

The correct procedure for adjournment is, whenever it is made, the player with the turn to move, is supposed to write what the next move would be (which is also called a sealed move) secretly in the scoresheet, put that in a sealed envelope along with score sheet of the opponent, and submit it to the arbiter. Thus to adjourn the game, chess players seal their moves.

The word ‘adjourn’ means suspend or discontinue. So whenever a game extends the prescribed time duration that is suitable for a single day, the adjournment is made.

After that, both players leave the playing area and go back to their rooms. They take rests and then come back again to play that game the next day.

FIDE is the International body that governs and manages all the chess competitions and their rules-regulations. The standard rules of chess are mentioned in the FIDE Laws Of Chess.

In that, under Guideline 1, there is a complete description of the adjourned games. Here are the key points from that:

Also Read My Article: Why Do Chess Players Hit The Clock? (Explained!)

Adjournment In The Movie Queen’s Gambit

In the movie Queen’s Gambit, Beth played the final game against Borgov in Russia. In that Borgov called for the adjournment.

Agadmator’s Chess Channel has made a complete video of the final match played between Beth and Borgov. You can watch this video to get the full video analysis of the game and see how adjournment occurs during the game.

Why There Are No More Adjournments Nowadays?

During the past, roughly before the 90s, computers in chess were not so powerful. Moreover, chess games naturally extended longer because time controls were not developed so much.

But nowadays, we have digital clocks that can measure increment and everything very precisely. And time controls are also shorter nowadays which makes the game end faster. Thus reducing the chances of adjournment.

Moreover, chess engines and computers are very powerful. So it would be meaningless to adjourn the game in today’s time.

This is because the players would simply go to their rooms, feed the moves in the engine (the chess program), and get the answers.

By doing this the fairness of the game would be completely lost. It would feel like cheating. Isn’t it?

In the olden days, there were no such powerful computers. The players used to ask their helpers to analyze the game for them.

But now using computers, would be totally against ethics. And due to all these reasons, adjournments in chess are rarely seen nowadays.

So that’s it! If you liked reading this article then you will also like to read my other related articles.

Thanks, And Good Luck! And yes, if you are new to chess then forget to give it a try because you will really enjoy it.