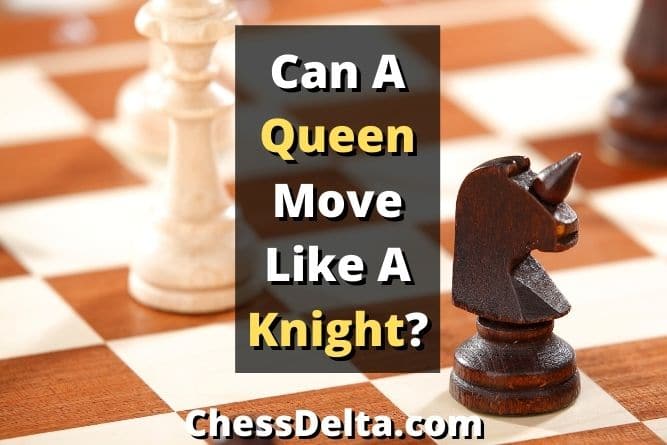 When you first start learning about chess pieces and their moves, a question may you may wonder, Can a queen move like a knight?

No, a queen can’t move like a knight. As per the standard rules of chess, a knight moves in an L shape whereas, a queen moves vertically, diagonally as well as horizontally but in a straight line only.

A queen has the combined power of both rook and bishop. It can move up to any number of squares and in any direction in a single move. But it can’t move or jump over the pieces like a knight.

Now, you may think that why the queen is not allowed to move like a knight (horse). So let’s discuss that but wait, let’s see in brief, how the queen and the knight move in chess.

How does the queen move in chess?

As you can see in the image, a queen can move vertically, horizontally as well as diagonally upto any number of squares in a straight line.

A bishop can move only diagonally and the rook can move only horizontally and vertically. But the queen has the combined power of both.

Since the queen has so much mobility on a chessboard, it is also considered the most powerful chess. You can read more about why the queen is so powerful in chess here.

The queen can capture any enemy piece that comes on its way. But remember that in chess, you can only capture a single piece in a single turn. You can’t double kill in chess.

If interested, you can check out my article on how the queen moves in chess here.

How does the knight move in chess?

Knight moves in an L shape, as you can see in the image. First it moves two squares in one direction and then one square to the immediate adjacent square and thus making the L shape pattern.

A knight can capture any piece that sits on the square that it is going to land. A knight is the only chess piece that can jump over the other pieces.

You can read more about the knight moves in chess here.

Now that you know how the queen and knight moves, let’s discuss the most awaited question.

However, this is just the logical reason. Historical background I’m going to discuss very soon so continue reading.

According to current powers the queen has in chess, it can checkmate the opponent’s king but still needs the help at least one supporting piece.

But if it was allowed to have the power of knight as a well then just imagine, how easy it would be for such a powerful queen to checkmate the opponent’s king. Perhaps even without the help of any other supporting chess piece.

So tell me, the queen is already the most powerful chess piece and if it was allowed to move like a knight then wouldn’t it disturb the balance in the game?

You would be amazed to know that historically, the queen was rather the weakest chess piece. The moves of the queen were limited to only four squares diagonally adjacent to the square it was placed.

Moreover, during that time the queen was not known as a queen but was called the ‘Mantri’ which means the advisor to the king.

Later, during the 15th century (as per Wikipedia) the queen’s move took its current form and it gained the combined power of both rook and bishop.

As per Wikipedia, In Russia, a queen was allowed to move like a knight for a long time. But then, some players disapproved of the fact that the queen could also jump just like a knight.

After the chess rules have been standardized worldwide, now, the queen can’t move like a knight. However, in some chess variants, you can find a fairy chess piece known as ‘Amazon’.

According to Wikipedia, the fairy chess piece “Amazon” is also known as queen+knight compound.

However, it can do so, while moving like a knight. So I hope you are understanding my points.

And in case you don’t know, a chess variant as the name suggests, is a game inspired by chess but still, there are some differences in it.

And, a fairy chess piece is a piece that is not used in conventional chess games but only used in chess variants and certain chess problems.

That’s it! Hope you found this post helpful. You may also like to check out my following articles:

No, a queen can’t move like a horse in chess. A horse which is also called a knight, moves in a typical L shape and can also jump over other pieces whereas, a queen moves vertically, diagonally, or horizontally, up to any number of squares but only in a straight line.

No, a king can’t move like a knight. A king can move only up to one square in any direction whereas a knight moves the first two squares straight and then one square on the side like an L shape.